12 Years Of The World’s Top 10 Most Innovative Countries 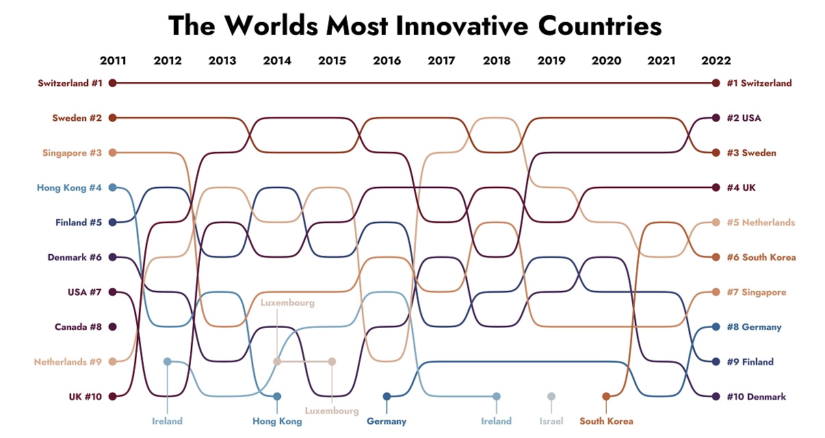 Every year, the UN’s World Intellectual Property Organization (WIPO) scores countries on how innovative their economies are with the Global Innovation Index.

This article was written by Gilbert Fontana and originally published by Visual Capitalist.

The Index scores countries on indicators of a strong innovation economy. These include R&D spend, general market strength, patent systems and output, and local labor capital. And though a few countries consistently rank high, others are moving in and out of the top 10 rankings.

This graphic from Gilbert Fontana details the top 10 most innovative countries in the UN’s WIPO Global Innovation Index from 2011-2022.

Over the last 12 years, Switzerland has ranked at the top of the innovation index on the strength of its IP laws and local economic strength.

But much of the remaining top 10 have been in flux:

In addition to Switzerland, seven other countries have been in the top 10 in each year, including Sweden, Singapore, and the United States.

Others have dropped out of the top 10, such as Canada in 2012 and Ireland in 2018. But that let up-and-comers like South Korea and Germany grab one of the top 10 spots. In total, 14 countries have ranked in the top 10 most innovative countries in the world over the time period covered in the visualization.