Home Prices Sink In Every Major Market, What About Year-Over Year? 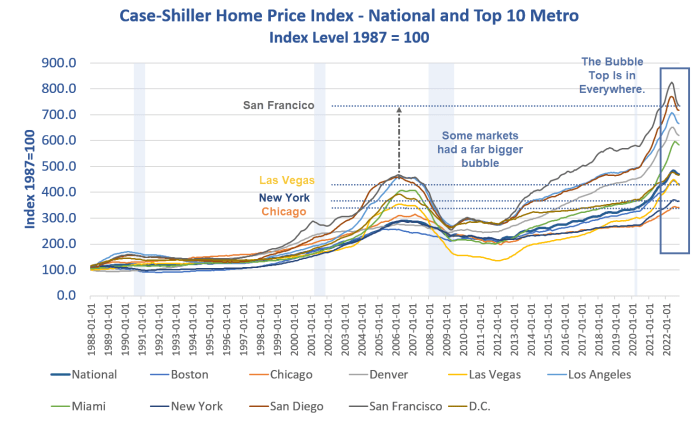 The latest Case-Shiller numbers came out today. They are for October representing data for three months prior, this very lagging.

The Fed ignored all three occasions hoping to make up for “lack of inflation”. The Fed “succeeded” beyond it’s wildest dreams.

Home prices are falling fast in every market with San Francisco leading the way and Miami lagging badly.

Don’t believe any of that. Those prices are very stale.

I suspect that at a minimum, San Francisco, San Diego, and Los Angeles are all in the red with many more cities approaching that level.

Zillow says that prices in 99 percent of the nations 400 largest housing markets are still up year-over-year.

I do not believe that either although Zillow claims its methodology is more timely.

Amusingly, last month Zillow said the home price correction is over. Zillow then retracted that statement but is still talking about a bottom near at hand.

What a hoot. Zillow is acting like a housing cheerleader even more so than the National Association of Realtors.