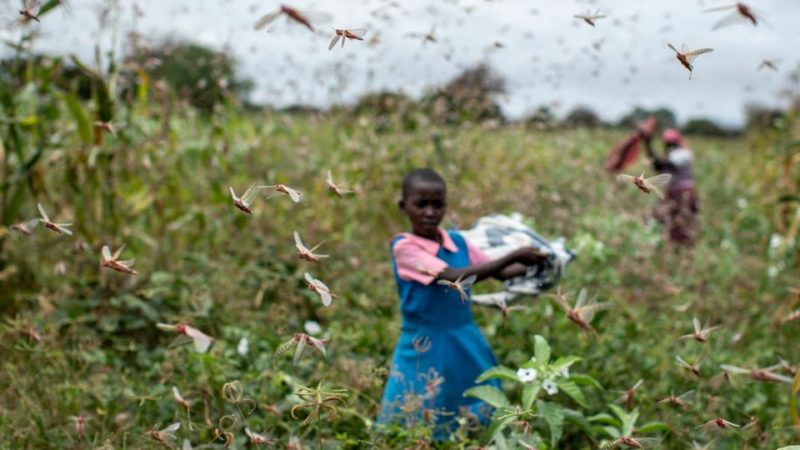 The locusts are back, and they are hungry.  Last year, an unprecedented plague of locusts devastated crops in eastern Africa, across the Middle East and throughout much of Asia.  Many were hoping that it would just be a one year phenomenon, but now the locusts have returned and one British news source is using the world “biblical” to describe this second wave.  At this moment, the Horn of Africa is being hit the hardest, and the UN is warning that this new infestation “threatens the livelihoods of more than 39 million people”…

According to the UN Food and Agriculture Organisation (FAO), the next generation of locusts threatens the livelihoods of more than 39 million people in Ethiopia, Yemen, Somalia, Sudan, and Kenya. Over recent months, the pests have been combated on 1.3 million hectares of land in the Horn of Africa. However, in northern and central Kenya, more than 15 districts, including many new areas, have already been severely affected by the second wave of locusts. Around 1.9 million people were already living in a precarious nutrition situation, which could now dramatically worsen.

One reporter recently had the opportunity to fly with a pilot that is tracking locust swarms in Kenya, and he was stunned when they came across a “swarm about twice the size of the City of London ready to devour every bit of vegetation in its wake”.

Can you imagine what it must be like for local farmers when millions upon millions of locusts suddenly show up in their area?

These locusts can literally wipe out an entire farm in as little as 30 seconds, and these swarms are capable of traveling vast distances in a single day…

Swarms can fly up to 150 kilometres a day with the wind, and a single square kilometre swarm can eat as much food in a day as 35,000 people.

More than half of the counties in Kenya have already been hit, and many local farmers have had their fields completely devastated.

For example, 70-year-old Isabella Karoki says that she has “lost everything”…

Seventy-year-old Isabella Karoki has never witnessed such a devastating invasion of desert locusts.

“I have lost everything. What do you expect me to eat?” said Karoki, who lives in central Kenya, an agricultural region known for its rich volcanic soils and moderate rainfall.

I honestly do not know what she is going to eat.

When you are a poor farmer and your existence for the entire year depends on what you grow, a disaster of this magnitude can be absolutely crippling.

Hopefully some assistance will be made available, but millions of other farmers in the Horn of Africa will be in the exact same boat.

Of course the locusts eat everything that was meant for livestock as well, and one local dairy farmer named Thomas Mwerore doesn’t know what he will do now…

Dairy farmer Thomas Mwerore is among them.

“The locusts have eaten all the pasture that was there for our livestock,” the 62-year-old told DW. “We are suffering. Even food that we humans eat isn’t there, what can we do?”

Needless to say, this new wave of locusts is going to make the emerging global food crisis even worse.

In 2020, a combination of the COVID pandemic, the locust plague and other factors pushed global hunger to levels that we had not seen in decades.  According to the UN World Food Program, nearly 700 million people were suffering from hunger late last year…

The numbers are staggering— as reflected in the ongoing coronavirus pandemic which has triggered a new round of food shortages, famine and starvation.

According to the Rome-based World Food Programme (WFP) 690 million people do not have enough to eat while 130 million additional people risk being pushed to the brink of starvation by the end of the year.

The head of the World Food Program says the Nobel Peace Prize has given the U.N. agency a spotlight and megaphone to warn world leaders that next year is going to be worse than this year, and without billions of dollars “we are going to have famines of biblical proportions in 2021.”

When David Beasley made that statement, he didn’t even know that another massive plague of locusts would be hitting Africa this year.

Unfortunately, this new locust plague could soon escalate dramatically.  According to an expert in Kenya, his team is expecting that March and April could be even worse…

“We expect the worst if the young hatch in March and April,” said Kelvin Shingles, Kenya Country Director for German Agro Action (Deutsche Welthungerhilfe), an aid organization, in a press release.

For a long time, I have been warning that global food supplies were getting tighter.

Here in the western world, we can still go to the grocery store and fill up our carts with plenty of food, and so it can be difficult for us to have sympathy for those that are literally facing starvation on the other side of the planet.

But the truth is that it is happening, and the number of people that are suffering from hunger is going to continue to grow.

Even in the best of times we have struggled to feed everyone on the planet, and these are definitely not the best of times.  Even the UN is warning that “famines of biblical proportions” are coming, and the suffering that we will witness will be off the charts.

Here in the United States, our food distribution systems have been rattled by the events of the past year, but there is still lots of food on the shelves.

Of course it is quite true that economic suffering is on the rise, and we have seen a number of instances where Americans have been forced to wait in lines that are miles long at local food banks around the nation.

And it is also undeniable that food prices have been rising aggressively, and this will become an even greater concern as time rolls along.

But for now, let us be thankful for what we still have, and let us also pray for those that are suffering on the other side of the globe because these locust invasions are truly, truly awful.