A Debate Over Excess Savings, How Much Stimulus Still Hasn’t Been Spent? 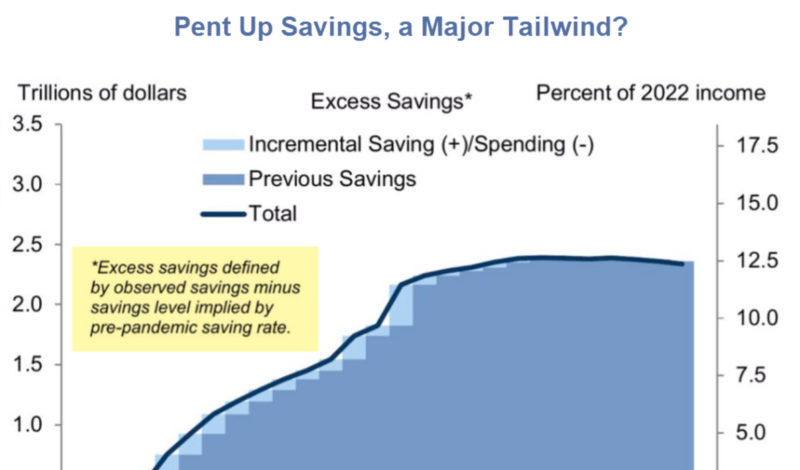 Is there a big pool of unspent fiscal stimulus money that will support consumption going forward?

“Not sure most investors appreciate how much it will take to eat through the excess savings & healthy balance sheets that the pandemic created for households as a whole. Because people don’t understand flows and balances. The excess savings is a balance. The savings rate a flow,” says Wasteland Capital.

In Austrian economics “excess savings” is impossible. It implies no one would consume, thus we would all starve to death.

The Austrians are correct, but let’s discuss an alternate definition as provided.

“Excess savings = the cumulative savings above the pre-pandemic amount.”

How Much Free Money Stimulus Still Hasn’t Been Spent?

Without using the term “excess savings” I took a stab at the above definition on April 22 in How Much Free Money Stimulus Still Hasn’t Been Spent?

The above chart is two month old, so let’s do an update, this time looking at real (inflation adjusted income and spending.

Don’t be so sure.

Free money that goes to bottom rung households tends to immediately get spent. The higher the rung, the longer the savings remain unspent. This is complicated by the fact that most of the money was supposed to go to lower tiers, and further complicated by corporate fraud, especially in round one.

The notion that there is a big pool of accumulated savings ready to spend for months into the future is very questionable.

I have a sneaking suspicion that much of the allegedly unspent money went to crypto heaven or the stock market.

Point of clarification: The money did not go to money heaven, someone still holds every dollar.

Q: What is “saving”?
A: Production Minus Consumption

We handed out free money with nothing being produced then we wonder why we have inflation!

On May 17, I noted Retail Sales Easily Beat Expectations, US Treasury Yields Jump in Response

However, the next day I noted Target Plunges 25%, What About Yesterday’s Big Retail Sales Blowout?

Reports by Target and Walmart strongly suggest something other than pent-up saving.

Amazon is laying off workers.

Consumers are in such great financial shape they went on a credit card binge instead of spending alleged savings.

If there is a “tailwind” of savings, which I rather doubt, it will be consumed in a flash in the coming recession.

That triggered a silly discussion on Twitter noting this month is the end of the second quarter. Yes, that’s true but most key data is still from April.

Jobs are a very lagging indicator. They rose in the first quarter of the Great Recession and in many preceding months.

The key number is retail sales. The most recent data is April. It was way stronger than expected. But is it believable?