A Drone Flew A Human Lung Across Toronto For Emergency Transplant 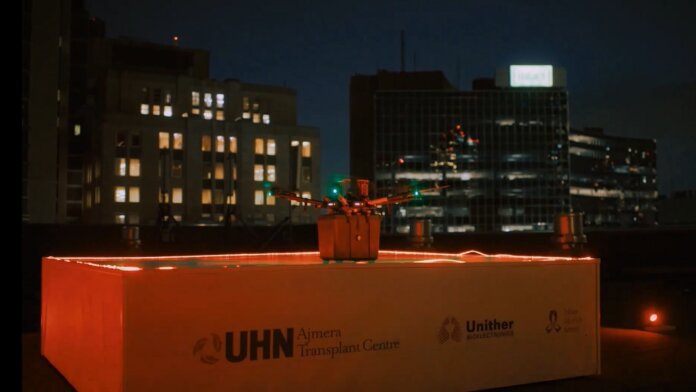 Big companies like Amazon and Walmart have recently been testing drone delivery, flying customers’ orders to them through traffic-less skies. Given the volume of packages now circulating through the mail system every day (and the Amazon delivery vehicles constantly clogging up urban streets), it’s important that companies find better ways to get goods to buyers. But while ferrying paper towels or shampoo (or the innumerable other items people buy online) into buyers’ waiting hands via drone is convenient (and, let’s be honest, pretty cool), the speed and urgency of the airborne technology is somewhat lost on these mundane tasks.

This article was written by Vanessa Bates Ramirez and originally published by Singularity Hub.

There are other uses for delivery drones that can truly make a difference between life and death. As a paper in Science Robotics explains, transporting human organs is at the top of that list.

Last year, a team of Canadian researchers transported a donor lung via remote-piloted drone in downtown Toronto. The flight happened in September of 2021, but their paper was just published today (peer review can be a slow process). The lung went from Toronto Western Hospital to Toronto General Hospital; the two facilities are just under two kilometers (1.24 miles) apart. That’s not far, but as you know if you’ve ever tried to hurriedly drive through a dense city center—especially at busy times of day like rush hour—driving a short distance can take longer than walking. There are buses, pedestrians, delivery vehicles, cyclists, and other frustrated drivers to contend with.

Even an emergency vehicle with sirens blaring may not cover a short distance fast enough; when it comes to transplanting an organ, time is of the essence. “The moment an organ is removed from the human body, it begins to rapidly deteriorate,” the authors wrote. “Failure to deliver and transplant an organ in a timely manner can result in a missed opportunity to save a life.”

The drone they used was an M600 Pro, made by a Chinese company called DJI (this model is no longer in production). The team modified it to remove its original landing gear and payload rack so that the team could install a specially-designed lung transport box. They also modified the drone’s electronic systems for better connectivity to make sure it wouldn’t get thrown off track by interfering signals, and added safety features like a parachute recovery system, cameras, lights, and GPS trackers. Including the lung transport box and the lungs themselves, the drone was designed to weigh a maximum of 25 kg (55 pounds).

Flight time to go from one hospital to the other was about five minutes. Upon arrival, the lung was transplanted into a 63-year-old patient with idiopathic pulmonary fibrosis (a chronic condition where the lungs become scarred and it’s hard to breathe). The patient survived the transplant and recovered normally. Though everything went smoothly, this wasn’t left to chance; the team performed more than 400 test flights of the route starting in 2019.

It’s not the first time drones are used to transport organs or other crucial medical supplies, though. Donor kidneys were flown across Baltimore via drone in 2019 and over the Las Vegas desert in 2020. Various organs were recently moved between Texas and Oklahoma in an unmanned Cessna (though these were donated for research rather than being implanted in recipients). Matternet is using drones to deliver diagnostic samples in Switzerland, and in the UK a 165-mile drone superhighway is being built, and Britain’s National Health Service is trialing drone delivery for medication.

The researchers from the Toronto flight believe their trial is just the beginning of a method that will become commonplace. Regulations and infrastructure aren’t where they need to be yet, so it could be a while, but there have been enough successful proofs of concept by now that we know drone transport is a viable option. “Even for short trips between nearby hospitals, drones offer a reliable transportation method that overcomes typical city congestion,” the authors wrote. “Thus, it is likely that all donor organs will be delivered by drone in the future, irrespective of distance from the transplant hospital.”