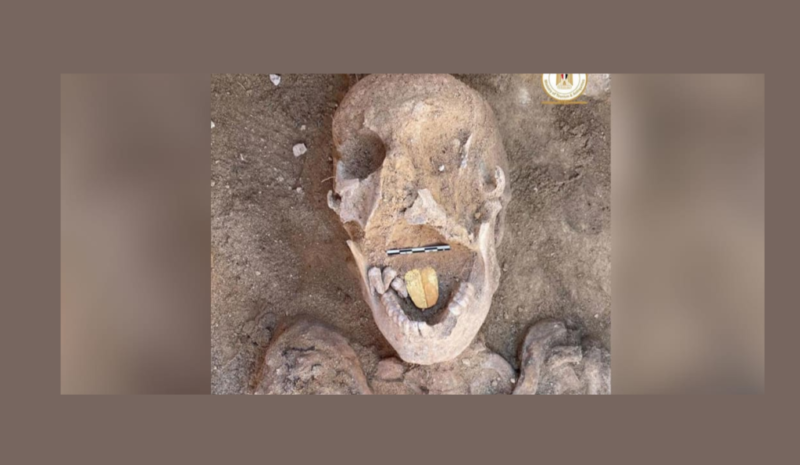 Over the years, I’ve done a number of Fun on Friday posts about eating gold. You can have gold on your steak, on your desert, and even in your beer. Well, apparently some ancient Egyptians wanted the taste of gold in their mouths for all eternity. Archaeologists recently discovered a 2,000-year-old mummy with a gold tongue at an ancient Egyptian site called Taposiris Magna.

This article was written and published by Peter Schiff of Schiff Gold.com.

And yes – it looks as creepy as you might imagine.

But I should be clear – it wasn’t an actual tongue. It was gold foil shaped like a tongue and placed in the mouth.

So, why would the living leave a golden tongue with the dead? Archeologists speculate that it was to enable the deceased to speak in the afterlife.

I’ve heard of a “silver-tongued devil.” Maybe this mummy is a golden-tongued angel?

Now, if talking in the afterlife is actually a thing, I think we should probably be careful who gets the golden tongues. Because there are some people that have used up their allotment of words in their current life. We don’t need them to say another word in the afterlife. I’m thinking primarily of politicians and Federal Reserve presidents here. Fed people definitely don’t get gold tounges. We’ll wrap theirs in fiat currency. It won’t last and they won’t be able to say a thing about it.

According to a statement by the Egyptian Antiquities Ministry, if the golden-tongued mummy encountered Osiris, the god of the underworld, it would need to be able to speak to him.

That raises a question: what would you say to the god of the underworld? I suppose that would depend on the nature of the god, right? I don’t know much about Egyptian religion so I looked up Osiris and found “although he is usually seen as a just, generous, and giving god of life and abundance there are also depictions of him as ‘a terrifying figure who dispatches demon-messengers to drag the living into the gloomy realm of the dead.’”

That second part is yikes. I suppose you would need a golden tongue to beg for mercy! But if Osiris is indeed kind and generous, maybe you could use that golden tongue to sweet-talk him into giving you something — although I’m not sure what a dead person with a gold tongue really needs.

The archaeological team found a number of mummies during the dig, but apparently, this dude was the only one who got a golden tongue. There was some speculation that maybe he had a speech impediment when he was alive.

The article noted that it’s unclear why they used gold for the tongue. That’s easy. It’s gold. It doesn’t rust or decay. Even the Egyptians knew that gold would maintain its value over time. I mean, you wouldn’t want to use something that was just going to rot away. You never know when you might run into Osiris and his crew!

Fun on Friday is a weekly SchiffGold feature. We dig up some of the off-the-wall and off-beat stories relating to precious metals and share them with you – with tongue firmly planted in cheek. Click here to read other posts in this series.