A Living Greenland Shark As Old As America 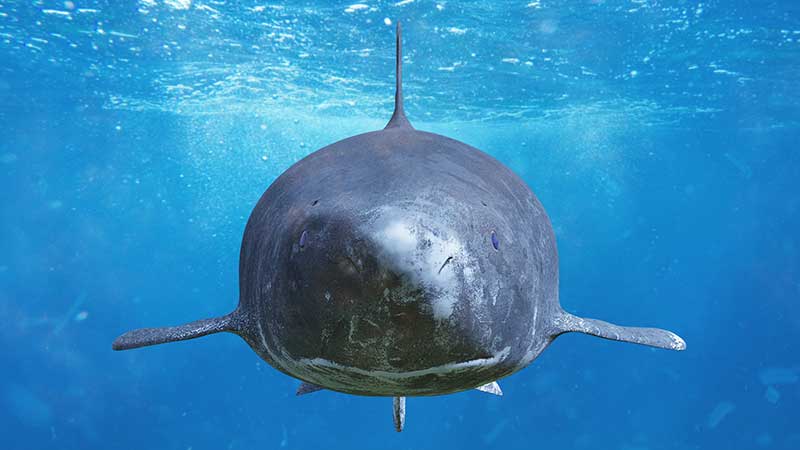 One of the most fascinating aspects of nature is that so much of it is ancient compared to humans’ lifespans. Some giant Sequoias are known to have been standing for thousands of years. But when it comes to living vertebrates, none have been known to live longer than the Greenland shark.

Until recently, the oldest known living vertebrate was the Bowhead whale, native to Arctic waters. One specific specimen was estimated to be 211 years old. But a scientific study of Greenland sharks in 2016 revealed one particular shark, tagged off the coast of Greenland, to be around 392 years old. A living shark whose birth likely coincided with the Mayflower arriving in America. Imagine that. To put it in perspective, when the pilgrims first settled in the New World, this shark was roaming the north Atlantic waters. This particular shark, alive today, essentially bore witness to almost all of American history.

Scientists use lines formed in bones over time, much like rings in trees, to determine the age of most vertebrates. But because Greenland sharks are cartilaginous, meaning they have soft cartilage instead of bone structures, determining their age requires applying another method called radiocarbon dating. Forensic scientists have long been able to carbon-date the proteins inside the eye lens of humans to determine their age. Lens proteins are unique, in that they do not degenerate. Once they are formed during the prenatal stage, they retain their original profile throughout the person’s lifetime. By carbon-dating these proteins, scientists can determine the age of the person.

Much like the human eye lens, the Greenland shark’s lens contains carbon-14, a slightly radioactive form of carbon that exists in all living things. Interestingly enough, thermonuclear bomb tests that became prevalent in the 1950s deposited radiocarbon in the marine environment, which resulted in higher levels of radiation inside the lens of all marine life, including Greenland sharks. This spike in radioactive levels is referred to as the “bomb pulse.” So, in 2016, marine biologists capitalized on the bomb pulse and tested the radiation found in 28 Greenland sharks that were tagged and surveyed between 2010 and 2013.

The results were astonishing. Only the smallest, thus youngest sharks, showed residuals of the bomb pulse inside their lens. This dates them to the early 60s, roughly 60 years old. Radiocarbon dating of the larger, pre-bomb sharks suggested they reached sexual maturity at around 156 years, with a lifespan of at least 272 years. This study also unveiled the oldest known living vertebrate, a 16-foot female Greenland shark, estimated to be approximately 392 years old. How amazing is that? Here is a fish that was alive throughout most of American history, from the pilgrims to the Civil War, the industrial revolution to the technological revolution, and everything in between. That is quite the life.

The idea of living for 400 years seems superfluous. If asked, most people will likely be content with 80. In contrast, the Greenland shark has yet to reach sexual maturity at the century mark, with the prime of its life still ahead. At 100, it has so much yet to see and do, and so much of human history to behold. These gentle giants may hold the secret to longevity. But for now, we can only take a pause in time and appreciate them for the biological wisdom they bear.