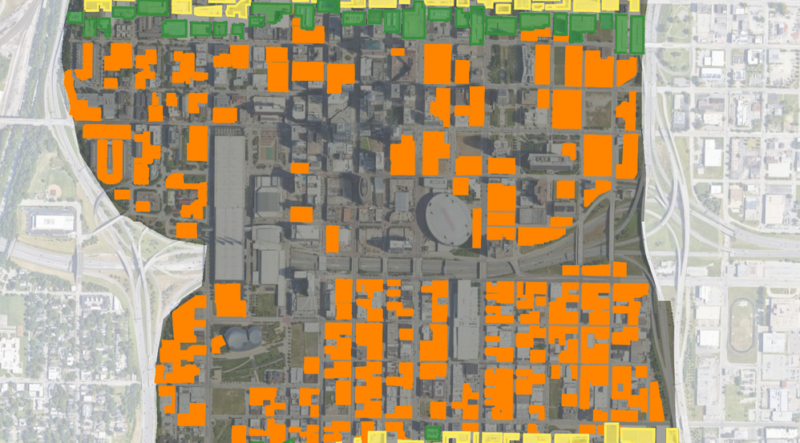 This is a simple graphic of Kansas City, Missouri, in which Clarkin has illustrated all of the available parking within the downtown loop—his point being to highlight the blight that came with the downtown loop since its construction 50 years ago.

This article was written by Edward Erfurt and originally published by Strong Towns.

This graphic is intended to illustrate what is hiding in plain sight: a whole lot of parking. The image is shocking and illustrates the amount of excess, wasteful parking within the downtown loop. Kansas City is simply an example here, and Kansas City is not alone with this problem—I assure you it’s not the only city encircled by an interstate highway, nor is it the most parked city in the county. And, it’s not the only city with ample opportunity to redevelop its downtown.

The Kansas City loop is a massive top-down project that was planned and built without any of the usual constraints of funding or property ownership—both cast aside in the name of progress and efficiency—resulting in a city being completely reshaped. What would it look like if this experiment was allowed to continue or used as a method of construction to build a new city?

For the sake of argument, I want to explore if a plan could be developed using the same unconstrained planning approach that has been utilized by the Federal Highway Administration (FHWA). The new master planner for this project would use all the tools of the FHWA, such as urban renewal to fight blight and encourage economic development. Less desirable uses of land, like surface parking lots, could be relocated and more productive uses could be proposed with the purpose of maximizing redevelopment potential and increasing overall efficiency. The plan would have very little environmental impact, and therefore would be exempt from environmental constraints, because all of the redevelopment would occur within the existing disturbed areas of downtown. The plan would likewise have no fiscal constraints, thanks to access to bonds and grants, and because of the promised projection of increased development. All of these tools would work together through a completely unconstrained plan to transform the downtown.

The original graphic highlights the surface parking in yellow and the structured parking in green. Through these illustrations I continue to use this color key, with one addition to represent new development.

The first recommendation in the plan is to consolidate all the surface parking lots, which are keyed in yellow. All of the existing parking lots should be moved against Interstate 35/70 and the railroad, providing easy access for visitors as they exit the interstate or if they are boarding a train. In this diagram, I just slid the parking lots in the same orientation to the edges of downtown. At the edges are the interstate and the railroad, which are the least desirable neighbors for new development, so all existing development can continue to be razed and rebuilt in more productive areas of downtown.

With these two recommendations of consolidating and organizing the parking, almost 60% of the downtown (indicated in orange) is freed for new development and investment. The plan provides plenty of opportunity to support the region’s growth for many years to come, which leads to the next recommendation.

The third recommendation is to fill in all the downtown spaces that have been liberated from parking with development. The result will be a compact, walkable development pattern at the center of the city. This also allows the downtown to expand and straddle Interstate 670, inspiring more investment and development.

The fourth and final recommendation is to improve Interstate 670 by capping the freeway and constructing a grand urban boulevard above it. This enhancement to the interstate is partially completed with the Kansas City Convention Center being the first two blocks. This cap will fill in the new center of downtown with a vibrant mix of land uses and prominent public open spaces.

At Strong Towns, we like to use examples like this to illustrate a problem in a different way. This fictitious master plan that promises to attract private investment and redevelopment is based on all the false promises and assumptions presented 50 years ago to justify the urban renewal policies used to construct the loop. Still today, and after seeing the built results of these projects, planners adopt these policies believing that they will yield a different result. As with the original highway plans of the Kansas City Loop, the plans were developed without fiscal constraint, which has resulted in the displacement of people and buildings. The promises of prosperity in these projects have never emerged, but the damage is evident.

I have great hope and an optimistic outlook for the future of Kansas City. Each of these surface parking lots is an opportunity site for bottom-up redevelopment that can adapt and react to the needs of the citizens of Kansas City. This type of redevelopment will not come from the top. Instead, gradual and sustainable redevelopment and investment will emerge through the power of hundreds of little bets, where citizens take small steps to improve their community and lives.