A Regional Breakdown Of Millennials Around The World 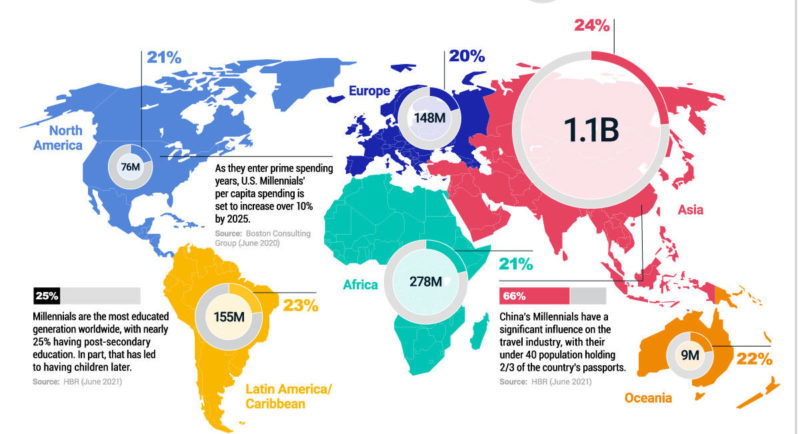 A Regional Breakdown of Millennials Around the World

Eventually, Baby Boomers will cease to be the most influential generation.

Of course, it’s bound to happen. But this means that the social, political, and economic terrain will be reshaped for the next several decades.

This article was written by MSCI and originally published by Visual Capitalist.

Millennials, defined as those born between 1980 and 1994 (age 27-41 in 2021), are now the largest adult cohort worldwide. They are also the most educated. The big question is, how will this generation influence society?

As millennials get older and gain more earning power, this graphic from MSCI shows the regional breakdown of millennials around the world, and the second-order effects of their rising influence.

Millennials Around the World

Today, there are 1.8 billion millennials around the world, equal to 23% of the global population. Here’s how millennials break down by region:

*Totals may not add up due to rounding. Source: Analysis based on the 2019 Revision of World Population Prospects, United Nations (2019)

Asia is unmatched when it comes to millennials. Across the region, there are 1.1 billion millennials, or 24% of the region’s population. In China for example, those under 40 own two-thirds of the country’s passports. Millennials and Gen Z are projected to make up 75% of the Association of Southeast Asian Nations (ASEAN) consumers by 2030.

The region of Africa has the second-highest millennial cohort, at 278 million. Millennials control 65% of Africa’s purchasing power through household purchases, valued at $845 billion.

In North America, millennials are projected to see a 10% increase in spending by 2025. But while previous generations began having children at this age, fewer millennials are becoming parents. One in three U.S. millennials live with their spouse and a child, compared to 40% for Gen X.

Educational levels and job security are two factors that can help explain this trend. In one survey, over 50% of U.S. millennials were concerned about employment prospects in the future.

Most Educated Generation, Ever

The millennial generation is the most educated in history. What’s more, educational levels of women outpace men across nearly all regions for the first time. This pattern suggests that women could play a more concrete role in everything from politics, grassroots movements, business, and public discourse as evidenced by historical trends.

However, progress is still slow: just 12 of 532 voting members of congress are women millennials.

Demographic forces have a powerful effect on society.

One prime example is the shifting dialogue in financial markets. Investors are placing a greater focus on sustainable practices, with alternative energy innovations and solutions gaining serious traction. At the same time, 40% of new investors in 2020 were aged 30-44.

As social dialogue changes, so do investing choices. This presents a critical opportunity for businesses and asset managers, who may consider adapting as demographics change.