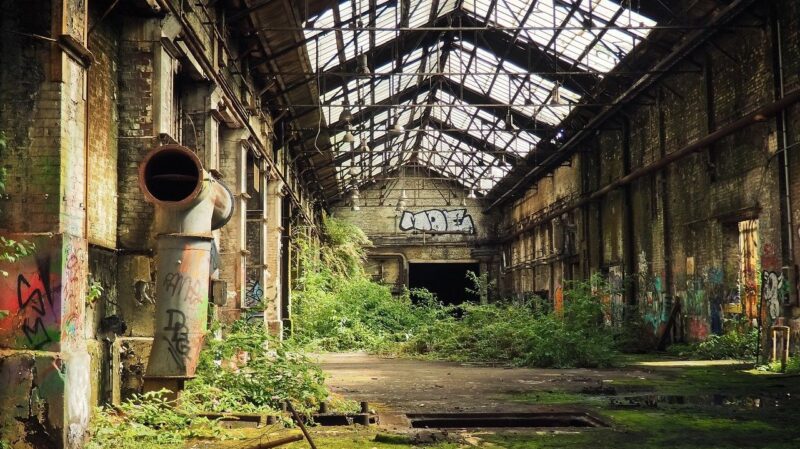 Labor market productivity has been dropping for decades. And you can trace the plunge back to the demise of the gold standard.

US labor market productivity plummeted in the third quarter of 2021. Revisions to the data showed a 5.2% drop in productivity, even worse than the dismal initial reading last month. It was the worst productivity decline since 1960.

This article was written by Michael Maharrey and originally published by Schiff Gold.

Labor productivity is calculated by dividing an index of real output by an index of hours worked by all persons, including employees, proprietors, and unpaid family workers.

Even with the steep Q3 decline, productivity is expected to chart a small increase of 1.7% this year. One economist told CNN that would be a “solid gain.” But historically speaking it’s not a solid gain at all.

Economic writer Brian Maher wrote, as with many systemic problems in the economy, you can trace the decline in productivity to the end of the gold standard.

In 1971, President Richard Nixon slammed shut the gold window and eliminated the last vestige of the gold standard. Nixon ordered Treasury Secretary John Connally to uncouple gold from its fixed $35 price and suspended the ability of foreign banks to directly exchange dollars for gold.

Nixon’s order was the end of a path off the gold standard that started during President Franklin D. Roosevelt’s administration. June 5, 1933, marked the beginning of a slow death of the dollar when Congress enacted a joint resolution erasing the right of creditors in the United States to demand payment in gold. The move was the culmination of other actions taken by Roosevelt that year. By the time Nixon got around to issuing his order, the gold standard was a shadow of its former self. But Maher explains, even this “sad caricature” of the gold standard imposed some discipline on the economy.

A wastrel nation that consumed more than it produced would eventually run through its gold stocks. The fiat dollar, the unbacked dollar, lifted the penalty. It could take things in without sending gold out. A liberated Federal Reserve finally struck its golden shackles… spread its nets… and ensnared the nation in debt.”

In 1970, the US national debt stood at $371 billion. That translates to about $2.6 trillion in today’s inflation-adjusted dollars. Since then, the national debt has ballooned to nearly $29 trillion.

Michael Lebowitz of Real Investment Advice said a pure fiat money system enabled this massive growth of debt and put a spike through the heart of productivity.

The stagnation of productivity growth started in the early 1970s. To be precise it was the result, in part, of the removal of the gold standard and the resulting freedom the Fed was granted to foster more debt… over the last 30 years the economy has relied more upon debt growth and less on productivity to generate economic activity.”

After all, running up debt is easy. Productivity requires work, time and sacrifice.

As Maher put it, “the emerging American economy abandoned the grimy toil of the factory floor and the workbench…. and struck out for Wall Street. It went chasing after the fast buck — the easy buck. The financialization of the American economy was underway.”

The finance industry contributed about 10% to GDP in 1970. But by 2010, it grew to over 20% of GDP. According to Maher, “as weeds choke a flowering garden, finance choked the flowering of labor…”

This led to an addiction to debt. Maher says a financialized economy demands perpetually expanding credit to keep the economy growing.

Servicing that debt absorbs increasing amounts of society’s income. That, in turn, leaves less to save… and to invest in productive assets. Speculation goes amok.”

Economists Gerald Epstein and Juan Antonio Montecino estimate the financial sector has drained trillions from the US economy since 1990.

What has this flawed financial system cost the U.S. economy?… We estimate these costs by analyzing three components: (1) rents, or excess profits; (2) misallocation costs, or the price of diverting resources away from non-financial activities; and (3) crisis costs, meaning the cost of the 2008 financial crisis. Adding these together, we estimate that the financial system will impose an excess cost of as much as $22.7 trillion between 1990 and 2023, making finance in its current form a net drag on the American economy.”

Epstein and Montecino are zeroing in on the misallocations and maladjustments in the economy caused by the Federal Reserve as it keeps interest rates artificially low and runs quantitative easing schemes in order to maintain the debt pyramid.

Sound money would temper this cycle, but the US abandoned sound money long ago.

And we’ve been paying for it ever since.