Alex Caruso Will Get His Minutes 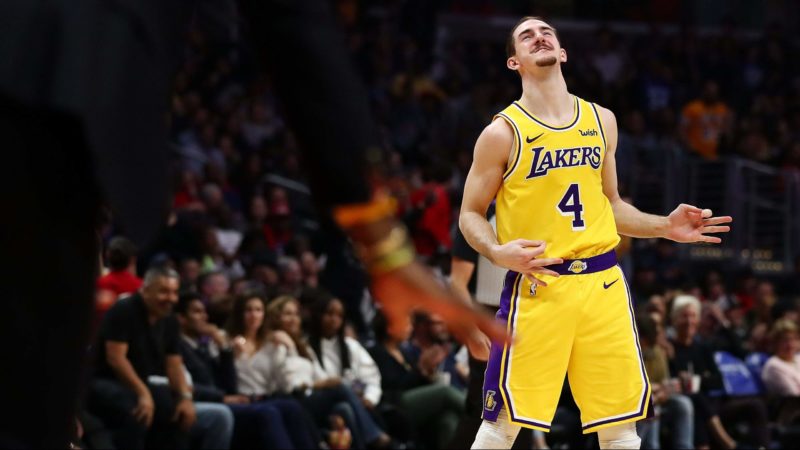 As the Lakers are 15-6 through 21 games of the season, it’s going to be hard to find something for Lakers fans to get pissed about. Gone are the days of the early-to-mid 2010s where you could find (at least) five things to get furious about at all times, now what do Lakers fans get mad about?

The minutes of an undrafted, balding bench player in the second month of the regular season.

This article was written by Donny McHenry of Lakers Outsiders.

Yes, that’s right. Alex Caruso isn’t getting enough minutes in everyone’s eyes, drawing the ire of some Lakers fans towards Frank Vogel as they wonder why he isn’t getting more playing time especially in some games where his defensive prowess was needed at times. I’m here to tell everyone that we all need to RELAX!

For starters, I thought we decided the early part of this regular season didn’t matter after, you know, that championship we won. Second, some may scoff at the idea of load managing a 26-year old off the bench, but this is an example of the luxuries afforded to the Lakers and Vogel while having a core that has proven itself good enough to win a championship. Also, it may not be as evident considering how well the Lakers’ staff handles it, but Caruso has always been the victim of some nagging injuries here and there. He’s missed a few games in stretches because of it, with those stretches possibly being precautionary in nature to keep him from missing large chunks of games.

Caruso’s lack of minutes may also be overstated in general by Lakers fans. In the above chart, I’ve mapped out Caruso’s minutes in the past 10 games this season, with the same stretch of games in the previous regular season. In the yellow line, you’ll see his minutes in the final 10 playoff games. You can see the playoffs include the highest and most consistent stretch of minutes, with the 2019-20 games going higher at times than the stretch of minutes this year. However, I see much less variation in his minutes this year, giving credit to the idea that Vogel now knows what he has with Caruso, knowing he doesn’t have to test him out in certain lineups to see what he had like he did last season when he had only known Caruso for probably 2 months.

You can also see from the chart that the most outspoken Lakers fans about this “issue” probably don’t realize that Caruso really wasn’t averaging much more minutes last regular season, or even in the 2020 Playoffs where he continued to prove how valuable he is on the way to a championship. It seems that fans and critics of Frank Vogel are expecting him to possibly keep Caruso out of his normal amount of playoff minutes in lieu of Wesley Matthews or others. We received evidence on Saturday that this probably won’t happen, as Vogel shortened his rotations to ensure the Lakers came out with a win against the Celtics, with Caruso receiving 19 minutes (compared to his minutes-per-game average on the season of 17.9). More importantly than the total of minutes, he received playing time while Matthews and Markieff Morris were held out of the game entirely.

To give credit to these criticisms, Alex Caruso definitely is continuing his ways of positively affecting every aspect of the Lakers’ game while he’s on the court. He has the highest Net Rating of any individual on the team who plays substantial minutes (at 17.5 compared to LeBron James’ 11.2) and has the best Net Rating of any 2-man combination with LeBron James (21.8 with the Gasol/LeBron combination in second-place at 16.2). His amazing defensive instincts are still there (96.8 Defensive Rating is a large part of his overall Net Rating and leads the team) while he has apparently been working on his three-pointer between the end of last season and the beginning of this season. He’s averaging a tantalizing (and probably not long-lasting) 52.8% through 21 games on 2.3 attempts per game (both the percentage and attempts would be career-highs).

Let’s all stop worrying about Alex Caruso. We surely don’t need to worry about him being productive, and I think the Celtics game is enough evidence (in addition to everything else) that Vogel will give him his due when it comes playoff time.