All The Contents Of The Universe, In One Graphic 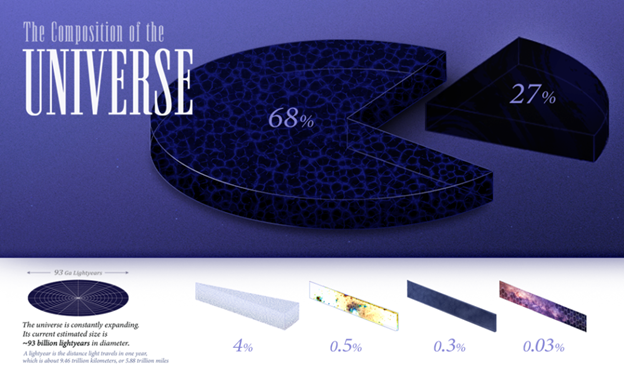 This article was written by Mark Belan and originally published by Visual Capitalist.

These last two are theoretical because they have yet to be directly measured—but even without a full understanding of these mysterious pieces to the puzzle, scientists can infer that the universe’s composition can be broken down as follows:

Dark energy is the theoretical substance that counteracts gravity and causes the rapid expansion of the universe. It is the largest part of the universe’s composition, permeating every corner of the cosmos and dictating how it behaves and how it will eventually end.

Dark matter, on the other hand, has a restrictive force that works closely alongside gravity. It is a sort of “cosmic cement” responsible for holding the universe together. Despite avoiding direct measurement and remaining a mystery, scientists believe it makes up the second largest component of the universe.

Free hydrogen and helium are elements that are free-floating in space. Despite being the lightest and most abundant elements in the universe, they make up roughly 4% of its total composition.

All other hydrogen and helium particles that are not free-floating in space exist in stars.

Stars are one of the most populous things we can see when we look up at the night sky, but they make up less than one percent—roughly 0.5%—of the cosmos.

Neutrinos are subatomic particles that are similar to electrons, but they are nearly weightless and carry no electrical charge. Although they erupt out of every nuclear reaction, they account for roughly 0.3% of the universe.

Heavy elements are all other elements aside from hydrogen and helium.

Elements form in a process called nucleosynthesis, which takes places within stars throughout their lifetimes and during their explosive deaths. Almost everything we see in our material universe is made up of these heavy elements, yet they make up the smallest portion of the universe: a measly 0.03%.

How Do We Measure the Universe?

In 2009, the European Space Agency (ESA) launched a space observatory called Planck to study the properties of the universe as a whole.

Its main task was to measure the afterglow of the explosive Big Bang that originated the universe 13.8 billion years ago. This afterglow is a special type of radiation called cosmic microwave background radiation (CMBR).

Temperature can tell scientists much about what exists in outer space. When investigating the “microwave sky”, researchers look for fluctuations (called anisotropy) in the temperature of CMBR. Instruments like Planck help reveal the extent of irregularities in CMBR’s temperature, and inform us of different components that make up the universe.

You can see below how the clarity of CMBR changes over time with multiple space missions and more sophisticated instrumentation. What Else is Out There?

Scientists are still working to understand the properties that make up dark energy and dark matter.

NASA is currently planning a 2027 launch of the Nancy Grace Roman Space Telescope, an infrared telescope that will hopefully help us in measuring the effects of dark energy and dark matter for the first time.

As for what’s beyond the universe? Scientists aren’t sure.

There are hypotheses that there may be a larger “super universe” that contains us, or we may be a part of one “island” universe set apart from other island multiverses. Unfortunately we aren’t able to measure anything that far yet. Unravelling the mysteries of the deep cosmos, at least for now, remains a local endeavor.