Apple Is Turning A Car’s Dashboard Into An iPhone 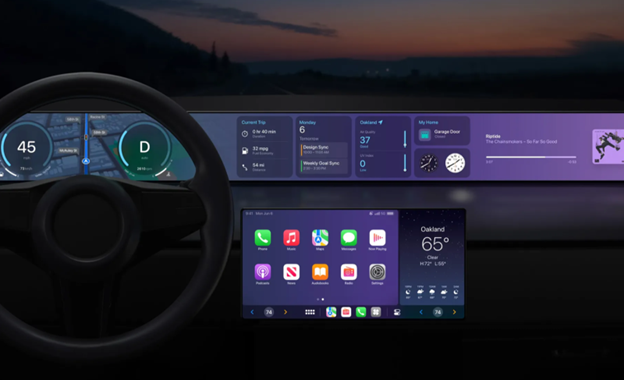 Siri, can you distract me more?

Apple’s attempt to deter drivers from using handheld cell phones by having an entire dashboard mirror their iPhone’s display is prompting a conversation about why regulators aren’t taking action on “infotainment” systems that induce the very dangerous driving that manufacturers claim the tech will help prevent.

This article was written by Kea Wilson and originally published by Streets Blog USA.

As part of its annual Worldwide Developer Conference on Monday, Apple previewed an update to its controversial “CarPlay” function that will essentially broadcast much of a motorists’ iPhone onto the car’s cockpit, in addition to the center entertainment touch screen already on many cars.

The feature will display a range of iPhone widgets directly alongside the speedometer and other traditional dashboard instruments, all in one integrated operating system that drivers can customize for maximum distraction. Calendar notifications, turn-by-turn directions, Apple Music, real-time information about the weather, local UV indexes, and an array of other apps will surround drivers at all times, constantly tempting them to take their eyes off the road to read backlit blurbs of text rather than using CarPlay’s less-convenient speech-to-text functions.

Apple also added that eventually, CarPlay’s visual features may even be projected onto the windshield itself via the car’s “heads up” display, possibly distracting motorists even more.

Apple is marketing the new interface as a safety feature that can prevent drivers from using handheld phones behind the wheel, but advocates were quick to point out that earlier versions of CarPlay have already shown to slow motorists’ reaction times by around 57 percent compared to when they’re giving their undivided attention to the road.

That’s about five times slower than driving at the legal drinking limit, three times more than driving under the influence of cannabis, and — ironically — it’s even slower than texting with a handheld phone, one of the very dangerous behaviors that CarPlay was ostensibly designed to prevent. The study authors weren’t sure why that was, but researcher Neil Greig speculated that it could come “down to drivers assuming it is safer because it is built-in, the larger screen, or the extra number of features.”

Experts say a motorist glancing away from the right of way for more than two seconds roughly doubles the chance of a car crash even in slow-speed road environments — and sophisticated touch screens, unlike easy-to-memorize buttons on a traditional console radio, pretty much can’t be controlled without glancing down for longer than that. On simulator tests, the original CarPlay was found to draw the eye away from the road for as much as 16 seconds without drivers even realizing it.

And again, that was before the feature was updated to more or less transform the entire vehicle into an IMAX theater.

U.S. safety watchdogs like National Transportation Safety Board’s Jennifer Homendy have publicly called for regulators to test the safety impacts of infotainment systems, or at the very least prohibit automakers and tech companies from bragging about their safety “benefits” in marketing campaigns. But the National Highway Traffic Safety Administration has so far only advised automakers to avoid the most egregiously dangerous designs — and in the meantime, features like CarPlay are transforming into ever-more-distracting luxury features.

“Essentially, regulators have been running behind as automakers and tech companies are charging ahead,” said Paris Marx, author of the forthcoming, Road to Nowhere: What Silicon Valley Gets Wrong About the Future of Transportation. “Now, [NHTSA and the tech regulators] are waking up to these problems, but they’ve been quite slow. … And that inaction has had consequences already.”

Marx says the popularity of infotainment systems is symptomatic of America’s larger tendency to look to technology to solve urgent transportation problems, without stopping to confirm that it actually works first.

“Whether AVs’ potential to end car crashes, or ride hail to end traffic jams, or infotainment systems to end distracted driving, technology companies have made a lot of big promises, but they haven’t been able to follow through,” they added. “That’s because we’ve ignored the real, structural problems of orienting our transportation system around the automobile.”

To actually end distracted driving, Marx says we may need to reduce app-based solutions, and focus on older technologies that are proven to save lives — like the bicycle, the bus, and roads designed for safety.

“If we’re thinking about what’s really going to make transportation better, it’s not going to be about putting more services at our fingertips when we’re driving around,” they said. “It’s about tackling those political, thorny issues that started these problems in the first place. It’s about looking at the car itself, and asking ourselves whether car dependency is good for us. And then, it’s about investing in alternatives, like transit, cycling, and even e-bikes — rather than hoping that Elon Musk, Uber, or Apple will save us.”