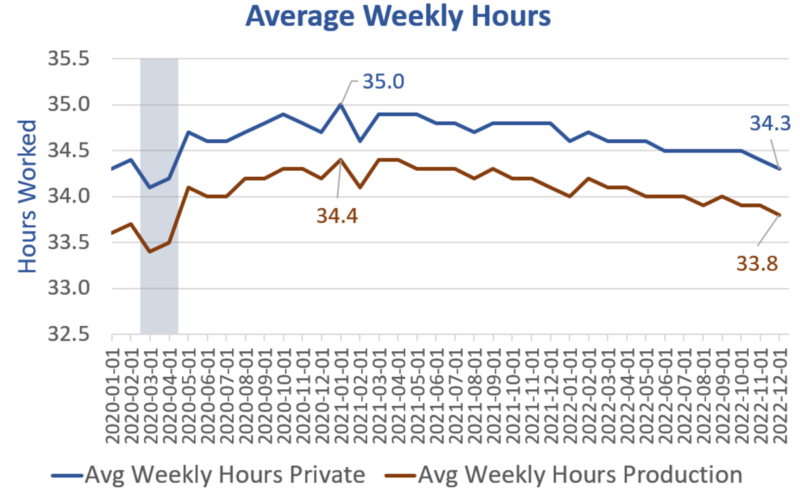 The blue line is the average hours worked for all private workers. The red line is average weekly hours of production and nonsupervisory workers.

Both of the above series come from the establishment survey.

Although the average work week is has declined steeply, total hours worked has been rising until recently. The numbers are all seasonally adjusted so we can can compare months.

I have not studied this data to know how noisy it is. Also, there could be significant rounding errors. However, all the charts and my calculations are in sync.

The indexes of aggregate hours appear to be rolling over and my calculation suggests the same.

Meanwhile, assuming you have faith in these payroll numbers the numbers of jobs keeps rising.

December Jobs: Employment Rises by 717,000 All of Them Part Time

For discussion of the latest jobs report, please see December Jobs: Employment Rises by 717,000 All of Them Part Time

Nonfarm jobs rose by 223,000 and employment jumped but huge divergences continue for the 9th month.

Payrolls vs Employment Since March 2022

Declining hours from the establishment survey fits in nicely with trends in the employment levels.

I strongly believe we will see major revisions to the downside in some of this data. It happens at every economic turn.