Big Band Living In The Valley 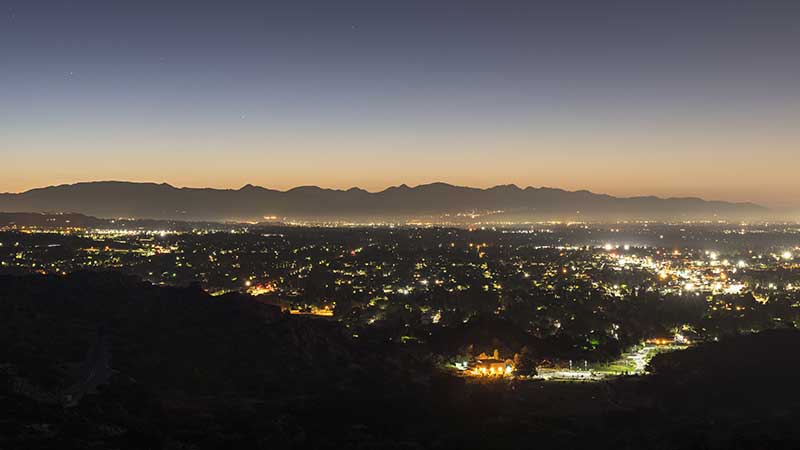 Show Business has played an undeniable role in shaping the landscape of the San Fernando Valley. Over the years, The Valley has seen countless celebrity-owned eateries, an airport named for comedian Bob Hope, and an entire neighborhood named after the fictional king of the jungle Tarzan. One of the “ unsung” heroes of Valley celebrity land development is bandleader Horace Heidt.

Heidt was a popular radio personality in the 1930s. He led several ensembles and bands (including one consisting of eight harmonica players) and was featured regularly on both NBC and CBS radio. His band also scored a number of Top Ten hits during this period. During the depression, Heidt and his band appeared on the Pot o’ Gold radio show, which would phone listeners at random, and give away $1000, becoming one of the earliest cash give away game shows.

Soon, Hollywood came calling to turn the Pot o’ Gold story into a feature film starring Jimmy Stewart, and Heidt and his band relocated to Southern California. Finding a space to accommodate Heidt’s entire 30-piece orchestra proved to be a challenge. Then he learned of an old horse ranch for sale in the San Fernando Valley. The property was large enough to house not only the entire band, but was also a great investment in the burgeoning real estate market.

Over the years, the property developed into a full-scale resort-style living community. Christened “Horace Heidt’s Magnolia Estate Apartments,” the development grew to 160 apartment units and twenty stand-alone bungalows. The grounds feature numerous swimming pools, tennis courts, and an eighteen-hole golf course. Much of the complex is decorated in an optimistic exotica/Polynesian theme, complete with waterfalls and tiki statues. Heidt modeled his development after the resorts of Palm Springs because he wanted to give people a relaxing place to come home to after a hard day’s work.

Remarkably, the complex is much the same today as Horace Heidt originally envisioned it. Over the years, famous residents have included Dick Van Patten, Ed Bagely Sr., and Wally George. The property still hosts movie nights, a bridge club, and an annual luau. According to their website, single units start at around $1200 a month.

Though Horace Heidt is no longer a household name across the country, there are at least 300 residents whose households are named after Horace Heidt. The Horace Heidt Estates represent two of the basic tenets of life in Southern California- hard work and relaxation.

Adam Papagan is a historian, tour guide, and occasional consultant to The Valley Relics Museum. He is also host of the YouTube series “Rock and Roll Party!”