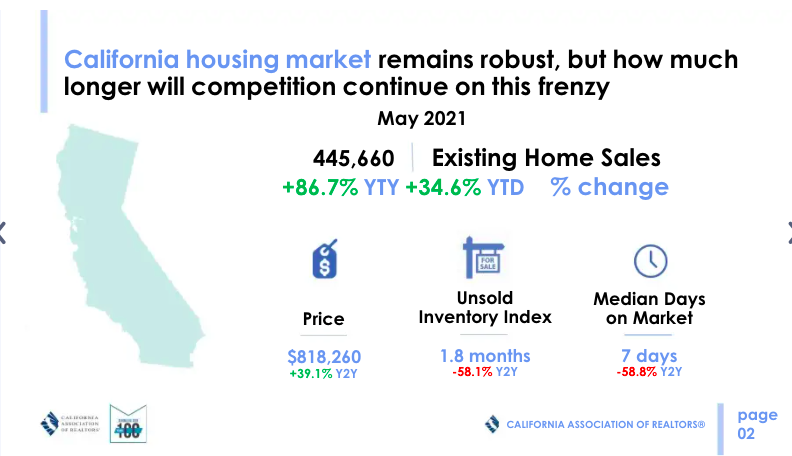 Image Courtesy Of The California Association Of Realtors

The California Association of Realtors recently announced that the median home price in the Golden State has surpassed $800,000.

This article was written by Katy Grimes and originally published by California Globe.com.

“Heated market conditions and a shortage of homes for sale continued to put upward pressure on home prices in California, driving the state’s median price above the $800,000 benchmark for the first time ever in April, as home sales soared from last year’s pandemic-level lows,” the California Association of Realtors reported.

“California’s median home price broke last month’s record and set another new record high in April as the statewide median price surged more than 34 percent from a year ago,” the CAR reported. “The statewide median home price climbed 7.2 percent on a month-to-month basis to $813,980 in April, up from March’s $758,990 and up 34.2 percent from the $606,410 recorded last April. The year-over-year price gain was the highest ever recorded, and it was the first time since June 2013 that the state recorded an annual increase of over 30 percent.”

California’s high cost of housing is largely due to state and local mandates which add more than $100,000+ to the sales price, as well as almost no affordable housing/apartments getting built – because of the cost of the mandates: environmental mitigation cost add ons, mandates for solar roofs, all-electric kitchens and HVAC systems, fire sprinklers, etc…

Then there are the mandates for CalGreen compliance at an infill site: Locate project within a 1/4-mile true walking distance of at least 4 basic services; Soil disturbance and erosion, Topsoil shall be protected or saved for reuse, Provide capability for electric vehicle charging, Roofing materials shall have a minimum 3-year aged solar reflectance and thermal emittance, Install a vegetated roof for at least 50% of the roof area for a rooftop garden, bicycle parking facilities, Building meets or exceeds the requirements of the California Building Energy Efficiency Standards… and more. It’s all outlined online at the California Department of Housing and Community Development.

Rather than removing state and local mandates from the costs of home building, politicians just keep piling on. And then they decry the housing crisis and high cost of rents and home purchases.

Realtor Magazine reports that the median existing single-family sales price rose to $319,200, registering an annual increase of 16.2%—a record high, according to records dating back to 1989.