Can ‘Buses-As-Flights’ Get Americans Out Of Cars — And Planes? 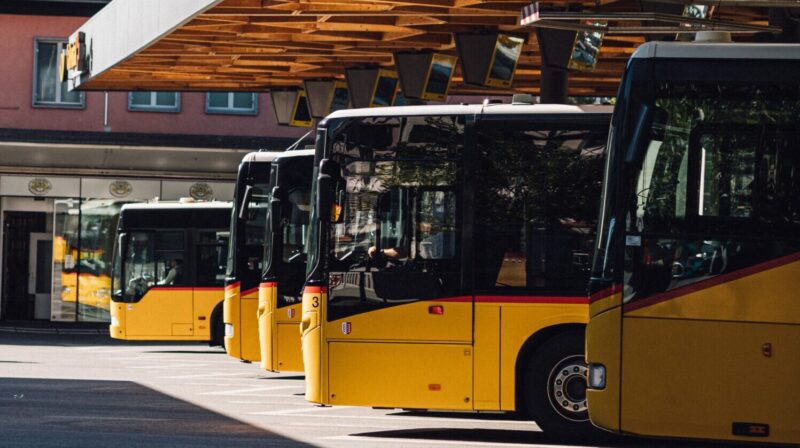 U.S. airlines are beginning to contract with bus companies to run on-the-ground “flights” between nearby cities — and advocates are suggesting that the intercity bus should no longer be ignored in the conversation about curbing car and plane dependency.

This article was Kea Wilson and originally published by USA.StreetBlog.

American Airlines sparked a curious mix of applause and outrage on Twitter last week when it was announced it would join the growing industry trend of replacing short-leg flights with “on-the-ground” alternatives — or, to be more precise, good old-fashioned buses and shuttles.

Tickets for those so-called “buses-as-flights” will be sold exactly as if they were connecting flights, through sites like Kayak and airlines’ own websites, and passengers and their luggage will be ferried directly from their homes to the airport — or, in some cases, directly from terminal to terminal — on buses branded to resemble American’s off-the-ground fleet.

Some sustainable transportation advocates praised the move as a common-sense way to axe emissions from short-haul flights and connect isolated communities with long-distance air travel that at least gets cars off the interstate. But others saw the move as an indicator of America’s under-investment in rail — or a cheap marketing gimmick aimed at bait-and-switching passengers who would never be caught dead on any shared mode, unless it happens to operate at cruising altitude.

Of course, that polarized response sort of makes sense given the strange space that intercity buses occupy in the American consciousness. Despite logging three times as many miles and more than 15 times as many unique trips as Amtrak every year — not to mention about 80 percent of the trip volume of airlines themselves — the motor coach industry is often ignored at best, and denigrated as a second-class alternative to air and private car travel at worst, sustainable transportation advocates say.

“We’re sort of like wallpaper,” said Peter Pantuso, president and CEO of the American Bus Association. “You go into a house and you may not notice it, even if you think it’s a pretty room. People don’t think about us — but when we’re not there, that’s when people pay attention.”

At least in some communities, the absence of shared intercity mobility options has certainly been felt during the latest fuel price crisis, though the intercity bus wasn’t always the first solution that came to mind. When the Russian invasion sent gas prices soaring, the International Energy Agency recommended that travelers choose high-speed rail over air whenever feasible — a great recommendation that the U.S., which has no high speed rail to speak of, couldn’t actually follow.

What the U.S. does have is a vast network of express buses, which studies show have about one-fifth of the per-passenger-mile emissions impact as air travel, based on average passenger loads for each mode.

That astonishing environmental potential, though, isn’t mirrored in U.S. transportation policy. Like airlines, the motor coach industry is operated by private companies — but unlike airlines, they are almost never subsidized by taxpayers, even when using them would keep pollutants out of the skies without sacrificing traveler comfort or convenience.

As part of the Essential Air Service program, the U.S. DOT currently helps pay for about 175 small communities throughout the country to access nearby hub airports, some of which are as little as 75 miles apart — a distance that can often be covered faster on the ground than in the air, at least when you factor in the time it can take to get through airport security or taxi on a crowded runway. A 2011 American Bus Association analysis found that just by replacing those puddle-jumper flights under 150 miles with bus trips, the U.S. could cut per-passenger emissions by a staggering 72 percent, and save about $113 million (inflation-adjusted) — but to date, we still haven’t done it.

Even during the pandemic, when airlines and Amtrak enjoyed some of the most robust public subsidies in American history, motor coach companies still struggled to access the taxpayer dollars they needed to keep routes running. The industry received about $2 billion in federal relief, split between companies like Greyhound and Megabus, as well as passenger ferry operators and the entire school bus industry, which operates the largest fleet of shared transit vehicles in the country; airlines, meanwhile, got a handout of $54 billion.

“I think its pretty inequitable,” added Pantuso. “You have to understand that [motorcoaches] are public transportation — we’re just not publicly-funded transportation. We serve a role in a lot of places where there’s no other transportation options. … And when you line up all the modes of transportation, the bus is clearly the cleanest.”

Just because a bus is better for the planet than a plane, though, doesn’t mean customers will want to ride it — even if that motor coach is faster, cheaper, and arguably more comfortable than the equivalent flight.

Landline, the company to which American and other airlines are contracting some short-haul journeys, are fighting back against negative perceptions of bus travel by providing something it says traditional motor coaches haven’t yet cracked: total integration with the airlines they serve.

“I don’t know where [bus stigma] comes from; it doesn’t make a lot of sense to me,” said David Sunde, Landline’s co-founder and CEO. “But what I can tell you is that our customer satisfaction scores, even relative to a regional jets, are really high. … As soon as that door opens, people are like, wow; how have I not traveled this way before?”

Landline isn’t the only operator that’s trying to lure customers with the promise of a top-shelf bus and shuttle experience. Motorcoach companies like the Jet — which is also branding itself like an airline, albeit without a carrier’s actual logo wrapped around the vehicle — are offering luxuries like in-seat beverage service and motion-canceling leather seats to lure Manhattan-to-DC commuters out of the airport onto the open road, all at the price of about $120 each way.

Sunde acknowledges, though, that the industry’s real challenge isn’t to get people to ditch the terminal for their medium-distance trips: it’s to get them to pick shared modes over the solo automobile.

“The longer I do this, the more it’s clear that our biggest competitor isn’t airlines: it’s people driving themselves,” he adds. “And think the more success we have, the more we’ll be taking people off the road, especially when they’re driving to the airport to park.”

Even when in-bus bottle service is on offer, tempting Americans to travel at ground level with their neighbors may be a challenge. But with the right combination of policy, amenities, and investment — and over the long term, yes: that includes investment in trains — mid-distance mass transportation could be an important tool to wean Americans off fossil fuels, at every level of the stratosphere.