Congratulations To Chicago And Las Vegas, The Only Major Cities Whose Home Prices Have Declined Since 2007 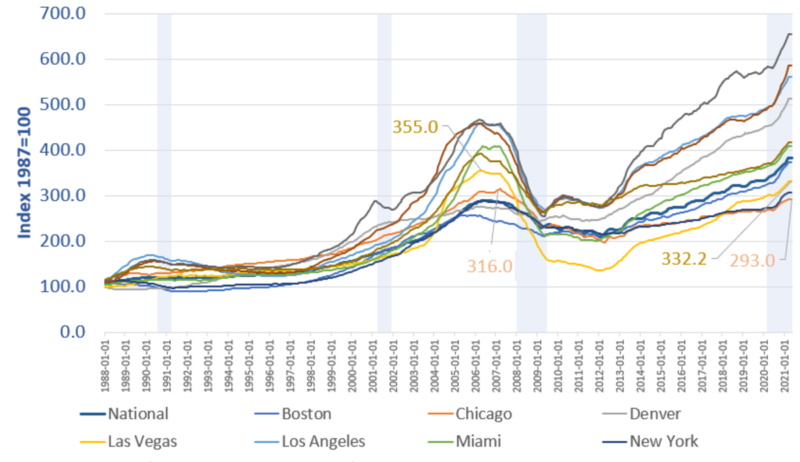 Although home prices are not in the CPI, for an alternate calculation I am giving the Fed a break it does not deserve with that replication. Home prices have risen 111 consecutive months through May 2021.

Those are NOT median prices. Case-Shiller tracks resales of the exact same home over time.

Questions of the Day

Here’s a few paragraphs that caught my eye.

The investment firm confirmed Tuesday that it has reached a deal to acquire Home Partners of America Inc., which owns more than 17,000 houses throughout the U.S. Home Partners buys homes, rents them out and offers its tenants the chance to eventually buy.

Blackstone was among the big investment firms to buy houses in bulk in the aftermath of the subprime crisis, when lenders sold off foreclosed homes at marked-down prices. The New York firm built a portfolio of tens of thousands of single-family homes, then rented them out through a company called Invitation Homes Inc.

In 2019, Blackstone exited from the single-family rental business when it sold its last shares in Invitation Homes, which had become the largest U.S. firm in this industry with 80,000 homes for lease.

The NAR expects housing inventory to rise. If so, who is selling? Why?

If not, who are you competing with to buy?