Congress And Industry Leaders Call For Crackdown On Hospice Fraud 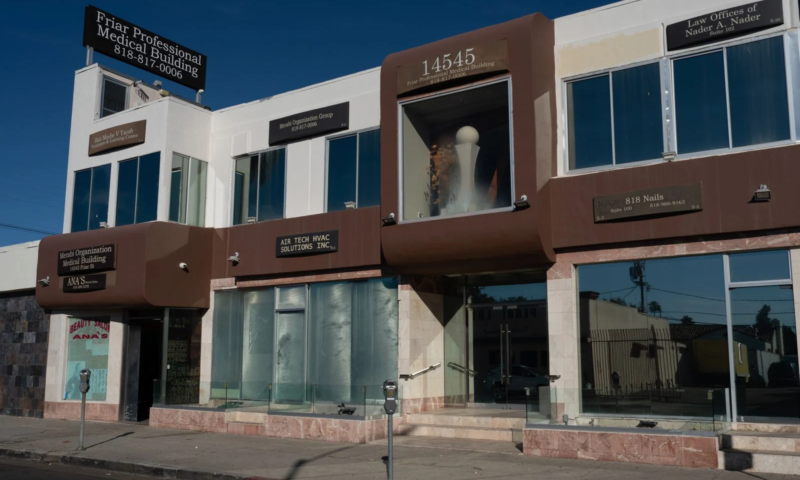 This building on Friar Street in Los Angeles is home to approximately 129 hospice providers, according to state and federal data. Credit: Philip Salata for ProPublica

Following a ProPublica-New Yorker investigation into the hospice industry, members of the Comprehensive Care Caucus and national trade groups are demanding reform.

This article was written by Ava Kofman and originally published by ProPublica.

Less than three weeks after ProPublica and the New Yorker published an exposé of hospice fraud, members of Congress have called on the Department of Health and Human Services to “immediately investigate this situation.”

In a letter sent Friday to the Centers for Medicare and Medicaid Services and the Office of Inspector General, the bipartisan leaders of the Comprehensive Care Caucus wrote that “Medicare fraud cannot be tolerated, especially when it is being perpetrated on our nation’s most vulnerable patients.”

The ProPublica-New Yorker investigation described how the lucrative design of the Medicare benefit incentivizes many profit-seeking hospices to cut corners on care and target patients who are not actually dying. It chronicled the lack of regulation and the frustrated efforts of whistleblowers to hold end-of-life care conglomerates accountable. And it drew on state and federal data to reveal how, in the absence of oversight, the number of for-profit hospice providers in California, Texas, Arizona and Nevada has lately exploded.

The story’s findings are also being cited by lawmakers and lobbyists in New York, where Gov. Kathy Hochul is considering signing legislation to outlaw the creation of new for-profit hospice providers in the state. At the moment, all but two of New York’s 41 hospices are nonprofit. Assemblyman Richard Gottfried introduced a bill, which passed this summer, to keep things that way. “We can close the barn door before the horses have gotten out,” he said. “The article raised the level of awareness around issues with for-profit care.”

Published last month, the investigation provoked what industry leaders have called a “much-needed” conversation on how Americans die — along with demands to improve those deaths. “The abuses detailed in the article call for a reform of the Medicare hospice benefit that can reduce the opportunities for fraud and abuse,” the National Partnership for Healthcare and Hospice Innovation, a group for nonprofits, said in a statement. In public letters, LeadingAge, another association for nonprofit providers, and the American Academy of Hospice and Palliative Medicine, an organization for hospice professionals, separately emphasized that “change is needed.”

Lobbying groups whose members include for-profit providers — the National Hospice and Palliative Care Organization and the National Association for Home Care & Hospice — took issue with the investigation’s focus on “bad actors” but said in a joint statement that its members look forward to working with lawmakers “to implement solutions to address the isolated problems highlighted by the article without jeopardizing access to the Medicare hospice benefit.”

Dr. Ira Byock, a palliative care physician, author and former president of the American Academy of Hospice and Palliative Medicine, echoed the calls for greater monitoring of the hospice system in the wake of the investigation. “Hospice in America is gravely ill,” Dr. Byock wrote in an op-ed published last week by STAT, the health care news site. “I am hopeful that the article will spark a long-overdue internal reckoning by the field — my field — and the industry we gave rise to.”

Hospice began more than 60 years ago as a countercultural charity movement to help patients die with comfort, support and as little pain as possible. After the 1980s, when President Ronald Reagan authorized Medicare to cover the service, dying became a big business. In 2000, less than a third of all hospices were for-profit. Today, more than 70% are. Between 2011 and 2019, the number of hospices owned by private equity firms tripled. For profit-seeking providers, hospice is lucrative: Medicare pays a fixed rate per patient a day, regardless of how much help is offered. The aggregate Medicare margins of for-profit providers hover around 20% compared with just 5% for nonprofits.

Studies have found that for-profit hospices are more likely than their nonprofit counterparts to have less skilled staff, reduced clinical services and fewer home visits in the last days of life. Their patients have longer stays and leave hospice alive at higher rates. Last year, citing the research, three members of the Senate Finance Committee requested information on the quality of hospice services provided by Kindred at Home, the country’s largest home care chain. (Kindred’s hospice subsidiary was recently spun-off and sold to a private equity firm.) “We are concerned that when applied to hospice care, the private equity model of generating profit on a rapid turnaround can occur at the expense of dying patients and their families,” they wrote. Analysis of the data is ongoing, senate staffers said.

Assemblyman Gottfried said that the pending legislation in New York is an attempt to prevent the profiteering that’s unfolded elsewhere from seizing his home state. Jeanne Chirico, who heads the Hospice and Palliative Care Association of New York State, said that her group regularly fields calls from venture capitalists looking to break into the market. So do her members. Mary Crosby, the CEO of East End Hospice, a nonprofit located on Long Island, said that once or twice a month investors make offers. “We’re a particularly attractive acquisition target because we struggle financially and we’re not linked to a larger health care system,” Crosby told me. “But if you’re actually providing the kind of interdisciplinary care that is based on the original hospice mission, as we are right now, you’re not going to be making a lot of money.” Her hospice covers around 20% of its operating costs from donations, she said.

New York would not be the first state to bear down on its hospice sector. California has enacted a temporary ban on new hospice licenses, after the Los Angeles Times uncovered a dramatic increase in hospices that far outpaced the demand for services. In a report released this spring, state auditors found that since 2015 the Department of Public Health had never suspended a hospice license and had revoked a license only once. “The state’s weak controls have created the opportunity for large-scale fraud and abuse,” they said.

ProPublica and the New Yorker’s reporting outlined how California’s pattern of disproportionate growth is spreading to other states. In Arizona, Nevada and Texas, the rise in new Medicare-approved hospices since 2018 now accounts for around half of all hospices in each state. Unlike New York, these states don’t have “certificate of need” requirements for hospices, which means there’s no strict limit to the number of providers that can open in a given area.

The simplest way to understand the recent hospice boom is to see it.

This chart represents Medicare hospices — it does not include the dizzying rise in state licenses — and therefore undercounts the total explosion in end-of-life care providers. (Hospices must first obtain a state license before they can be certified to bill Medicare for their services.) Federal data, for instance, shows just 22 Medicare-certified hospices packed into a building on Friar Street in Los Angeles, but California’s data reveals an additional 107 state hospice licenses registered at the same address. (Although California’s moratorium bars new providers, it does not stop the thousand-plus owners already in possession of state licenses from obtaining Medicare certification and billing the government.)

Industry leaders have expressed alarm about the loopholes in the state and federal certification process that enable sudden clusters of for-profit providers to materialize. A ProPublica review of hospice data in Phoenix showed that a raft of new entities shared the same addresses and network of owners. Some of the Arizona entrepreneurs already operate several hospices in Los Angeles, including out of the building on Friar Street. “These small entities aren’t required to publicly report quality of care data, are often not audited and, because of how the per diem is set up, it’s a gold mine,” said Larry Atkins, the chief policy officer of the National Partnership for Healthcare and Hospice Innovation. “You could very quickly figure out whether a hospice is a real place or a mill that’s simply signing up and burning through patients to bill Medicare. But no one is really doing that.”

Eric Rubenstein, who worked as a special agent at the Department of Health and Human Services’ Office of Inspector General until 2019, said that the Centers for Medicare and Medicaid Services and its contractors are often focused on auditing bigger billers. For the “smaller circuses and clowns,” the government’s lax payment system can be easy to exploit. “The demand for these licenses is predicated on the fact that there’s a huge amount of money to be made quickly in hospice fraud,” he said.

CMS said in a statement to ProPublica that the agency “is aware of the increase in the number of new hospices” requesting Medicare certification, and is “working to ensure they meet all applicable requirements for participation in the Medicare program.”

Last month, four national hospice associations banded together to ask CMS to enact targeted moratoriums in high-growth regions. “In addition to action at the state level, increased federal oversight is needed to protect hospice patients and their families,” they wrote. The groups are currently scheduling a meeting with CMS to discuss their concerns.