Could #WallStreetBets Be The Early Signs Of A Financial Arab Spring? 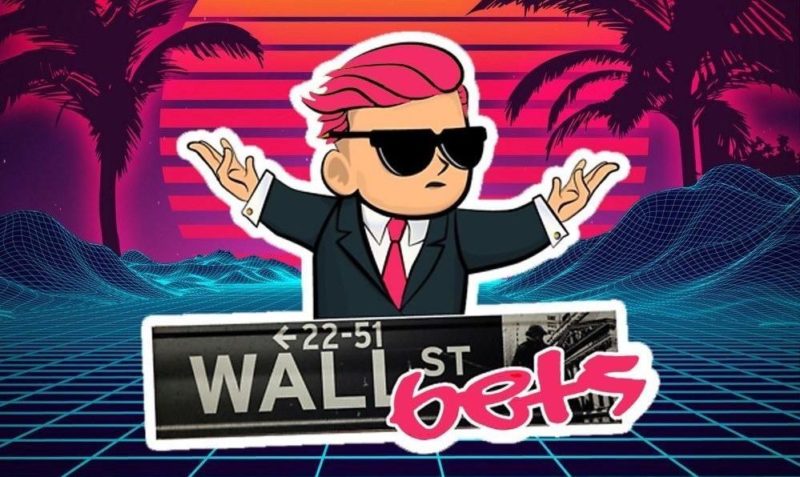 It’s been mere hours since Charles Hugh Smith, Jesse and I finished off our AxisOfEasy Salon 36: Democratizing Stonk Market Manipulation covering the #WallStreetBets situation and things have already morphed in a direction along one of the lines that we speculated was possible: a generalized revolt against financial repression and asymmetric rulesets (a.k.a “rules are for thee, but not for me”).

This article was written by Mark E. Jeftovic of Out Of The Cave.com.

This is about more than a bunch of weaponized autists (self-described as such) end-running the Wall St. establishment for fun and profit.

Charles called it a “rebellion” at one point. Once it appeared as the the establishment was trying to step into Robinhood and get the hedgies off the hook, as that line in the old classic The Usual Suspects went…

“Then, the whole thing turned political…”

I was busy most of the day yesterday, but I kept getting email alerts that my various silver positions were up 10%, trading up on excessive volume, etc. When I did check the precious metals I noted that gold was down, not by a lot, while silver was making a sizeable move. Not unheard of for this to happen, but it’s not common.

Almost didn’t notice this comment on the Hackernews thread on my WallStreetBets proves the System is Rigged article:

It proves something anyway.I’m a moderator of /r/silverbugs and we’ve been getting slammed all morning with either accounts from wallstreetbets or accounts trying to make them look bad, with dozens of brand spanking new or barely used accounts spamming to buy various silver related stocks/funds.I’ve banned more accounts this morning than I have in 2 years.

Then a couple hours ago I saw this:

and that’s when I realized that this thing could get real. A “reverse bear raid” on the $SLV could quite possibly upset more than a few apple carts, and here are the WallStreetBets crew laying out exactly what it entails [archived], and how their self-professed  “AoR” could go about it [archived].

Can they do it? Time will tell. Silver up almost 2% on the day and silver stocks are screaming higher. 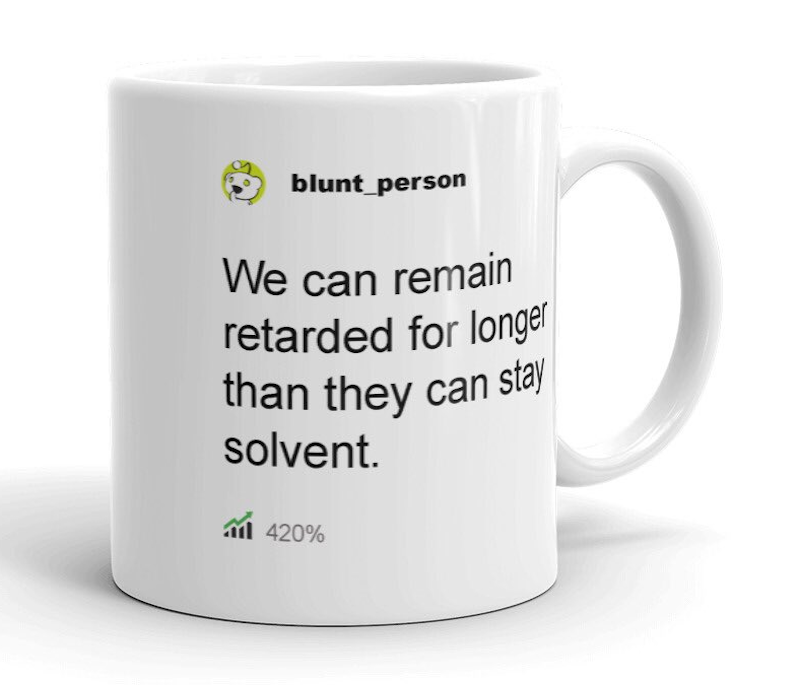 Meanwhile, the battle lines are clearly drawn. Rumours abound that RobinHood slammed the breaks on Gamestop under pressure from their upstream clearing houses or even the SEC. CNBC is trotting out hedgies that even tried to float a “foreign meddling” narrative and the mainstream media hit pieces are starting to drop (TL,DR Trumpism and White Supremacy, what else?) 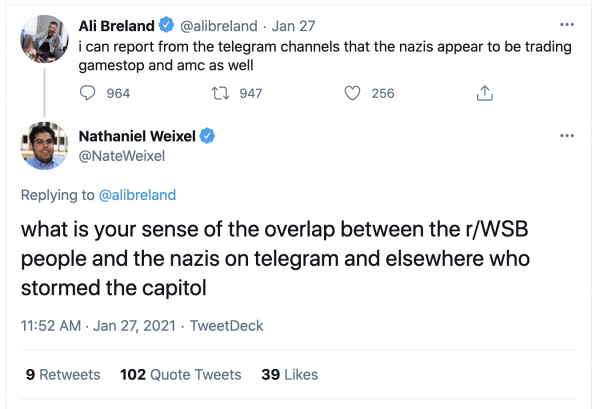 To be fair, Ali Breland did clarify in a subsequent tweet that he didn’t think /r/WSB were N*zis

Big Tech also showing their true colours as usual, deplatforming and canceling right on cue with Facebook putting the kibosh on a large Robin Hood trader group while Discord shut down WallStreetBets

What makes this interesting is where the battle lines are drawn.

and then a @DonaldTrumpJr this:

It indicates that this is not between left vs right, conservative vs liberal thing. This time it’s political along the class line that separates The Cantillionaires from the masses that I’ve been writing about on my mailing list for years.. The underclass, the rabble – the people who were never supposed to win may suddenly have at least a few  billionaires on the run.

Something about this feels like we could be in the opening rounds of some weird morph between the Occupy Wall Street movement of yore, and the Arab Spring. Only this time played out over smartphones, using exotic options spreads …and memes. 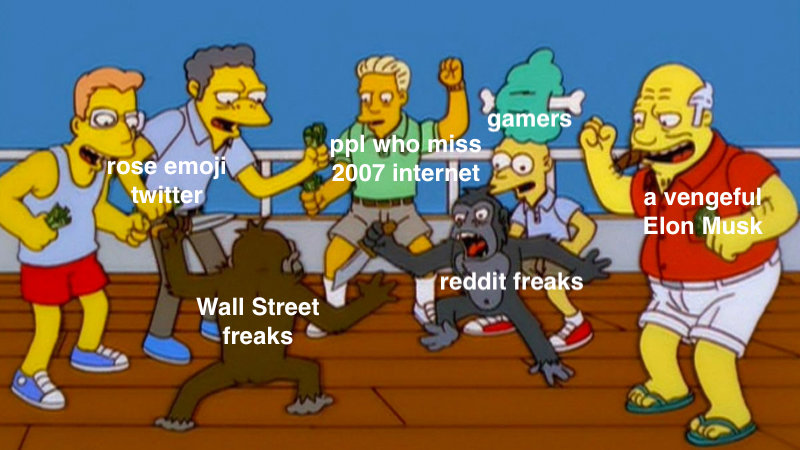 As I sat down to write this, #EatTheRich was trending on Twitter. If you thought 2020 was off the hook, how do you like 2021 so far?