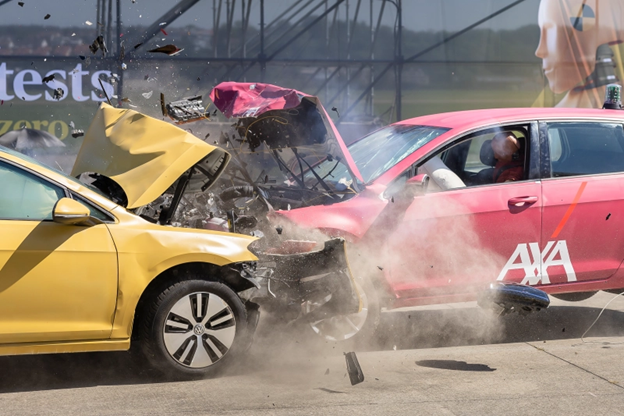 Electric cars cause more damage in collisions than conventional cars — partly due to their incredible acceleration — and the increased weight of e-cars and trucks is a huge concern for occupants of lighter cars and will lead to increased pedestrian deaths, a Swiss insurance company announced after crash tests last month.

This article was written by Gersh Kuntzman and originally published by Streets Blog NYC.

“A look at the accident statistics of AXA Switzerland shows that drivers of electric cars cause 50 percent more collisions with damage to their own vehicles than those of conventional combustion engines,” the insurance giant said in a German-language statement titled, ominously, “AXA Crash Tests 2022 — More collisions and new risks from e-cars.”

The company attributed the higher damage from crashes to what it called “the overtapping effect” that causes electric cars to accelerate far faster than their conventional counterparts using the same amount of force on the acceleration pedal. The “overlapping effect” is “likely to be the reason for the increased claims frequency for high-performance electric cars,” the company added.

“Most electric cars, especially the powerful ones, have a very high torque, which is immediately noticeable when you tap the power pedal. This can result in unwanted, jerky acceleration, which the driver can no longer control,” said Michael Pfäffli, head of accident research at AXA Switzerland.

Also noteworthy, the company conducted crash tests on Aug. 25 that revealed that the sheer weight of electric cars make them a menace. The company crashed two Volkswagen Golfs head-on at 31 miles per hour. The fuel-powered Golf weighed 2,755 pounds while the electric version weighed 3,637 or 32 percent more.

“The [lighter] Golf is exposed to a significantly higher load in this crash and consequently suffers visibly greater body damage,” AXA said. “In a crash, the difference in weight between the vehicles involved is crucial.”

The researchers continued that occupants in both cars would have been safe from injury because “the two passenger compartments remain intact” and “the occupants of both vehicles are well protected. But it becomes problematic for the occupants in older models.”

The crash test summary didn’t even mention pedestrians, who are at greater risk of death from heavier vehicles, as many studies have shown. U.S. authorities pointed out in 2019 that bigger cars are, of course, safer … for their occupants.

And cars are only getting heavier. “Compared to cars built in 2000, which averaged 2,950 pounds, newer cars are around 25 percent heavier,” the company said. “The AXA accident researchers assume that the average weight of a new vehicle will be two tons in a few years due to battery operation.”

The findings, however, did not prompt the insurance company to be wary of covering the next generation Tesla, Bolt or other e-car owners, but did want to wave a warning flag.

“The triumph of electromobility can no longer be stopped. This is not only good for the environment, but also makes driving fun,” said Nils Reich, director of Property Insurance for AXA in Germany. “However, we insurers and our customers also have to manage new risks: E-cars … can often lead to more expensive individual claims.”

That’s certainly not stopping America from beginning a massive drive to electrify the vehicle fleet, despite negative aspects of e-cars such as their demand for minerals that are often mined in an unsustainable or exploitive fashion, their misuse of public space, their contribution to more driving, their weight leading to more road deaths, and how, temporarily at least, more electric cars will allow auto manufacturers to sell more gas guzzlers, too.

The AXA crash tests proved controversial because in one version, a Tesla was rigged to catch fire — an eerie flashback to the famously catastrophic faked “Dateline NBC” crash test in 1992. Like NBC trying to document a gas leak in a GM pickup, AXA was trying to show that electric cars have an Achilles heel, too: Their undersides are not properly armored against crashes.

But in this crash, the Tesla battery was not damaged. AXA merely ignited it to show that e-battery fires are very hard to extinguish.

“If the battery is damaged, it can quickly lead to immense fires,” Reich said. “If there is only a risk that the battery could catch fire, the vehicle [will burn] for days.”

On Sept. 1, the company was forced to issue a statement distancing itself from the stunt — but the statement doubled-down on the dangers of electric cars.

“Statistics from AXA Switzerland show that drivers of electric cars cause 50 percent more collisions with damage to their own vehicles than drivers of conventional combustion engines,” the statement said. “The statistics also show that drivers of more powerful electric vehicles more often cause damage to their own vehicle or to third-party vehicles. We wanted to draw attention to these statistical findings with this year’s crash tests and at the same time raise awareness of the dangers that can arise in accidents involving battery-powered cars.”

The company said that the results of the Golf crash test show that “accident risks cannot be compared with standardized crash tests” that are currently done as part of Europe’s version of the New Car Assessment Program, which should be tightened up to include heavier e-cars, the company asserted.

“Drivers of electric cars should be aware of unintentionally rapid acceleration (the so-called overtapping effect),” the company concluded. “Dealing with this immediate force must be learned. If possible, drivers should manually reduce the level of acceleration behind the wheel … in order to achieve greater resistance when tapping the power pedal.”

Also alarming is the sense of security that drivers, especially in e-cars, increasingly have as cars get heavier.

“Drivers of a heavy vehicle tend to have a higher level of intrinsic safety,” the company said. “This is precisely why they should be aware of their responsibility towards other road users: lighter vehicles are disadvantaged in the event of a crash.”