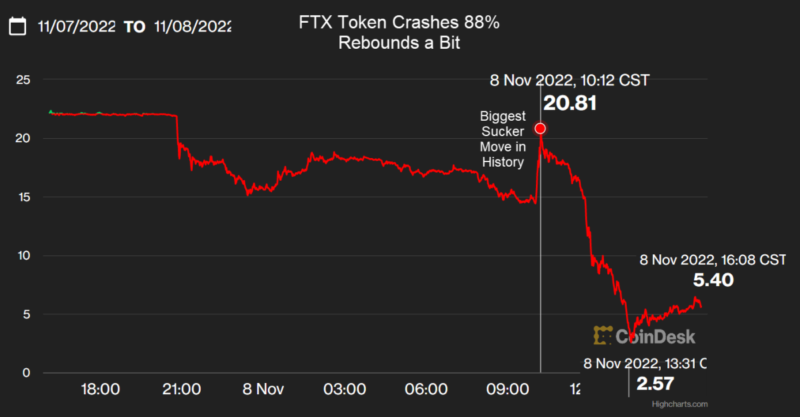 Immediately prior to an 88 percent crash in the FTX crypto, it rallied 44 percent from $14.44 to $20.81, making it one of the biggest sucker rallies in history.

Cryptocurrency exchange FTX, just months removed from looking like a shining survivor in a struggling industry, succumbed Tuesday to a sudden liquidity crunch of its own and was taken over by rival Binance.

The deal signals a power shift in the crypto world, which has been decimated by rising interest rates and investors’ retreat from risk. The pact marks a victory for Binance founder Changpeng Zhao and a humbling comedown for Sam Bankman-Fried, the founder of FTX, which had been growing in size and recognition before a clash between the two men set off a series of events that shook investor confidence in his firm.

The 44 percent rally was due to the announcement of a deal with Binance. It was all over in a matter of about 4 hours, rally to bottom.

The WSJ commented “FTX is the brainchild of Sam Bankman-Fried, the millennial billionaire hailed as a savior of the crypto industry this summer.”

The Bitcoin reaction in similar in time but certainly not magnitude.

Ethereum is down about 15 percent on the day after an initial rally of 9.8 percent.

Dogecoin is also similar but with a much bigger hit than Bitcoin or Ethereum. It’s down 19 percent after a 15 percent rally.

If you have not figured this out by now, there is at least relative safety in Bitcoin vs all the altcoins and tokens.