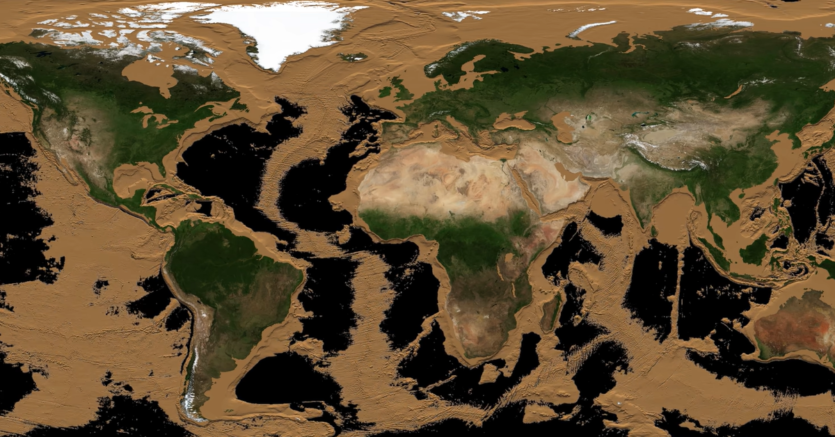 Although many maps of our planet go into great topographical detail on land, almost two-thirds of the Earth’s surface is covered by the world’s oceans.

This article was written by James O’Donoghue and originally published by Visual Capitalist.

Hidden from sight lie aquatic mountain ranges, continental shelves, and trenches that dive deep into the Earth’s crust. We might be familiar with a few of the well-known formations on the ocean floor, but there’s a whole detailed “world” that’s as rich as the surface, just waiting to be explored.

This animation from planetary researcher James O’Donoghue of the Japan Aerospace Exploration Agency (JAXA) and NASA simulates the draining the world’s oceans to quickly reveal the full extent of the Earth’s surface.

How Deep Does the Ocean Go?

Above sea level, Earth’s topography reaches all the way up to 8,849 meters (29,032 ft) to the top of Mt. Everest. But going below sea level, it actually goes deeper than the height of Everest.

Open ocean is called the pelagic zone, which can be broken down into five regions by depth:

To put ocean depths into context, the bottom of the ocean is more than 2,000m greater than the peak of Mount Everest.

What “Draining” the World’s Oceans Reveals

For a long time, the ocean floor was believed to be less understood than the Moon.

The sheer depth of water made it difficult to map without newer technology, and the tremendous pressure and extreme temperatures make navigation grueling. A manned vehicle reached the deepest known point of the Mariana Trench—the Challenger Deep—in 1960, almost 90 years after it was first charted in 1872.

But over the last few decades, humanity’s understanding and exploration of the ocean floor has grown in leaps and bounds. O’Donoghue’s animation shows just how much detail we’ve been missing.

The first easily noticeable characteristic is the Earth’s continental shelves, which appear quickly. Most are visible by 140 meters, though the Arctic and Antarctic shelves are far deeper.

The animation then speeds up, as thousands of meters of depth reveal the tops of small mountain ridges and aquatic islands. From 2,000 to 3,000 meters, mid-ocean ridges appear that span the length of the Arctic, Pacific, and Indian oceans.

From 3,000 to 6,000 meters of ocean drained, these aquatic mountains slowly give way to the vast majority of the ocean floor. Little changes over the final 5,000 meters except to illustrate just how deep the ocean’s trenches reach.

Of course, technically the bottom of the Challenger deep is the deepest known point of the Mariana Trench. As satellite and imaging technology improves further, and aquatic mapping voyages become more possible, who knows what else we’ll discover beneath the waves.