Over the past two decades, online piracy has proven a massive challenge for the entertainment industries.

Some copyright holders have tried to go after individual pirates in court but, increasingly, third-party intermediaries are targeted as well.

There are several lawsuits pending in US courts, where rightsholders accuse Internet providers of not doing enough to stop piracy. One of the main allegations is that ISPs fail to terminate the accounts of repeat infringers in ‘appropriate circumstances’, as required under the DMCA.

Earthlink became one of the latest targets in this quest. The ISP was sued by a group of litigious filmmakers, headed by Voltage Pictures. The movie companies own the rights to well-known movies such as “Ava”, “I Feel Pretty” and “The Cobbler,” which are publicly shared via BitTorrent networks.

Through their lawsuit, the filmmakers aimed to deter piracy activity by Earthlink customers. These types of legal battles can often last for years but this one was settled rather quickly.

Last month the parties informed the court that a tentative settlement had been reached. Yesterday they filed a request to dismiss the case which reveals an interesting obligation on Earthlink’s part.

The dismissal notice doesn’t mention any money changing hands. However, Earthlink agrees to request its wholesale providers to block access to the torrent site YTS, one of the most-visited pirate sites on the Internet.

“Plaintiffs have requested and Defendant has agreed to request its wholesale providers to use commercially reasonable efforts to block access to YTS on their servers in the United States used for Defendant’s services,” both parties inform the Georgia federal court.

This agreement is a big deal. As far as we know, it’s the first time in history that a US-based Internet provider has openly backed a pirate site blocking order. 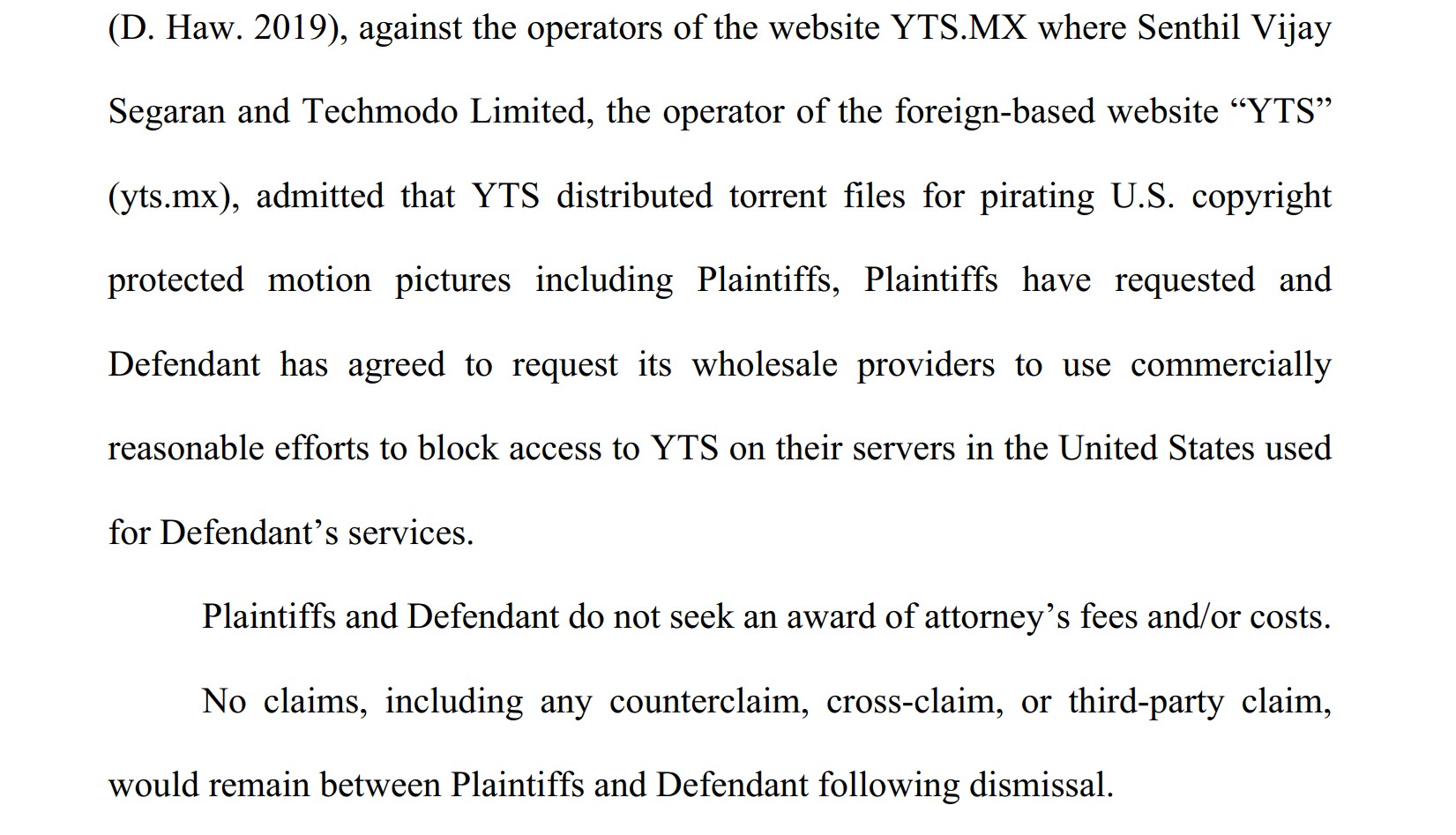 Earthlink was a big name in the past but today it’s a relatively modest player. However, it resells services from bigger brands, which are the wholesale providers the legal paperwork refers to.

The agreement doesn’t mention any wholesalers by name. That said, Earthlink sells (or resold) infrastructure from AT&T, Time Warner Cable, and perhaps other large companies as well.

The language Earthlink agreed to doesn’t come with any strings attached. The ISP simply has to “request” its unnamed wholesale providers to block YTS, but there are no repercussions if that doesn’t happen. At least, not for Earthlink.

Attorney Kerry Culpepper, who represents the filmmakers, has a history of using leverage obtained in one lawsuit to pursue claims against other parties. That plays a role in this case as well.

YTS is the blocking target for a good reason. The operator of the torrent site was sued by the same filmmakers a few years ago. These cases were eventually settled for over a million in damages, but the site remained online.

In addition to paying damages, YTS also shared information about its users with the filmmakers. This information was then used to pursue claims against individual pirates and VPN providers.

A dated admission by the YTS operator, that the site distributed copyright infringing material, is now being leveraged to request Earthlink to take action. And that might just be the start of a new legal quest.

Based on the judicial tactics we’ve observed over the years, it wouldn’t be a surprise to see the filmmakers take action against the wholesale providers. That is, if they choose to ignore Earthlink’s request to block YTS.

At this point, we’re venturing into speculation mode, but it might not be a coincidence that the filmmakers voluntarily dismissed their liability lawsuits against AT&T and Time Warner’s Comcast, just days after they reached a settlement with Earthlink.

Those lawsuits can be refiled in the future, potentially with additional evidence added to the complaints. It wouldn’t be a massive surprise if that involves some newly obtained leverage as well.