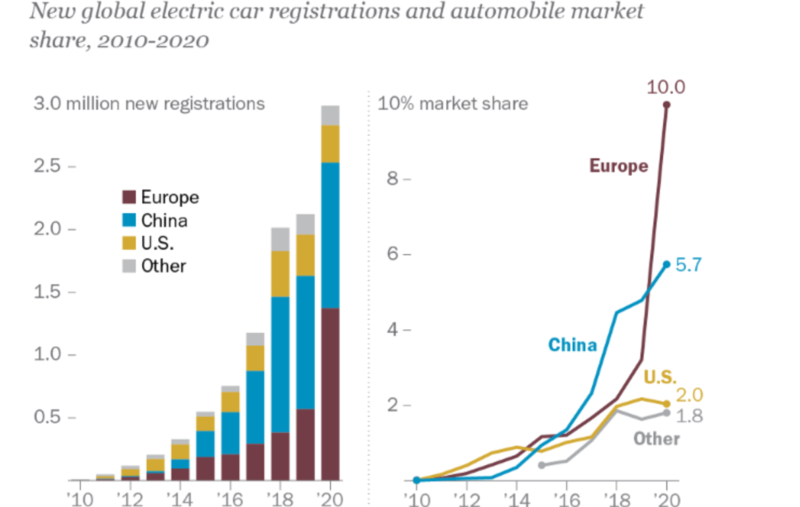 Outside of a few major metropolitan areas, electric vehicles (EVs) aren’t all that common in the U.S. While their numbers have grown rapidly in absolute terms in recent years, that’s from a relatively small base.

In each of the past three years, EVs accounted for about 2% of the U.S. new-car market.

California has by far the highest share of EVs of any U.S. state – which is to be expected, given that for decades the state has required carmakers to build EVs and has used an array of rebates and other incentives to encourage Californians to buy them. As of 2018, the most recent year for which federal data is available, California had about 12 EV registrations per 1,000 people; the next-highest state, Hawaii, had roughly six registrations per 1,000 people.

Relative to the size of its vehicle fleet, though, Washington, D.C., may be the most convenient place in the U.S. to drive an EV. The 237 charging stations in the federal district have a total of 630 outlets, or one for every 487 privately owned cars and trucks on D.C. roads. (Vermont and, yes, California place second and third; the national average is one outlet for every 2,570 private and commercially owned cars and trucks.)

The above chart shows seasonally-adjusted annualized sales for each month.

Hertz just announced it would buy 100,000 Teslas over the next 14 months but that includes Europe as well.

For details, please see Tesla Joins the Trillion Dollar Club and Gets a Big Order From Hertz.

It’s reasonable to expect other car rental companies to join in.

But we need to put things into perspective.

US annual vehicle sales have been averaging about 17 million a year since 2015 except for a March to August Covid impact in 2020 and the current supply chain disruption. Numbers are down since June due to a chip shortage.