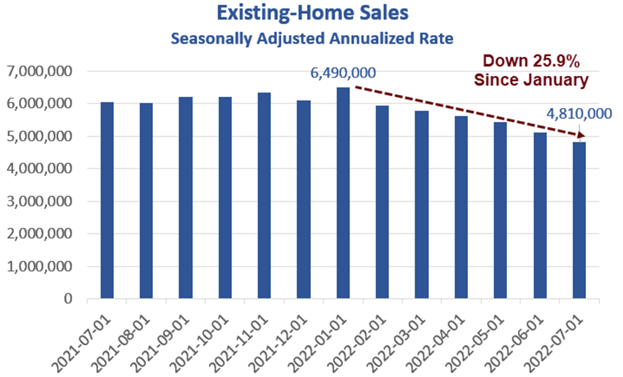 The housing slump accelerates with another 5.9 percent decline in July, down 20.2 percent from a year ago, and 25.9% since January.

The panic buying caused by free money stimulus and absurdly low rates thanks to the Fed will remain untouched until prices crash, mortgage rates come down or both.

With median prices rising a record 125 consecutive months of year-over-year, the decline in mortgage rates from over 6 percent in June to 5.48 percent today will not do much to spur sales.

For discussion of the above chart, please see Housing Affordability Index Drops to Lowest Rate Since 1989, Still Way Too High.

The Fed wanted to create inflation, and did, far more than it understands because it does not see the rise in housing prices as inflation.

Payback has arrived. Expect very weak growth for years to come as the Fed struggles with inflation and the end of globalization.

Looking ahead, housing rates to be miserable and durable goods (appliances, furniture, cabinets, etc.) miserable along with housing.

By the way, when is the last time existing home sales collapsed 25.9 percent in six months with the economy not in recession?