Fed Chair Is Concerned Over The Rapid Rise In Retirements 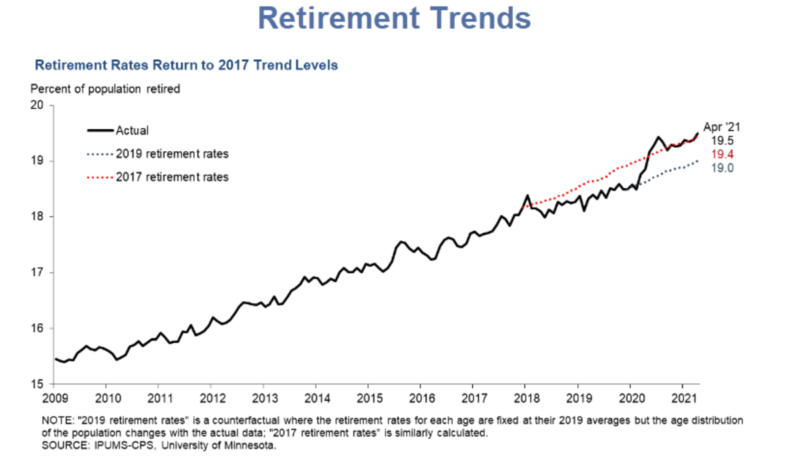 Population-adjusted data shows a huge surge in retirements and that has the Fed concerned.

The lead chart is from the Role of Retirement by the Dallas Fed.

Since February 2020, the economy-wide employment-to-population ratio has declined by 3.2 percentage points, or by about 8.5 million workers. About 1.6 percentage points (4.1 million people) of the decline consists of unemployed workers who will likely eventually return to employment.

The remaining roughly 1.7 percentage points (4.4 million) represents a higher share of individuals not in the labor force—meaning that they are not currently actively looking for work.

Chart 4 [lead chart above] shows how a hot labor market in 2018 and 2019 likely prompted many older workers to delay retirement, causing the share of the population in retirement to increase more slowly than the rate of aging would have implied. We see that during 2020 and 2021, the rate of retirement returned to its 2017 trend. How this trend unfolds—along with the degree to which caregiving, unemployment benefits and other special factors influence employment—will impact the ultimate size of the available workforce

One group that is increasing its participation is teenagers. According to the latest employment report, the employment-to-population ratio for individuals age 16–19 increased to 32.8 percent in April, exceeding its prepandemic level of 32.1 percent in February 2020.

This increase in teenage employment accounted for approximately 78 percent of the increase in employment in the April 2021 jobs report. While this may signal increased opportunity for younger workers, it could also have negative implications for educational attainment and future productivity.

In particular, a wide range of school superintendents in the Eleventh District are expressing concern about dropout rates for their junior and senior classes and the long-term impact on the workforce if these young adults don’t return to achieve their high school certificate.

Employment in Age Group 16-19 is Fully Recovered, Who Else is Winning?

I too noted the rise in teenage employment. For details, please see Hooray! Employment in Age Group 16-19 is Fully Recovered, Who Else is Winning?

“This is an extraordinarily unusual time, and we really don’t have a template of any experiences of a situation like this,” said Fed Chairman Jerome Powell in a press conference Wednesday following the central bank’s June meeting. “We have to be humble about our ability to understand the data.”

The rapid rise in retirements translates to fewer people available to work—meaning the labor market could hit the full employment threshold at lower levels of employment and a lower labor-force participation rate than before the pandemic.

“It is a different economy,” Mr. Powell said. “We don’t actually know exactly what labor-force participation will be as we go forward.”

People Are Quitting Their Jobs at a Record Rate

I discussed retirements on June 13 in People Are Quitting Their Jobs at a Record Rate: What’s Going On?

A reader noticed I had a data point incorrect for age group 60-64. I added a correction note referring back to this post.

Population-adjusted, the age group showing retirements is 65 and older. First, here is the raw data.

Employment Change Pre-Pandemic to May 2021

On a percentage basis, age group 65+ accounts for over 34% of the population adjusted decline in employment since February 2020.

These numbers are bound to get much worse.

Those currently 65-69 (18.2 million) will be five years older too, also with declining employment population ratios.

Although Powell is correct that we do not know were these ratios will go, he should not at all be confused by the direction.

I will discuss this further in a future post that  incorporates population projections.