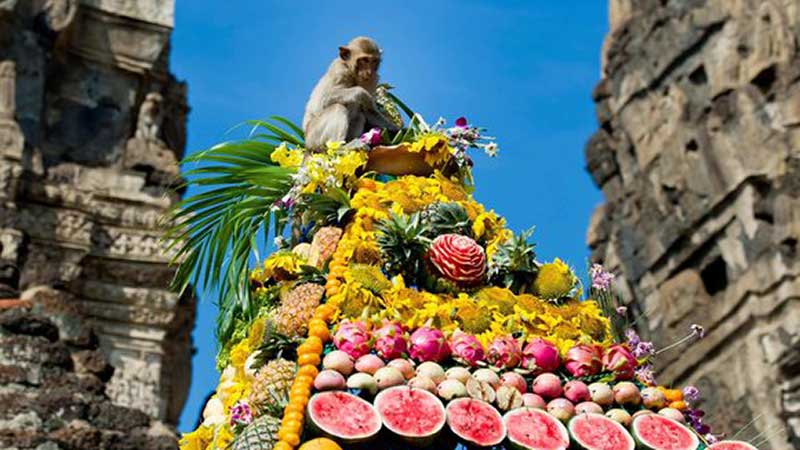 With social distancing still the norm, it’s doubtful that one of Thailand’s most colorful and disgusting tourist attractions will take place this November: the “Monkey Buffet Festival of Lopburi.”

The festivities take place in one of Thailand’s most ancient cities, Lopburi, which dates back at least a thousand years. Adventurer Marco Polo noted the city in his journals. Home of the majestic ruins of the Phra Pang Sam Yot Temple, Lopburi also overflows with the area’s macaque monkeys, who roam throughout the city’s streets uncaged.

The monkeys are prized as symbols of luck and prosperity. In the Hindu faith, Hanuman is the monkey warrior god, depicted in religious art as a human with a muscular physique and a monkey’s face. Legend has it that Prince Rama called upon Hanuman to help save his wife, Sita, from the clutches of a demon lord. Hanuman rescued Sita, and in so doing, gave the monkeys a revered status as a sign of good fortune.

Left to their own devices, and elevated to a higher spiritual status, the local macaque monkeys in Lopburi have taken unfair advantage of their human hosts. Visitors are startled by the frequent sight of a macaque brazenly walking up to people in public places to snatch food from their hands.

The Monkey Buffet Festival is one part Hindu observance, one part spectacle. Organizers dreamed it up for camera-toting tourists. Held on the last Sunday of November, coordinators line up tables at the 13th century temple and stack great quantities of food, ranging from locally grown fruits and vegetables to candy and cans of soda, in pyramidal piles for the monkeys.

Prior to the simian feast, dancers dressed as monkeys entertain the crowd until the four separate banquets, spaced in two hour intervals, are laid out. The macaques descend on the tables and gobble up the food with wild abandon. The monkeys, overwhelmed by their good fortune, then begin to throw food and their own feces with wild abandon. The event brings smiles and laughter until the monkeys begin to act, well, like monkeys, grabbing people’s purses and backpacks and pulling their hair.

Officials reassure visitors that while there are occasions when the monkeys bite or behave aggressively to people, they remain an infrequent occurrence as the animals know not to bite the hand that feeds them.

On a far more serious note, some scientists have noted that many chimpanzees engage in odd rituals, such as throwing stones at trees and pulling fellow chimps’ noses and ears to signify the deaths of members of their family. Given that apes are closely related to humans, researchers believe that this chimpanzee behavior could be indicative of the origin of human religion. So the staged rituals of the Lopburi Monkey Buffet Festival may evoke the presence of religious pre-human behavior in our evolutionary brethren.