Household Net Worth Hits Record $137 Trillion, Up $25.6 Trillion Since COVID 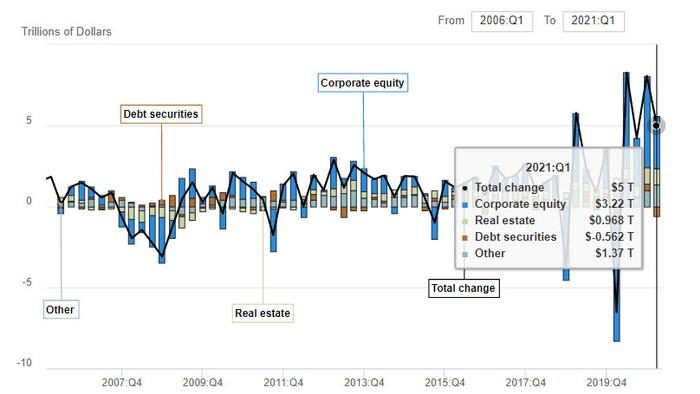 Another quarter, another record high in (mostly 0.01%er) household net worth.

The Fed’s latest Flow of Funds report released at noon today showed the latest snapshot of the US “household” sector as of March 31 2021, which confirmed that one year after the biggest drop in household net worth on record when $8 trillion was wiped out in Q1, 2020, in the 1st quarter of 2021, the net worth of US households soared by $5 trillion, or 3.8%, to a record $136.9 trillion.

This article was originally published by ZeroHedge.com.

This means that over the past 12 months, US household net worth has increased by:

… a grand total of $25.6 trillion. And since the bulk of this wealth goes to a fraction of the wealthiest 1%, it means that the covid pandemic has been the biggest wealth transfer in history making America’s richest even richer.

Looking at the composition of the wealth change, $3.2 trillion came from a gain in stocks, $968 billion was from an increase in real estate values, with $1.4 trillion coming from “other sources.”

It wasn’t just stocks and houses: net savings also grew at an annualized pace of $571.7 billion in the first quarter after a $702 billion surge at the end of 2020, also a product of the epic federal stimulus. Elevated savings have been a key driver of the snapback in consumer spending seen in recent months and will likely continue to bolster consumption in the months ahead.

Elsewhere, household debt grew by 6.5% in the first quarter of 2021 (this and subsequent rates of growth are reported at a seasonally adjusted annual rate). Home mortgages increased by 5.4%, about in line with the previous quarter. The surge in mortgages has been fueled by the Fed keeping borrowing costs near zero. That’s led to record-low mortgage rates, which have bolstered demand for homes. The median selling price for previously owned homes is at a record high.

Looking at the various components of nonfinancial business debt, nonmortgage depository loans to nonfinancial business increased very modestly, on net, by $11 billion. Excluding the loans extended under the Paycheck Protection Program, nonmortgage depository loans declined. Moreover, the extension of new PPP loans was partially offset by the forgiveness of some of the PPP loans extended in 2020.

Overall, outstanding nonfinancial corporate debt was $11.2 trillion. Corporate bonds, at roughly $6.7 trillion, accounted for 60% of the total. Nonmortgage depository loans were about $1.1 trillion. Other types of debt include loans from nonbank institutions, loans from the federal government, and commercial paper.

Unfortunately, most Americans aren’t benefiting from recent gains in wealth, noting that while the pandemic has led to a surge in savings and opportunities for many to buy a home or invest, the downturn has disproportionately impacted low-income workers, many of whom rent and don’t participate in the stock market.

While the Fed has yet to update its wealth composition, the latest data as of Q4 shows that the top 1% accounts for nearly $40 trillion of total household net worth, with the number rising to nearly $90 trillion for just the top 10%. Meanwhile, the bottom half of the US population has virtually no assets at all.

Bottom line: the data underscore how the government’s fiscal scramble to speed up the economic recovery paired with the Fed’s continued ultra easy monetary policy have helped to protect the wealth of the richest Americans: those who own assets, unlike the bottom 50% of America who mostly “own” debt.