How Big Tech Revenue And Profit Breaks Down, By Company 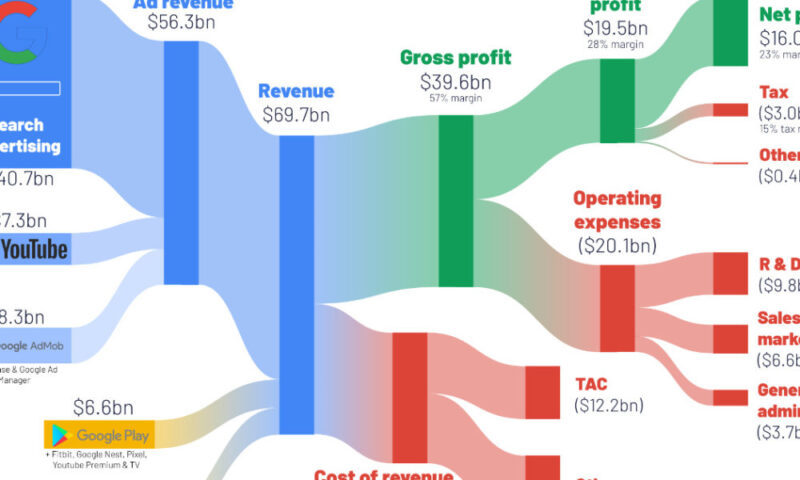 In the media and public discourse, companies like Alphabet, Apple, and Microsoft are often lumped together into the same “Big Tech” category. After all, they constitute the world’s largest companies by market capitalization.

This article was written by Truman Du and originally published by Visual Capitalist.

And because of this, it’s easy to assume they’re in direct competition with each other, fiercely battling for a bigger piece of the “Big Tech” pie. But while there is certainly competition between the world’s tech giants, it’s a lot less drastic than you might imagine.

This is apparent when you look into their various revenue streams, and this series of graphics by Truman Du provides a revenue breakdown of Alphabet, Amazon, Apple, and Microsoft.

So how does each big tech firm make money? Let’s explore using data from each company’s June 2022 quarterly income statements.

In Q2 2022, about 72% of Alphabet’s revenue came from search advertising. This makes sense considering Google and YouTube get a lot of eyeballs. Google dominates the search market—about 90% of all internet searches are done on Google platforms.

Perhaps unsurprisingly, Amazon’s biggest revenue driver is e-commerce. However, as the graphic above shows, the costs of e-commerce are so steep, that it actually reported a net loss in Q2 2022.

As it often is, Amazon Web Services (AWS) was the company’s main profit-earner this quarter.

Apple’s biggest revenue driver is consumer electronics sales, particularly from the iPhone which accounts for nearly half of overall revenue. iPhones are particularly popular in the U.S., where they make up around 50% of smartphone sales across the country.

Besides devices, services like Apple Music, Apple Pay, and Apple TV+ also generate revenue for the company. But in Q2 2022, Apple’s services branch accounted for only 24% of the company’s overall revenue.

Microsoft has a fairly even split between its various revenue sources, but similarly to Amazon its biggest revenue driver is its cloud services platform, Azure.

After AWS, Azure is the second largest cloud server in the world, capturing 21% of the global cloud infrastructure market.