I Made A Mistake – Big Deal! 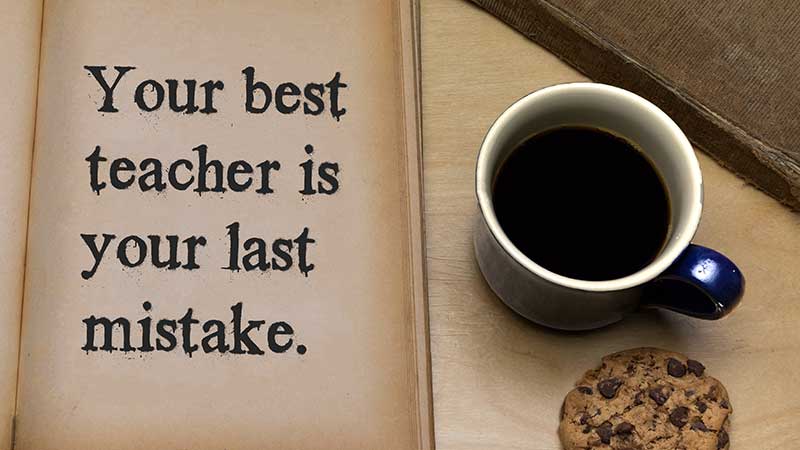 Back in the day, I owned a retail store in the northwest corner of the San Fernando Valley called Magic World. It started as a small magic store in Canoga Park, on Topanga Canyon Blvd. After a year or so, we added costumes to our mix, both for sale and for rental. (Did you ever see a person in a gorilla costume on the side of the road? That was us!)

The costume business took off big time! It was good all year long, but especially at Halloween. We relocated to Chatsworth and doubled the size of the store to accommodate our increased business. We rented costumes for all kinds of events – birthday parties, themed weddings, even television shows and movies. (We provided most of the comical themed costumes for “The Tonight Show.”)

After a couple of years, we also added the sale of balloons to our mix. We would break down the mix between 1. Pick up of balloons, 2. Delivery of balloons, 3. Helium tank rentals. and finally 4. Balloon Artistry (arches, columns, event decoration and the like.) I was fortunate enough to be on the world record-breaking crew for the closing ceremonies of the 2000 Democratic National Convention. I was on the “Red Team”. This meant days of blowing up red balloons. We also provided all of the balloons for the Times Square scenes for the first Spiderman movie. 10,000 balloons each day blown up by 7 A.M. for 12 days of shooting!

When one area of the store was slower, another was crazy busy! It seemed to be a great combination of the three major areas (magic, costumes, balloons) for us.

Every year in March, my management team and I would go to the National Halloween show in Chicago to see what was hot and new for that year and to place our orders. I took a team of 4-5 each year. We would fly out the day before the convention started and do some “touring” of some of the local costume and balloon stores in the greater Chicago area. These were friends that we had met over the years, and we could see what was selling and how they displayed their wares. There was not any threat to them of us stealing ideas because we were over on the west coast. This was years before the internet.

One year, we went to Fantasy Costumes, the largest costume store in Chicago. George Garcia was the owner and a great guy! He encouraged me to expand into the “paper goods” category, which was mostly self-service. This meant paper plates, napkins, plastic cutlery, streamers and decorations of all types with solid colors, themes and licensed patterns. Birthday parties were the number one theme, but baby showers, anniversaries, and “over the hill” parties were very popular. I did my research and planning. I talked to other party store owners and company reps prior to the launch. We jumped all in. I even took over the storefront next door and knocked a wall out to make room for the expansion. I gave it a full 18 month run to get the word out with marketing, advertising and the like. And it was… a bust. It didn’t take off like I had hoped. The dollars did not add up as it related to income and expenses. We shut it down, discounting and finally donating what was left to charity.

We gave it a fair shake, but made a mistake. Bad on the ego and self-esteem? Sure. Did that make us go out of business or file Chapter 11? Nope. We chalked it up as a learning experience.

We all make mistakes, either personally or professionally. Should we beat ourselves up because of it? Nope. It becomes a learning experience. Did Thomas Edison quit trying after thousands of attempts to create the electric light bulb? What was his feeling when his laboratory burned to the ground? To paraphrase, “Look everyone, burning there are all of the ways NOT to make the light bulb.” Everyone will make multiple wrong choices during a lifetime. Pick yourself up and keep going. Learn and take notes. It’s all good. It’s no big deal!

John Tolson is the Director of Marketing and Membership for the Simi Valley Chamber of Commerce, where he has been for 10 years. He also has an independent insurance business, where he is a broker for many home and auto carriers. He has owned both a retail and wholesale business for over 18 years. Currently, he is also a Planning Commissioner for the City of Simi Valley. He can be reached at [email protected]