If California is Facing A Rare Megadrought, Why Is The State Releasing Water From Reservoirs? 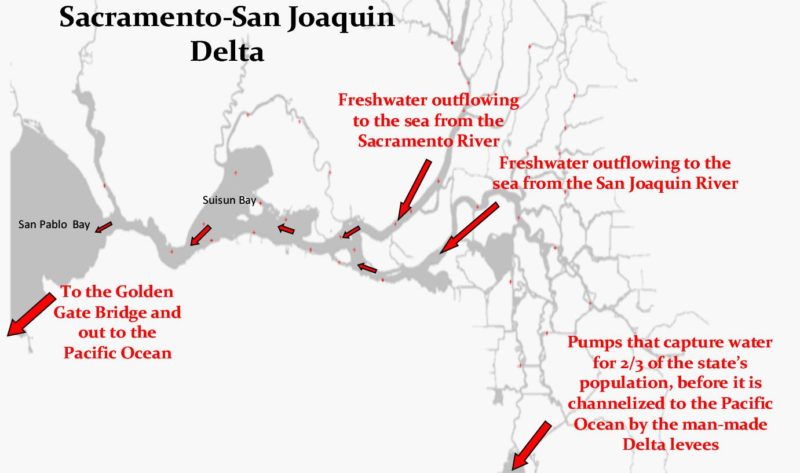 Image Courtesy Of The California Globe

Water shortages, lack of groundwater recharge, contaminated drinking water, and subsidence are all man made in California.

This article was written by Katy Grimes and first published on the California Globe.com.

Last week, when California Gov. Gavin Newsom was in Oroville, with a 60% empty Oroville Dam Reservoir as his backdrop, he said he is not ready to declare an official drought emergency. “Instead, he promised he can manage the situation without resorting to an emergency declaration, which could help his administration clamp down on water use,” the San Francisco Chronicle reported. They also reported that the threat of a recall election could be at the root of his decision.

Maybe someone can ask the governor why in the last two weeks, 91% of Delta inflow went to the sea. State pumps are at -97%, federal pumps at -85%. Outflows show 6,060,828,600 gallons. While he still has his emergency powers, can’t the governor order stoppage of this outflow if California really is on the precipice of severe water shortages and a “rare mega drought?”

People forget the winter of 2019 brought 200 percent of average rains and snow pack. Yet the state still held back on water to farmers, and residents are facing rationing, the Globe reported May 2019.

The state uses about 47.5 percent of its developed water supply for the environment, including wild river flows, managed wetlands and wildlife preserves, habitat and water quality control for fish, and required Delta outflows, according to the Department of Water Resource. Water is diverted in times of drought and times of plenty to the Sacramento-San Joaquin Delta, leaving much less for irrigation or for Californians to drink, residents will be limited to 55 gallons per day.

The Globe recently reported, as for water storage, AccuWeather says:

Statewide, Sean De Guzman, chief of snow surveys for the California Department of Water Resources, said the largest reservoirs are holding around half of their total capacity. When current snowpack melts, reservoirs in the state are still only expected to be filled up to 58% of average capacity.

California’s water supply flows from north to south. To reach the lower 2/3 of the state and 25 million users, that water must travel through the Delta first. At the south end, water is pumped by the State Water Project and Central Valley Project pumps, put into San Luis Reservoir, and distributed south, east, and west. If those pumps don’t operate, the water supply that enabled California to be developed, inhabited, and cultivated, goes out into the Pacific Ocean instead.

You will hear the radical environmentalists rage that the Central Valley and Southern California are diverting so much water that fish are suffering. The fact is, in the last 14 days alone, 90.8% of delta inflow became seawater. On average, about 80% is not pumped to supposedly protect fish.

This is devastating right now because the temperatures are rising, the modest amount of high country snow we received is melting, and we should be capturing as much water as we can, while we can. Pumping has been ratcheted back to a trickle instead. State pumping today is at 2.9% of capacity, and federal pumping today is 15%.

We are now living the intentional deconstruction of the aquifers and the groundwater. We are watching our home-grown food supply, and the most fertile farmland on the planet being destroyed. We are drinking water from the bottom of the barrel where contaminants are in concentrated form without the freshwater dilution for wells. Our infrastructure—-canals, roads, and bridges, are sinking because without water to plump it up, land drops.

This is happening at the hands of man, not climate change. Water shortages, lack of groundwater recharge, contaminated drinking water, and subsidence are all man made in California. Today an amount of water equal to a year’s supply for 264,000 people became unusable saltwater.

What AccuWeather didn’t say is that the state has been letting water out of reservoirs across California for months now. And it’s not going to farmers, growers, ranchers or urban use. Environmental policy says the water “flows” from reservoirs are necessary to produce a rebound of endangered Delta smelt and Chinook salmon. However, these policies are a failure as neither species have been collected in all of the latest trawling surveys, where they spend several days a month searching in more than 200 spots. This practice of releasing water and hoping fish improve, has been unsuccessful for nearly 30 years, according to Diener. Both species are close to extinction.

California’s drought conditions are actually historically normal, and just as California’s last drought was billed as the driest period in the state’s recorded rainfall history, this drought is being called a Rare Mega-Drought.” So why is the government breaking up hydroelectric dams, and letting much-needed water rush to the sea for Coho salmon instead, unless turning California into a wasteland is the goal.

Who decides that this is good policy? Environmentalists? And why do enviros have such a stranglehold on the state’s politicians? Don’t they need water too?

The human cost of over-regulation is bleeding California businesses, agriculture and middle-class families.

California’s population has increased dramatically while water storage has not. The population in California has doubled since 1977. And lousy planning in the hands of environmentalists and government has left the state in dire need during this and other recent droughts.

California’s last drought, five years long, ended in 2017, which allowed Gov. Jerry Brown’s State Water Resources Control Board to restrict outdoor watering in urban areas by as much as 36% – but it’s clearly not urban areas that use the bulk of the water in the state since 50% of California’s water supply goes to environmental uses.

Diener said, “50% of California’s water supply goes to environmental uses, 40% is converted to the food we eat and the clothes we wear, and the remaining 10% is for urban use. Families did not waste their way into a water shortage and cannot conserve their way out. Saving 25% of a 10% urban use equals 2.5%. Ongoing water releases continue to put fish over people, and both are suffering. More water rights holders than ever before are about to receive stop-using-water notices.”

Rather than encourage lawmakers to bring him legislation to beef up the state’s water storage capacity during the last drought, Gov. Jerry Brown signed new laws to limit each citizen to just 55 gallons per person per day by 2030, and 50 gallons by 2050. What will Gov. Gavin Newsom do?