Inflation Surges Near A 40-Year High. Wages Aren’t Keeping Up 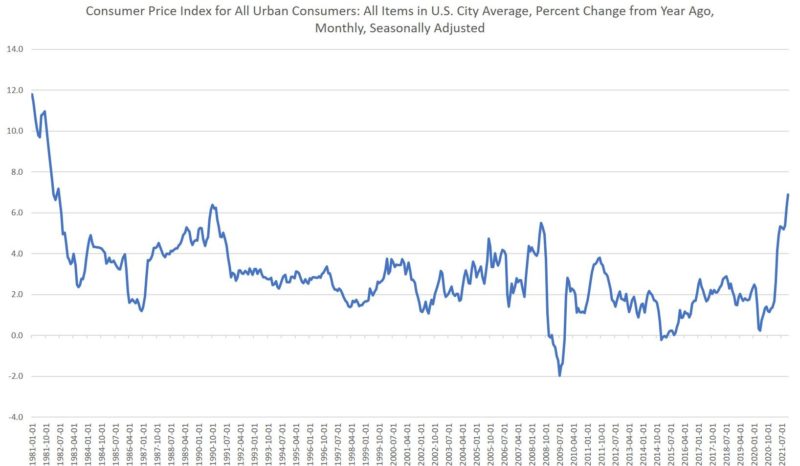 Image Courtesy Of The Mises Institute

According to new data released Friday by the Bureau of Labor Statistics, price inflation in November rose to the highest level recorded in nearly forty years. According to the consumer price index for November, year-over-year price inflation rose to 6.8 percent. It hasn’t been that high since June 1982 when the growth rate was at 7.2 percent.

This article was written by Ryan McMaken and originally published by the Mises Institute.

This surge in price inflation comes only a week after Fed chairman Jerome Powell backtracked on earlier comments dismissing the threat of price inflation, and suggested previous attempts to define recent inflation as “transitory” wasn’t quite accurate. Declaring last week that it was “a good time to retire the word,” Powell continued his pivot to addressing the danger of inflation “becoming entrenched.”

It’s unclear to what degree inflation might already be entrenched, but year-over-year growth in the CPI has been over five percent for the past six months—and on a clear upward trajectory.

Looking at this gap, we find that real earnings growth has been negative for the past eight months, coming in at negative 2.1 percent year-over-year growth for November 2021. November was the eighth month in a row for negative growth in earnings.

Moreover, according to the Conference Board, US salaries are growing at a rate of approximately 3 percent this year.

In addition to CPI inflation, asset-price inflation will likely continue to be troublesome for consumers as well. For example, according to the Federal Housing and Finance Agency, home price growth has surged in recent months, with year-over-year growth now coming in at 16.4 percent.

Don’t Expect Much from the Fed

Politically, there is now clearly pressure on the Fed to “do something” about inflation. In addition to inflation’s impacts on earnings, inflation already has the potential to impact corporate profits as well. Nonetheless, today’s inflation news did not send the Dow down, as inflation fears were probably already priced in following Powell’s comments last week on rising inflation and his statements on the potential for speeding up the Fed’s ultraslow tapering process:

In testimony before a Senate panel on Nov. 30, Federal Reserve Chairman Jerome Powell tipped the warning that the central bank would discuss speeding the taper of its $120 billion monthly bond purchases at the December meetings. His comments followed a parade of Fed speakers, who all suggested the central bank could end the program sooner than the current timeline of June 2022.

But just how much will the Fed really scale back QE? Yes, inflation can impact profits, but scaling back QE can also be a big problem for asset prices. The Fed has proven to be extremely cautious on this latter front. Even if the Fed speeds up this tapering process, it will still be a stretch to describe the Fed’s posture as anything approaching “hawkish.” With the current plan, the Fed may end new asset purchases in 2022, but its portfolio will still be approaching $9 trillion and there are no apparent plans to cut the size of the portfolio.

It’s unlikely the Fed will seriously contemplate selling any sizable number of assets any time soon. For one, the Fed will still face pressure from the administration and Congress to prop up demand (and thus push down interest rates) for Treasurys.

In spite of all this enduring Fed caution, some analysists on Wall Street are trying to claim that the economy is red hot. Jim Cramer, for example is now claiming the US is on the edge of a new Roaring Twenties. After all, new unemployment claims are remarkably low, and the employment situation is seemingly wonderful. But as investor Sven Henrich points out, “If you went back in time to any period & told people that in 2021 with the lowest claims in 50 years, record job openings, 8% GDP growth & 6.7% CPI the Fed is not only still running QE & zero rates but is refusing to raise rates you’d get locked up in the loony bin.”

But why can’t the Fed see how great things are, and why isn’t it therefore raising the target fed funds rate and dumping its assets? If the economy is roaring to life, demand for these assets should be abundant.

In many ways, the current situation with the Fed is just a continuation of what we saw during the Yellen and Bernanke years. After 2010, there was frequent talk of how the economy was growing and doing well, yet the Fed only dared engage in slight tightening of monetary policy beginning in late 2016. Today, there’s apparently still little enthusiasm for any sudden moves, lest Wall Street get spooked. The Fed may talk like it’s concerned about consumer inflation, but it’s shown it’s much more committed to keeping asset prices high, and that precludes any significant effort at reining in inflation.