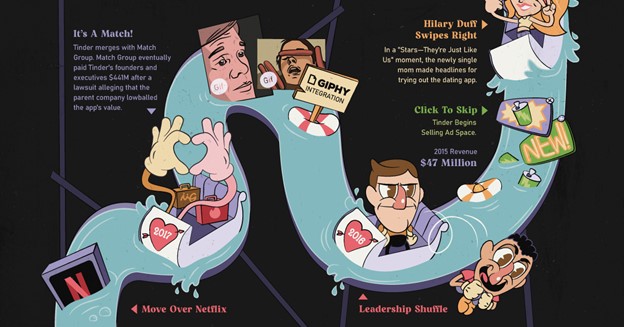 A decade of swiping and over half a billion downloads later, Tinder still leads the market share of online dating apps in the United States at 32%.

This article was written by Lydia Adeli and Nick Routley, and originally published by Visual Capitalist.

What started as a “hook-up” app 10 years ago for college students, is now a mainstream hit that is globally used in 190 countries and 45 languages.

The graphic above highlights key moments that have shaped the app’s success, using data from Match Group’s investor presentations and news reports.

From Hatch to Match: The Early Days of Tinder

The concept of the app emerged when the original founding partners, Sean Rad and Joe Munoz, won a hackathon in 2012. Their collaboration lead to the development of Tinder (originally named Matchbox).

Marketing the app to college students was a strategic decision that quickly gained the interest of millennials. This young demographic had been traditionally underserved in the online dating world, and with the global adoption of smartphones, a mobile-only dating app hit the right spot at the right time.

Monetization began in 2015 when premium features became exclusively available for paid users. Annual revenue that year was $47 million and by 2021 that grew to $1.7 billion.

Match Group acquired Tinder in 2017, with a $3 billion valuation. But at the time, very few could predict the stellar run Tinder would have, having risen to become the top dating app in the world and one of the most popular apps overall.

This surge in popularity is also reflected in the financials — Tinder is just one of the 30 dating apps that Match Group owns, but it represents over 50% of their overall revenues. In addition, Tinder is closing in on generating $2 billion per year.

Today, Match Group is worth roughly $17 billion, and by some estimates Tinder is worth around $9 billion, over triple the price of the original acquisition.

Note: Tinder’s value is based on the valuation multiples for online dating companies as well as Tinder’s revenues as a portion of Match Group’s total.

The swipe feature was an integral part of Tinder’s design, and it revolutionized the dating world. Gamifying dating was a novel concept when the feature was introduced back in 2012.

From the 1998 film “You’ve Got Mail” to today’s dopamine-inducing hit of “It’s a Match!,” it’s easy to see the influence technology has on the way we date and mate.

Below is a snapshot of app features that have been driven by technology and culture:

Rating people’s attractiveness can be a controversial subject. Websites like Hot or Not and Mark Zuckerberg’s Facemash are cringe-worthy reminders of the internet’s past.

During the app’s early development, the discovery of a new match relied partially on the “Elo” rating system to score desirability. Attractiveness was evaluated by how often people swiped. The more selective you were with swiping, the higher your attractiveness was rated within the algorithm.

But now according to Tinder’s pressroom:

“Elo is old news at Tinder.”

Instead, Tinder’s algorithmic criteria for profile discovery depends on the users:

Tinder now says that proximity is a key factor in how people match on the app.

The Future of Tinder: A Changing Demographic

Today, as the company attempts to target Gen Z, the company’s revenue growth expectations are more lukewarm thanks to shifting cultural preferences,

And keeping the app relevant to a young demographic requires thoughtful consideration that goes beyond just adding new technological features. According to research organization YouthSight, more than 90% of Gen Z’ers report having frustrations with dating apps.

Only time will tell if technological incentives such as features for the metaverse, or virtual coins that further gamify the dating app, are attractive enough for Tinder to compete against the allures of meeting people IRL.