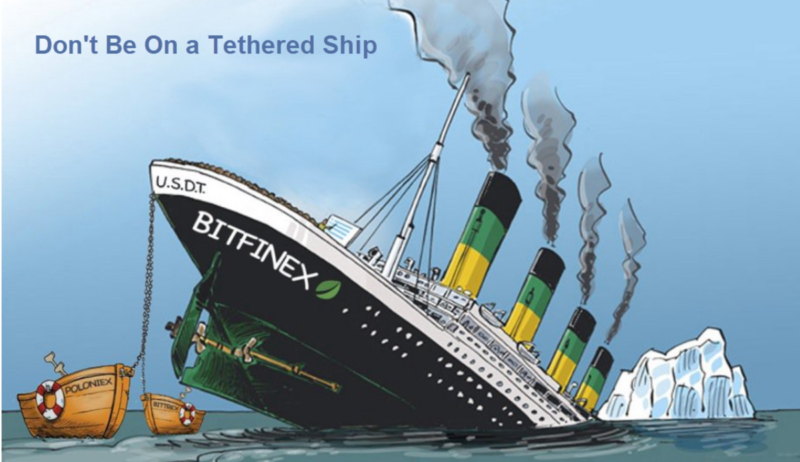 Is the Money Really There?

I took a look at Tether on October 17, 2018 in Tether’s Mysterious Crash: Is the Money Really There?

I did not believe the money was there then, and I certainly don’t believe it now.

That as big or bigger than Bernie Madoff’s Ponzi scheme originally pegged at $50 billion but later upped.

A Tweet chain by Stephen Diehl, @smdiehl has the explanation. It’s lengthy so I reduced it to bullet points, emphasis mine.

I object to this statement made in point #2: “If you’re trading crypto, then you probably don’t like those rules since you’re probably doing something shady”

Perhaps things are shady “by volume” but it’s more than a bit questionable to suggest the “majority of people” are doing something shady.

I also take exception to point 23. Tether is may be a Ponzi scheme but that does not make the entire crypto market a Ponzi scheme.

Point 23 is thus questionable as well. Only exchanges that deal in Tether are undercapitalized and only to the tune of their Tether holding.

That could easily collapse everything, but it isn’t a certainty.

What started me down this Tweet Chain Path was Inside Crypto’s Doomsday Machine by “Crypto Anonymous” (CA).

It’s an article by a HODLer who threw in the towel after deciding in January that Tether is fraudulent.

CA noted Binance, Bit-Z and HitBTC are “unbanked” exchanges. He also comments on the amazing amount of leverage that some exchanges allow.

These unbanked exchanges give away free Tether for using their systems.

CA also noted something mentioned above regarding round amounts: “Tether outputs (e.g., 400,000,000 USDT in the same transaction) in every block — regardless of the prevailing exchange rate or anything else.”

So that he can claim authorship at a later date if he wants, CA posted a hash block with his real name padded by random characters.

“Don’t be on a Tethered Ship”

I added that caption to an image from a 2018 Medium article How to avoid getting ‘Tethered’.

@StateCommon reports “Saturday at 6am EST a billion $1 Tether coins were printed. A perfectly round number.”

Major Tether transactions are in perfectly round numbers. This alone attracts suspicion.

I suspect what happened is someone siphoned off at least $60 billion in this scheme, possibly holding some of it in Bitcoin the rest siphoned off to paper currencies or gold.

The price of Bitcoin could collapse over this and that’s what some have concluded.

But a Ponzi in Tether does not necessarily imply a collapse in Bitcoin even though Tether was used to manipulate the price of Bitcoin higher.

The New York Attorney General’s office (NYAG) has settled with Bitfinex over a 22-month inquiry into whether the cryptocurrency exchange sought to cover up the loss of $850 million in customer and corporate funds held by a payment processor.

The NYAG’s office announced the settlement Tuesday, formally ending the inquiry that kicked off in April 2019. Under the terms of the settlement, Bitfinex and Tether will admit no wrongdoing but will pay $18.5 million and provide quarterly reports describing the composition of Tether’s reserves for the next two years. More significantly, these reports will match information Tether already provided the NYAG about its reserves. The NYAG will bring no charges as part of the settlement.

Settlement does not imply lack of guilt nor does it imply the money is really there.

Indeed, the conclusion was that it isn’t.

Mr. Whale, @CryptoWhale reports US Treasury says cryptocurrencies pose a serious tax-evasion risk and calls for #crypto transfers over $10,000 to be reported to IRS.

He also reports another $1 billion printed out of thin air.

Meanwhile at the SEC

Speculator @TheSpeculator0 notes that Tether has more commercial paper than Amazon, Google, Apple, and Microsoft, only topped by financial corporations.

Reporting? Where Is It?

Why did Transparency Stop?

On May 3, Coinbase reported Tether (USDT) is now available on Coinbase

If Tether is fraudulent, Coinbase is now a part of the chain.

A Word About Speculation Tolerance

Will They Ban Bitcoin?

It’s far easier to get support for stopping money laundering or wasting energy.

Regarding point#3, my question was What would happen to the price of Bitcoin if the US did not allow merchants and banks to make Bitcoin transactions?

My Bitcoin ban tweets dismisses an outright Bitcoin ban but adds mining bans or mining taxes. And similar to the Hunt brothers cornering Silver, authorities could also allow sales but no purchases.