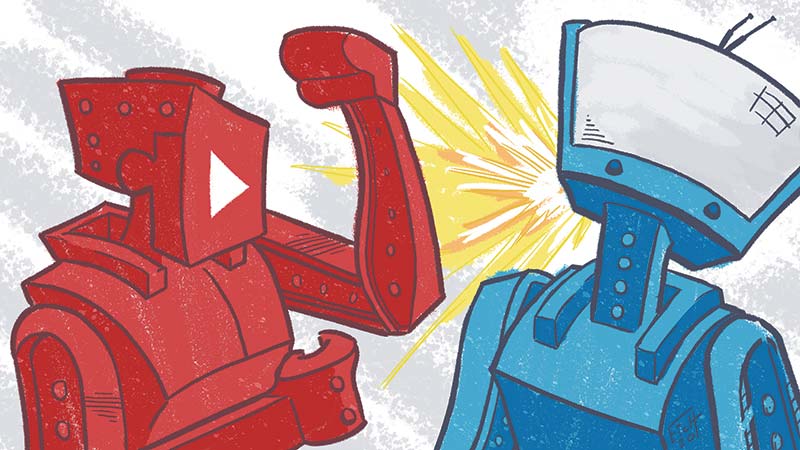 When someone thinks about YouTube, depending upon their age group and how much time they spend online, they might have different views and interpretations of the platform. Is it a media company? Is it an ad agency connecting businesses to potential consumers? Is it a place where people post funny videos about animals and babies? Is it home to the largest assortment of podcasts on the planet? Is it inundated with large media companies’ shows (i.e., late-night shows)? Is it an advertising platform?

Yes, to all of those.

YouTube is home to the largest collection of posted videos on the planet and contains all kinds of videos; from the bizarre like ‘Don’t Hug Me I’m Scared,’ to movie reviews like the kind that RedLetterMedia produces, and political commentators’ videos like the ones that Tim Poole posts. Over the years, YouTube has amassed an enormous library of content, and due to its rise in popularity, it has run into direct competition with television.

According to Statista, in 2019, YouTube’s global advertising revenues amounted to $15 billion, up from $11 billion in the preceding fiscal period. According to MediaPost, total T.V. advertising in 2019 was $76.1 billion, which is down from $79.3 billion in 2018. Now, there are no comparing revenues between these two media – television makes far more money than YouTube, at least for now, but when it comes to viewership, the numbers are shifting more and more in YouTube’s favor.

According to Marketing Charts, in Q3 2018, television viewership time per day for 18-34-year-old Americans dropped by 17.2%. This translates into an average of one hour and fifty-one minutes per day of watching television, which is nearly four hours less than the 50-64 age group, and five hours less than the 65 and up age group. Additionally, traditional television only reached 73% of 18-34-year-olds. Conversely, according to Hootsuite, YouTube is the second most-watched platform for watching videos for 18-34-year-olds (after Netflix), with over 81% of all Americans aged 18-25 using the platform on a daily basis, and 71% of people aged 26-35 years old used the platform on a regular basis.

One of the keys to understanding YouTube is to think of it as television, and not a website. You do not think of television as delivering content from just one station or source, you think of it as a medium, from which content is delivered via multiple channels or sources. YouTube is essentially the same thing; a platform for content from many sources. If you look at YouTube as a website, it is the second most visited website in America, only behind Facebook, and if you look at it as a search engine, it is the second-most used search engine in America, only behind its parent company, Google.

So why is YouTube growing in viewership and television is on the decline? There are a variety of reasons why this is the case. For one, YouTube is free, (television subscriptions can cost anywhere from $24 to $100 a month, according to Techwalla). Large corporations have emphasized moving their expensive/high-quality shows onto their streaming services (or are preparing to do so), and the content on YouTube is a lot better than the content on television. YouTube has something for virtually every audience on the planet. If a person likes politics, there are thousands of channels on YouTube catered to that audience. If someone would rather listen to basketball talk and analysis, there are dozens of channels on YouTube that discuss nearly all aspects of basketball (including the YouTube channel Dom2k who hosts a show on our podcast network, U Cast Studios), or if someone likes creepy stories read to them in a manner that will give them goosebumps, they are in luck, there are plenty of channels on YouTube that produce that kind of content.

As more time passes, YouTube’s daily viewership and time spent on the platform is going to dwarf television’s by such a large amount, that future college student will be writing papers on how there used to be a time when a band of suits in high-rise buildings was deciding what Americans wanted to watch, instead of the paradigm where Americans choose what they watch, and by whom, and what they want to see is individualized content produced out of bedrooms.