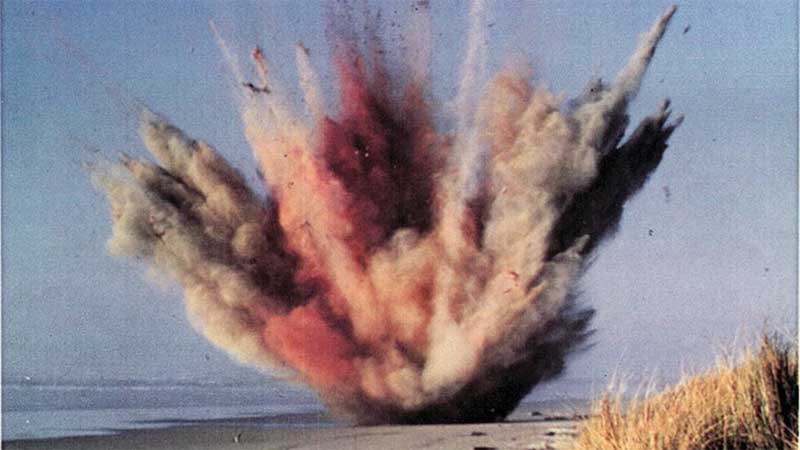 It was an unusually sunny day on November 9th, 1970, along the central Oregon coast. The small beach town of Florence, which sits at the mouth of the Siuslaw River, began its seemingly routine Monday preparing for the work week ahead. But all was not what it seemed. In the darkness of the previous night, a dead sperm whale, 45 feet long, weighing an estimated eight tons, had washed ashore. Within three days, the unsuspecting residents of Florence would witness an event that would forever etch their beloved town’s name in the pages of absurd history.

As the eastward ocean breeze picked up by early Monday morning, a burgeoning, rancid stench sheathed over Florence. By mid-morning, the Oregon Highway Division, which at the time had jurisdiction over the beaches, was notified of the dead whale. After consulting with the US Navy, a decision was made to detonate the whale. The idea, and hope, was that the eight-ton whale would disintegrate, and seagulls, crabs, and other scavengers would then clean up the remnants.

It was now Thursday, November 12th. By noon, the morning gloom had mostly dwindled and made way for a bit of sunshine to warm the air. The Highway Division had sought the expertise of George Thornton, an engineer, who by his admission, did not quite know how much dynamite would be needed to achieve the safe and successful detonation of the whale. Appearing irresolute in a television news interview just before the scheduled discharge, Mr. Thornton conceded that he was chosen to carry out the fateful blast because his supervisor was out hunting, and unavailable. The stage was set for everything to go wrong.

In the three days that followed the discovery of the carcass, the otherwise monotonous small town had something to talk about. Word of the whale blast had spread all across Oregon. Portland’s KATU-TV even sent a news crew to document the blast. Folks from nearby towns migrated to Florence to bear witness to what promised to be a spectacular event. One particular bystander, who happened to be a military veteran with explosive training, pointed out that the nearly one-thousand pounds of dynamite were far too much. His expertise was ignored, and at 3:45 pm, with television news crews, experts, enthusiasts, and skeptics on hand, the explosives were discharged.

KATU-TV’s live broadcast caught the countdown and subsequent blast on film. The massive explosion disintegrated the whale carcass, launching massive chunks hundreds of feet into the air. In the footage, which, according to a BBC study, is the most-watched TV news report of all time on the internet, spectators can be heard cheering in the first few seconds following the explosion. But what went up, eventually came down, and in the ensuing moments, the legend of the Exploded Whale was born. The detonation had not gone as planned. The whale carcass did not fully disintegrate. Large, heavy chunks of rotting whale blubber rained down on bystanders, rooftops, and cars as far away as a quarter of a mile. Spectators who initially oohed and awed were now sent scrambling for safety. Murphy’s Law was in full effect, and what could have gone wrong, indeed went wrong.

The aftermath of the blast left most of the whale carcass intact. What was sent into the sky landed on people, buildings, and left several cars in nearby parking lots damaged. A few cars had their roofs caved in by larger blubber chunks. Luckily, no one was hurt, except perhaps the Highway Division and the lead engineer’s egos. Frightened by the blast, the seagulls were nowhere to be seen. The Highway Division was left to swallow its pride and muster the effort to clean up the mess they created.

Nearly half a century later, in June of 2020, Florence, Oregon opened its doors to Exploding Whale Memorial Park. A park dedicated to the memory of the most infamous day in Florence’s history. It offers views of the Siuslaw River, the dunes on which the Exploding Whale once laid, picnic tables, and a great conversation piece for its patrons.