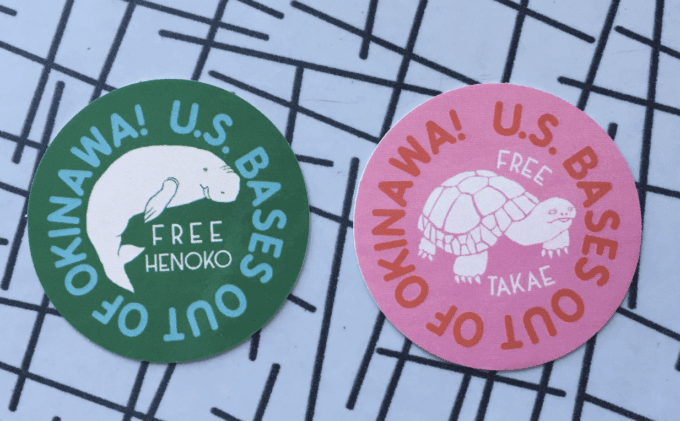 Photo via Etsy, where you can purchase these stickers.

On 23 December last year, the Japanese Government informed the Kyodo News service that in the event of a “Taiwan Contingency” the US military, with the help of the Japanese Self-Defense Forces, would set up a string of attack bases in the “southwest islands” of Japan. This news got a brief notice in a few Japanese newspapers and a few more scattered around the world (though not, to my knowledge, in the US) but was headline news in both of the Okinawa papers. Not surprisingly, people here are quite interested in what it means.

This article was written by C. Douglas Lummis and originally published by World Beyond War.

“Southwest Islands” means mainly the Ryukyu Archipelago, also known as Okinawa Prefecture. “Taiwan contingency” presumably means an attempt by China to regain control of Taiwan by military force. In the expression “Attack bases”, “attack” is understood as “attack on China”. But if China is attacked from Okinawa that would mean, international law being what it is, China will have the right to defend itself by counterattacking Okinawa.

From this we can understand why the US and Japanese governments have included only Okinawa (plus a sliver of land at the southern coast of Kyushu) in this hypothetical combat area. Okinawans have long known what the Japanese Government means when they repeat (over and over) that Okinawa is the only possible location for any new US bases in Japan: Mainland Japan wants no more than the small number they have (with their accompanying crimes, accidents, ear-splitting noise, pollution, etc.), and Mainland Japan has learned that it has the power to keep the main part of the base burden on Okinawa, legally a part of Japan, but culturally and historically, a colonized foreign land. The Government report says nothing about “attack bases” in any part of Tokyo, for example, becoming a war zone, though it has its bases. It seems that the Government imagines it can concentrate not only the inconvenience and humiliation of foreign bases, but also the horror of the war they bring with them, in Okinawa.

This is loaded with ironies. The Okinawans are a peaceable people, who do not share the militaristic Japanese Bushido ethic. In 1879, when Japan invaded and annexed the Ryukyu Kingdom, the King begged them not to build a military garrison in their land, as it would bring war with it. This was refused, and the result was as predicted: the catastrophic last battle of World War II was fought in Okinawa. After the war, while in the first years many Okinawans had no choice but to work on the bases that were (and still are) occupying their farmland, they have never given them their approval (and have never been asked to) and have been fighting against them in multiple forms to this day.

Many see this as turning into a repeat of their experience of 1945, when war not their own was brought to their country, and they paid the heaviest price: over one in four of their people dead. Now they have unwanted bases again in their country, and more being planned, likely to have the same result. The Okinawans have no quarrel with China, nor with Taiwan. Should such a war begin, very few will support any side in it. It’s not just that they will hold an opinion opposed to it; when a colonizing country fights a war against a third party in the territory of the colonized people, that doesn’t make it that people’s war. Even if the US and Japan make Okinawa a battleground in this war, that doesn’t mean that the Okinawans themselves will be, existentially, “at war”, even as the noncombatants making up a “home front”. Yes, the US bases are in their land, but that’s because the Tokyo and US Governments insist that they be there, ignoring the Okinawan people’s will. The irony is that should the killing begin and things go as the Japanese Government plans, it is the Okinawans who will bear the brunt of it. And no one will be indicted as a war criminal for this “collateral damage”.

Just a few days after this news appeared in the local papers and TV, Okinawans began talking about starting a movement dedicated to stopping this war from coming to Okinawa. Just while this discussion was going on, the “Ukraine Contingency” began, giving Okinawans a picture of what might happen here. No one expects the Chinese military to land infantry here or seek to capture cities. The Chinese interest will be to neutralize those US “attack bases”, including Kadena, Futenma, Hansen, Schwab, etc., and to destroy their missiles and attack aircraft. If the Japanese Self-Defense Forces join the attack, they can also expect counterattack. As we know from the many wars of recent decades, bombs and missiles sometimes land on target and sometimes land elsewhere. (The Self-Defense Forces have announced that they have made no provision for protecting the lives of non-combatants; that will be the responsibility of local government.)

The official founding of the new organization No Moa Okinawa-sen – Nuchi du Takara (No More Battle of Okinawa – Life is a Treasure) is to be announced at a gathering on March 19 (1:30~4:00PM, Okinawa Shimin Kaikan, in case you happen to be in town). (Full disclosure: I’ll have a few minutes on the mike.) It’s going to be awfully hard to come up with a winning strategy, but it’s just possible that one of the second thoughts giving pause to these various belligerents could be that starting a “contingency” that includes Okinawa would certainly lead to the violent deaths of many members of one of the world’s most peace-loving peoples, who have nothing whatever to do with the issues in this conflict. This being one among the many excellent reasons for avoiding this most foolish of wars.