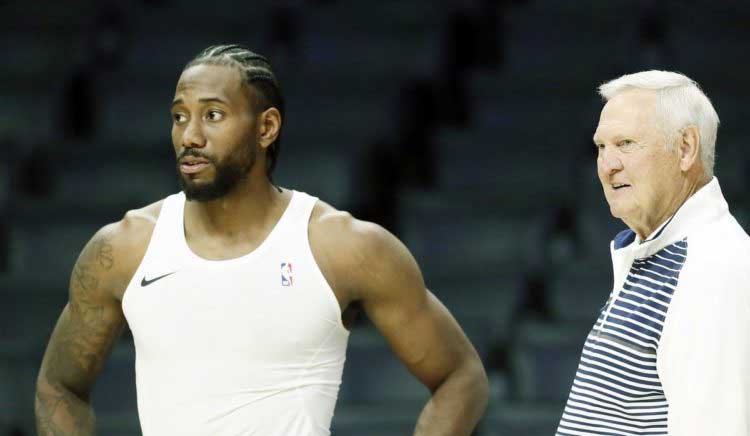 Jerry West will forever be remembered as a Laker. He made his name as the team’s star shooting guard who spent nearly his whole career trying to win a championship, denied several times by Bill Russell and the Celtics before finally beating the Knicks in 1972. After West’s time as a player ended, his deference to Pat Riley helped launch the latter’s coaching career and the Showtime Lakers era while his acquisitions of Shaquille O’Neal and Kobe Bryant in 1996 spawned another legendary dynasty.

This article was written by Austin Green of Lakers Outsiders.

So it probably stung older Lakers fans quite a bit when TMZ published a voicemail of someone sounding like West referring to the Lakers as a “sh*tshow” in summer 2019. True, West was (and still is) a member of the Clippers front office, and the voicemail took place during the middle of the Kawhi Leonard free agency sweepstakes. (Johnny Wilkes, an apparent Leonard associate who leaked the voicemail to TMZ, is suing West and the Clippers for $2.5 million he says they promised him in exchange for swaying Leonard to sign with the Clippers. The NBA is separately investigating the claims while West and the Clippers have denied any wrongdoing.)

Still, I get how Lakers fans, especially older ones who still remember West’s many, many contributions to the franchise, could be stung by West’s (alleged) words.

That said, it’s hard for me to get too riled up about the language West allegedly used in his voicemail, especially given the broader context.

First, Jerry West has not been a member of the Lakers organization for nearly 20 years. He left in 2002 to join the Memphis Grizzlies front office, and reported rumors have long swirled that a big factor in his departure was that he objected to Jeanie Buss’s relationship with then-head coach Phil Jackson. That’s the same Jeanie Buss who has been controlling owner of the Lakers since her father died in 2013.

So when Buss made changes to the team’s front office in January 2017 and again after Johnson’s resignation, it comes as little surprise that she never pursued a reunion with West despite reportd that the logo was very open to the idea. Even now, there seems to be no love lost between West and the current Lakers boss.

The second is that, frankly, sports executives trash other teams and franchises behind closed doors all the time. West has been a member of the Clippers since 2017, and at the time of the voicemail, Los Angeles’s two NBA teams were bidding to sign Leonard, the defending NBA Finals MVP, in free agency.

Some of the first things I thought of when I saw the TMZ headline were some conversations I have had with a few Major League Baseball executives I have become acquainted with. In my admittedly limited experience, it is not uncommon for sports executives to take subtle (or not so subtle) shots at other franchises in private. This applies to the NBA, too. Jeanie Buss appeared to mock the Clippers and owner Steve Ballmer in an email leaked to the media in early 2019, referring to Ballmer as “Ballz” and threatening to treat him like her brothers, whose decision-making power over the Lakers she wrested away in a messy legal battle.

West’s message to Leonard’s associate also took place in the midst of a heated recruiting battle for one of the consensus best basketball players of his era. It would be naive to think that any of the teams involved would shy away from running a negative campaign against their competitors.

Even Jerry West himself once trashed the very same organization he now works for when Bryant considered leaving for the Clippers as a free agent in the mid-2000s, and for good reason. As he recounted in the days following Kobe’s death, West strongly advised Bryant that he could “under no circumstances” go and play for “that owner,” referring to then-Clippers owner Donald Sterling and his long history of racism.

It’s also worth remembering what was at stake in the Kawhi free agency sweepstakes. If Leonard had chosen the Lakers, like many among the Lakers thought he would (something West alluded to in the voicemail), he would have formed a league-wrecking superstar trio with LeBron James and Anthony Davis while the Clippers would once again be overshadowed in mediocrity. This was make-or-break for the trajectory of the Clippers’ franchise, at least in the near term.

Lastly, as ESPN’s Bomani Jones already pointed out, Jerry West was far from alone in his view of the Lakers. Summer 2019 feels like a lot longer than 18 months ago, given all that has happened in the world and in the NBA since then. So here is a quick recap:

So yeah, as much as it may sting, you can kind of see where Jerry West is coming from in the midst of all this.

Of course, it all worked out in the end. The Lakers assembled a deep veteran roster behind their two superstars, and the whole team bought in to Vogel’s tough defense-first style. They finished with the best regular season record in the Western Conference and cruised through the playoffs before defeating the Miami Heat in six games to win the NBA Title. In the meantime, the team weathered mountains of adversity off the court, from Bryant’s sudden death to the COVID-19 shutdown to the social justice protests before and during the NBA’s bubble restart.

Even though the Clippers did end up signing Leonard and trading for Paul George to build their own superstar duo, the team dealt with reported chemistry issues all season long that ultimately came to a head during an embarrassing collapse in the Western Conference semifinals.

Despite the divergent paths the Lakers and Clippers have taken in the past 18 months, West’s comments are still not a good look even in context, and I’m sure he is mortified that the tape got leaked out. And though I have nowhere near the expertise regarding legal claims and NBA bylaws to speculate what this means for the court case or league investigation, it seems worth noting that later on in the message, West thanks Wilkes, the Leonard associate, for “all you’ve done” and invites Wilkes and another associate out to dinner so he can “pay my respects.”

But I’ll leave that to the guys who get paid to analyze that stuff. The bottom line is, as hurtful as Jerry West’s comments about the Lakers may seem, I have a hard time getting upset about it. He was just doing his job–a job that West has been as good at as anyone in NBA history.

Though, it’s probably a good thing that the Lakers chose Elgin Baylor to be the face of their 1960s-era throwback and city jerseys.