Knowledge Vs. Experience: Why Most Investors Wind Up Losing 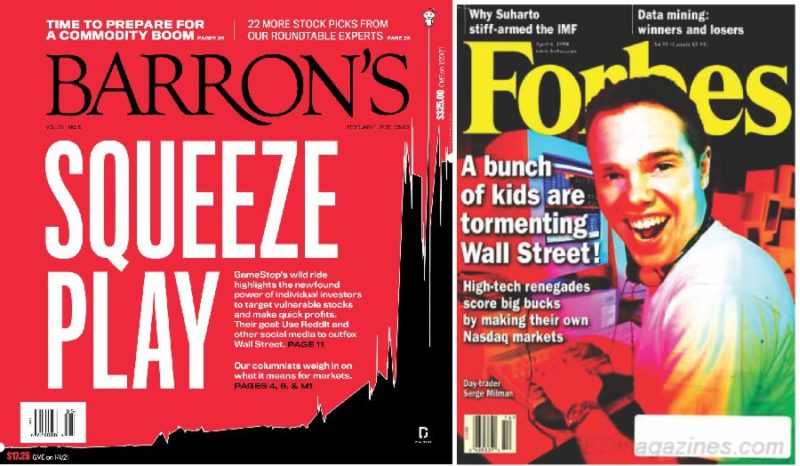 Knowledge vs. experience. When it comes to investing, such is what separates long-term success from failure.

Amid a “market mania,” retail investors believe they have “knowledge” as every investment they make seems to be successful. As the bubble inflates, continued success breeds over-confidence to the point where it is widely believed “this time is different.”

This article was originally written by Lance Roberts of Real Investment Advice.

I previously discussed Charles Mackay’s book “Extraordinary Popular Delusions And The Madness Of Crowds.” As noted, that book was an early study in crowd psychology. To wit:

“Essential is the understanding of the role psychology plays in the formation and expansion of financial manias. From the 1711 ‘South Sea Bubble’ to the 2000 ‘Dot.com crash,’ all bubbles formed from a similar ‘panic’ by investors to chase ongoing speculation.”

For anyone who has lived through two “real” bear markets, the imagery of people trying to “daytrade” their way to riches is familiar. The recent surge in “Meme” stocks like AMC and Gamestop as the “retail trader sticks it to Wall Street” is not new. It wasn’t long after the turn of the century that those with “knowledge” learned the stern “lessons of experience.” There is a fable that explains how little we understand exponential moves.

“A king promised the inventor a reward for inventing the game of chess. The inventor asked for one single grain of rice on the first square of the chessboard, two on the second, four on the third, and so on.

The king thought this request was inexpensive to fulfill but he failed to understand the exponential law of compounding. Once the 64th square was reached, it required 18 quintillion grains. That amount exceeded the total production of the kingdom. Instead of getting his reward, the inventor was killed for fooling his king.”

For some context to the current market exuberance, look at the chart below. The chart often gets put into a log scale to reduce the skewness towards large numbers. However, a non-log chart provides a better visual for this explanation. Pay attention to the exponential growth trend line.

In 1965, Gordon Moore postulated that the number of transistors on a microchip doubles every two years, though the cost of computers gets halved. “Moore’s Law” suggests this growth is exponential.

Along the way, Wall Street adopted this tenet to apply to the stock market, assuming that price trends will go on forever. Notably, the longer a trend goes on, the more permanent it seems to be.

“But for some reason, human beings always extrapolate current trends whether it is population growth or stock market rallies. We know from statements at historical tops like 1929, 1987 or 2000 that anyone, from politicians to investors at the time, believe that the trend will go on for ever and that the world has made a paradigm shift.

Many markets and investments are now going up exponentially and very few forecast an end to this euphoric state.” – Egon Greverz

It isn’t just rising index prices that denote the existence of a “market mania.” It is also the “speculative” actions of investors which are coincident with manias that suggest one is present.

Again, these issues are not new. In one form or another, they have all been present at every prominent market peak in history. While all of this seems to be very common “knowledge,” it is the “experience” that links it together.

“Here is a simple chart that vividly illustrates my view.” – Doug Kass

“At times, the markets can be quite exciting. During the halcyon periods of prosperity and abetted by many (like the financial media who have no dog in the hunt) – traders who act like gamblers are encouraged to ‘play the trend’ and, increasingly do so en masse and as a ‘community.’

History proves this all ends badly and will result (as it did in the early and late 2000s) with an exodus of individual traders/investors out of the markets.

Most of these traders will fail to survive the current market cycle and will not be around in the next cycle.” – Doug Kass

Go back to the S&P 500 index chart above. Note that when the index trades well above the exponential trend line, the outcome was not good.

“Reversions to the mean” happen all the time on Wall Street.

The Benefit Of Experience

Investors all start with knowledge. However, what “bear markets” teach is “experience.” Such is why every great investor in history has a defined set of “investment rules” they follow.

To understand why the “rules” are essential, one must first understand the definition of “risk” related to investing. Howard Marks previously penned a great piece on this concept.

“If I ask you what’s the risk in investing, you would answer the risk of losing money.

But there actually are two risks in investing: One is to lose money, and the other is to miss an opportunity. You can eliminate either one, but you can’t eliminate both at the same time. So the question is how you’re going to position yourself versus these two risks: straight down the middle, more aggressive or more defensive.

What is critical about the “rules” is not what they tell us but how they came to be.

How do you avoid getting trapped by the devil? I’ve been in this business for over forty-five years now, so I’ve had a lot of experience.

It is not surprising with markets surging off the March lows, the Fed flooding the system with liquidity, and the mainstream media trumpeting the news, individuals are swept up at the moment.

However, this is the point where a “can’t lose proposition” tends to be a loser.

A Man With Experience

There is an old WallStreet axiom which states:

Such is the truth about markets and investing.

Experience tends to be a brutal teacher, but through experience, we learn how to build wealth successfully over the long term.

As Ray Dalio once quipped:

Such is why every great investor in history, in different forms, has one basic investing rule in common:

The reason is simple; if you lose your capital, you are out of the game.

Many young investors with “knowledge” today will eventually gain a lot of “experience” by giving most of their gains.

It is one of the oldest stories on Wall Street.