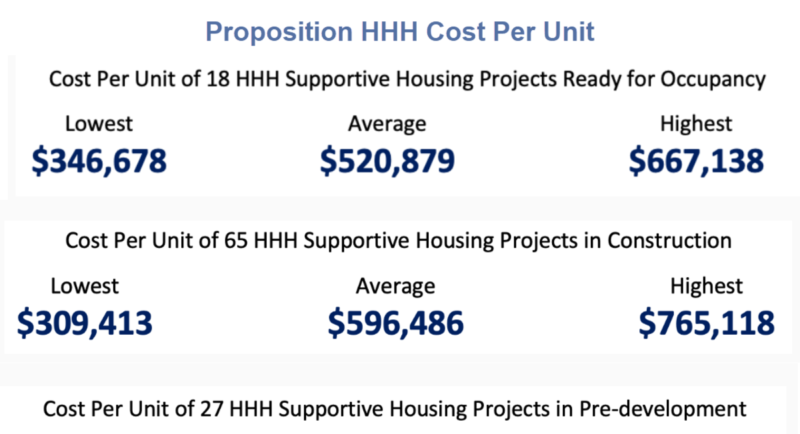 In 2016, the city of Los Angeles had 28,464 Homeless. It passed HHH authorizing $1.2 billion to tackle the problem. Let’s check in on the progress. The controller says “Projects exceeding $600,000 per unit are no longer outliers.“

What about interim housing?

Good question. Although six years have come and gone since HHH passed, the city is just now addressing delays.

Ron Galperin says “The City should use remaining HHH funds—or any HHH funds that become available—to prioritize the development of facilities such as interim housing, clinics, storage, and showers to help better manage the immediate needs of Angelenos experiencing homelessness.”

Q: How much money is left anyway?
A: Less than 5%, according to the audit, and that is a 2018 figure after the city suspended building HHH facilities and still struggles to complete them.

Of the $1.2 billion authorized, we have the same questions, just on a smaller scale.

When Does it Stop?

The report says “Even after housing being built through Proposition HHH is completed, it is likely that tens of thousands of people will remain unsheltered.”

I assure you that whatever the the number of homeless is, be it 45,000 or 75,500 there is an endless demand for free services.

What’s to stop San Diego or Austin, Texas from offering $200 and free bus transportation to LA for willing participants?

Perhaps Austin should consider that right now.  The obvious snag is unlimited demand for a mere 5,600 “free” units.

Some will manage to get to LA from nearby areas even without the free transportation.

There will never be progress in combatting homelessness by building $600,000 units to shelter the homeless.

Paying $600,000 per unit to shelter homeless is inflationary madness.