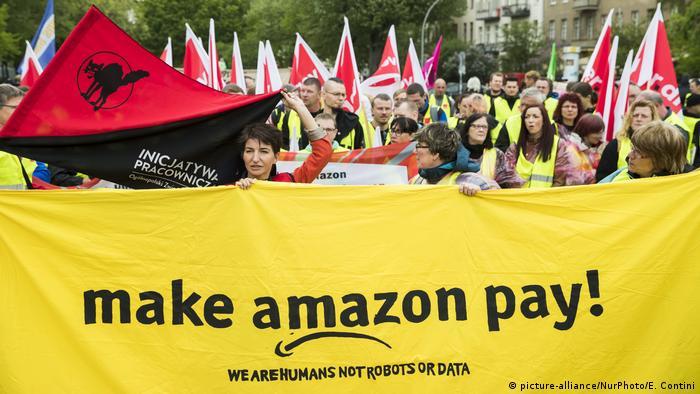 Amazon workers are preparing to strike or protest on Black Friday, ahead of Cyber Monday, in 20 countries as part of a movement called “Make Amazon Pay.”

“We are workers and activists divided by geography and our role in the global economy but united in our commitment to Make Amazon Pay fair wages, its taxes, and for its impact on the planet.

“On Black Friday 26 November 2021, from oil refineries, to factories, to warehouses, to data centres, to corporate offices in countries across the world, workers and activists are rising up in strikes, protests and actions to Make Amazon Pay,” the group’s website said.

The group’s “Common Demands'” the tear-off sheet said, “the pandemic has exposed how Amazon places profits ahead of workers, society, and our planet,” adding, “Amazon takes too much and gives back too little. It is time to Make Amazon Pay.”

There’s been growing discontent among Amazon warehouse employees who barely make a living wage, work long and grueling shifts, and have limited benefits. Some warehouses have tried to unionize (see: here & here), but Amazon has squashed every attempt.

What irks warehouse employees, and Make Amazon Pay highlighted this in their video, is when founder Jeff Bezos told customers, employees “you guys paid for this,” referring to his recent outer space trip.

Make Amazon Pay has released a list of demands it wants for workers:

Make Amazon Pay is being discussed in the anti-work subreddit. One post that discusses plans for a protest has 5k upvotes. The r/antiwork forum has been rapidly expanding this year, with more than 1.2 million members.

There’s no telling how many Amazon employees are set to strike or protest come Friday. Still, one thing is sure, any disruption to warehouses could cause logistical headaches for the largest e-commerce company in the world on the biggest shopping day of the year.