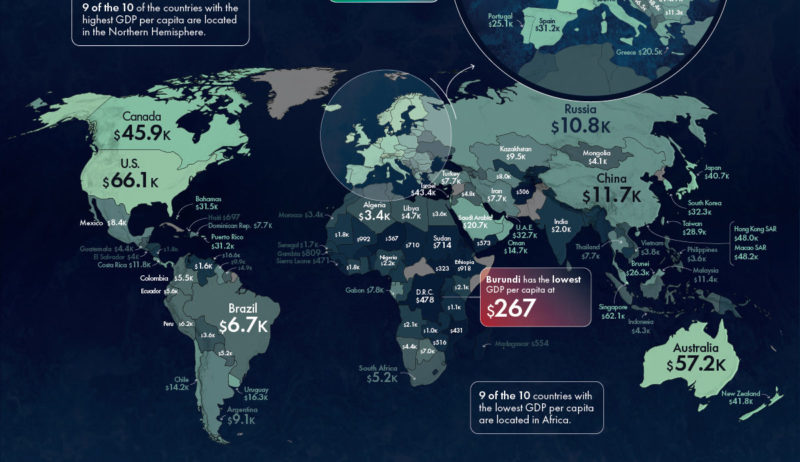 View the high-resolution of the infographic by clicking here.

GDP per capita has steadily risen globally over time, and in tandem, the standard of living worldwide has increased immensely.

This map using data from the IMF shows the GDP per capita (nominal) of nearly every country and territory in the world.

GDP per capita is one of the best measures of a country’s wealth as it provides an understanding of how each country’s citizens live on average, showing a representation of the quantity of goods and services created per person.

The Standard of Living Over Time

Looking at history, our standard of living has increased drastically. According to Our World in Data, from 1820 to 2018, the average global GDP per capita increased by almost 15x.

Literacy rates, access to vaccines, and basic education have also improved our quality of life, while things like child mortality rates and poverty have all decreased.

That said, economic inequality between different regions is still prevalent. In fact, the richest country today (in terms of nominal GDP per capita), Luxembourg, is over 471x more wealthy than the poorest, Burundi.

Here’s a look at the 10 countries with the highest GDP per capita in 2021: However, not all citizens in Luxembourg are extremely wealthy. In fact:

The cost of living is expensive in Luxembourg — but the standard of living in terms of goods and services produced is the highest in the world. Additionally, only 4% of the population reports low life satisfaction.

Although we have never lived in a more prosperous period, and poverty rates have been declining overall, this year global extreme poverty rose for the first time in over two decades.

About 120 million additional people are living in poverty as a result of the pandemic, with the total expected to rise to about 150 million by the end of 2021.

Many of the poorest countries in the world are also considered Least Developed Countries (LDCs) by the UN. In these countries, more than 75% of the population live below the poverty line.

Here’s a look at the 10 countries with the lowest GDP per capita: Life in these countries offers a stark contrast compared to the top 10. Here’s a glance at the quality of life in the poorest country, Burundi:

However, many of the world’s poorest countries can also be classified as emerging markets with immense economic potential in the future.

In fact, China has seen the opportunity in emerging economies. Their confidence in these regions is best exemplified in the Belt and Road initiative which has funneled massive investments into infrastructure projects across multiple African countries.

Prosperity is a very recent reality only characterizing the last couple hundred years. In pre-modern societies, the average person was living in conditions that would be considered extreme poverty by today’s standards.

Overall, the standard of living for everyone today is immensely improved compared to even recent history, and some countries will be experiencing rapid economic growth in the future.

Editor’s note: Readers have rightly pointed out that Monaco is one of the world’s richest countries in GDP per capita (nominal) terms. This is true, but the IMF dataset excludes Monaco and lists it as “No data” each year. As a result, it is excluded from the visualization(s) above.