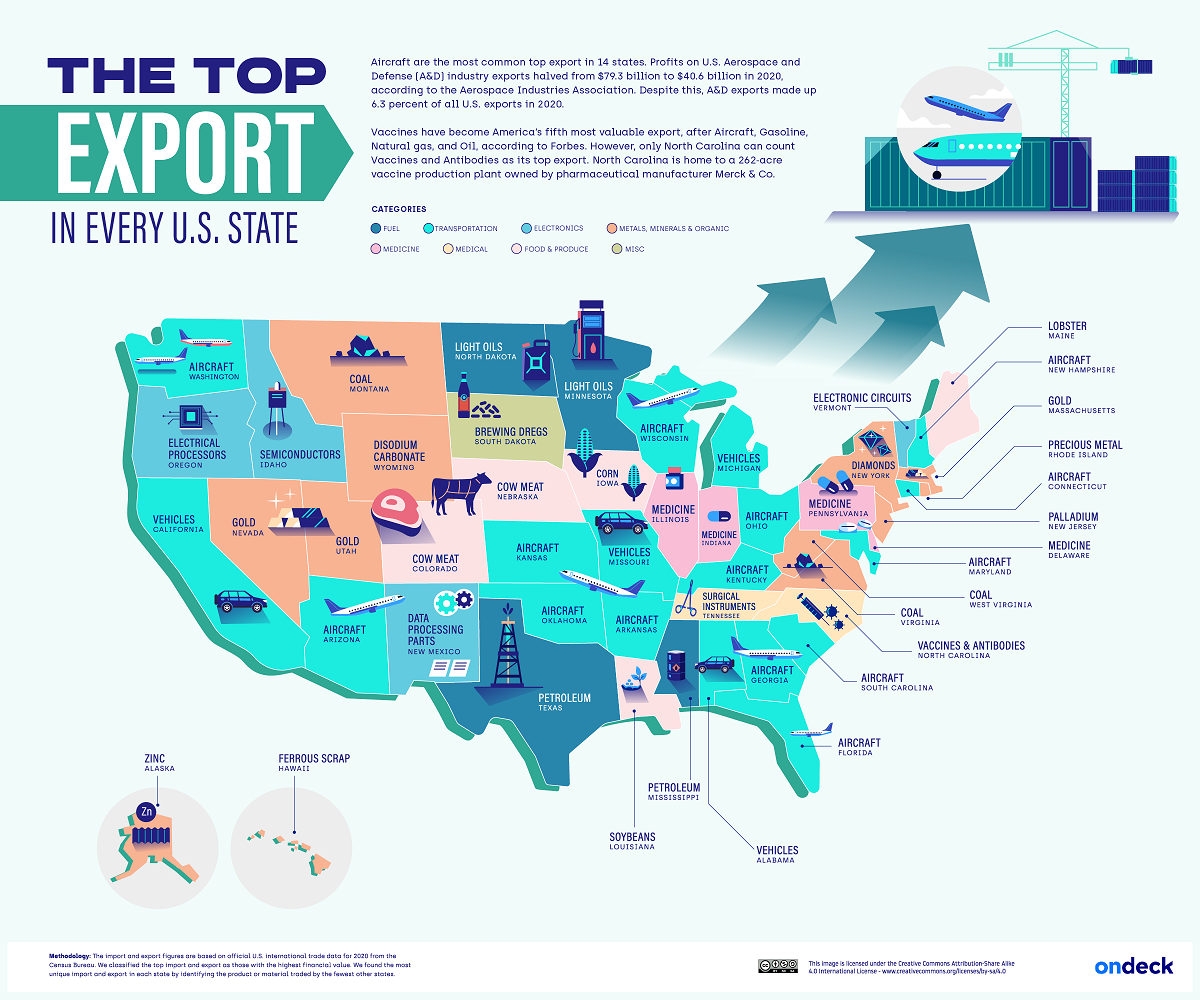 The U.S. exported over $1.3 trillion in goods in 2020, the second-highest amount worldwide.

This article was written by NeoMam Studios and originally published by Visual Capitalist.

While refined petroleum was the top export overall at $58.4 billion, aircraft exports were actually the highest across 14 states—more than any other form of export.

As shown below, Florida, Kansas, and numerous other states all have aircraft (and related parts) as their top export.

Here is the top export category for each state, using 2020 figures.

While the vast majority of the aerospace and defense industry consists of civil aerospace exports, America has also played a significant role in exports of military aircraft. Between 2000-2020, these were worth $99.6 billion, the highest in the world ahead of Russia’s $61.5 billion in military exports. This becomes less surprising when you consider that a new fighter jet can often come with a $100 million price tag.

But there were many different, and more interesting, exports. South Dakota’s top export is none other than brewing dregs, which is the sediment found in brewing beer. The largest importers of these dregs are Mexico, Vietnam, and South Korea. Often, dregs are sold to farmers for use in animal feed.

Meanwhile, the top export for Pennsylvania, Indiana, and Illinois is medicine, while North Carolina has vaccines and antibodies as a top export. In 2020, the U.S. exported over $46 billion in goods critical to combating COVID-19, the second-highest after China ($105 billion).

As the largest exporter of oil in America, Texas produces over 5 million barrels of oil each day, or 1.7 billion annually. Mississippi’s top export was also petroleum, while light oil was the top export in Minnesota and North Dakota. Overall, oil makes up roughly 10% of U.S. exports annually.

The Most Unique Exports, by State

While oil, medicine, and aircraft are the usual suspects for America’s top exports, here are the most idiosyncratic exports for each state. These are defined as those which are exported by the smallest number of other states. Arkansas is the top exporter of rice in America, with the industry valued at $722 million. The rice industry in Arkansas began to grow substantially in the early 1900s, and expanded even more rapidly during World War I & II.

New York, on the other hand, exports more sculptures than any other state thanks to being the epicenter of the art world. The U.S. exported over $12 billion in art and antiques in 2019.

Lobster is the most unique export in Maine, known for its characteristically large claws. The north coast of Maine offers cool waters which lend themselves to more tender and sweeter lobster fare.