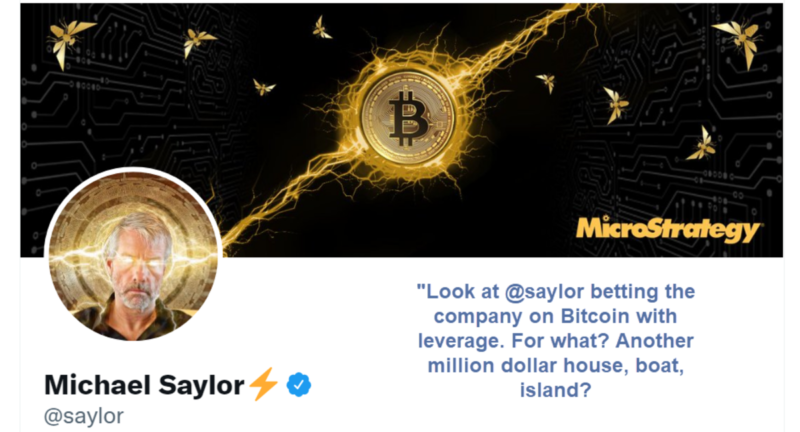 Laser-eyes Bitcoin speculator Michael Saylor blames regulators for the plight he is in.

The world’s largest public holder of Bitcoin called on regulators to finally tackle a laundry list of risky, immature crypto industry practices, or “parade of horribles,” that are unfairly weighing on the price of its asset.

‘Microstrategy CEO Michael Saylor argues the more than 19,000 cryptocurrencies and digital tokens in circulation must be viewed as “unregistered securities” that cannot be likened to a hard commodity like Bitcoin—which has no issuer, no management, no employees, no product cycle, and only a finite supply.

Speaking in a webcast with NorthmanTrader founder Sven Henrich, Saylor said Bitcoin was being caught in the crossfire of a collapsing crypto market since it often served as collateral on margin loans for less proven tokens.

“What you have is a $400 billion cloud of opaque, unregistered securities trading without full and fair disclosure, and they are all cross-collateralized with Bitcoin,” he argued

“The general public shouldn’t be buying unregistered securities from wildcat bankers that may or may not be there next Thursday,” Saylor said, whose company owns 129,218 Bitcoin as of the end of March.

Begging the Government For Help

What a freaking hoot!

Bitcoin is supposed to be the one asset that governments cannot touch and does not need to thrive!

That Saylor is begging government regulators for help is telling. He is worried about a margin call after borrowing money to buy Bitcoin.

He took a loan and bought Bitcoin at an average price over $30,000 and is now a billion dollars in the hole on his investment.

The loan is from a bank and no doubt regulators are looking into that situation. Saylor says he can keep pledging more assets all the way down to $3,500.

But his plea for government help suggests otherwise.

Blood in the Street

“Saylor has enough coins to stay solvent down to 3000$. But at 11,500$ he will refuse to meet the Silvergate margin call. He will have sold 19K coins for 220M. THEY will own them. And liquidate them. THEY are a bank, defending loans on imaginary collateral?”

Saylor bet his entire company on Bitcoin, with borrowed money.

How is it that Saylor did not know all this “wildcat” speculation was going on, given that he was part of it? And how did he not see the Fed-induced liquidity crunch coming?

If selling exhaustion dies at $7,000, he will not have much left.

So Saylor pleads with regulators for help, blaming “wildcat bankers” one of which lent him the money for his pompous bet.

Is this a hoot or what?

Impossible for “You!” to Cash Out

My support points for Bitcoin are posted here: Fundamentally and Technically the Entire Crypto Space is a Huge Mess

Also see The Crypto Crash and Why It’s Impossible For “You!” to Cash Out

You might be able to cash out , but “You!” can’t. Understand the difference.