Money And Payments: The Fed Solicits Input On A New Digital Dollar 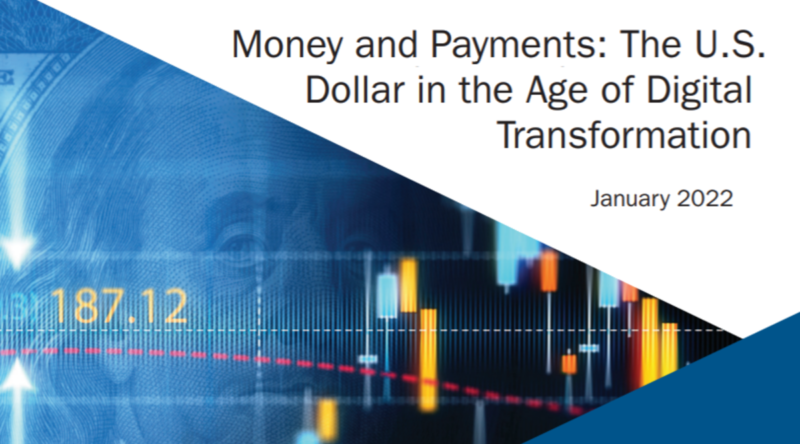 The Fed Solicits Input On a New Digital Dollar. I provide comments on 22 Fed questions.

Inquiring minds are reading a new Fed White Paper proposal Money and Payments: The U.S. Dollar in the Age of Digital Transformation.

These are snips from a 40-page PDF, link above.

For ease in reading I will skip my usual blockquote format but mark the end. Emphasis in italics is mine.

If you are familiar with the issues and the Fed’s goals and just wish to see my comments, please scroll down to “Mish Comments”

Until that subtitle everything is a snip of the Fed publication.

This paper is the first step in a public discussion between the Federal Reserve and stakeholders about central bank digital currencies (CBDCs). For the purpose of this paper, a CBDC is defined as a digital liability of a central bank that is widely available to the general public. In this respect, it is analogous to a digital form of paper money. The paper is not intended to advance any specific policy outcome, nor is it intended to signal that the Federal Reserve will make any imminent decisions about the appropriateness of issuing a U.S. CBDC.

The introduction of a CBDC would represent a highly significant innovation in American money. Accordingly, broad consultation with the general public and key stakeholders is essential. This paper is the first step in such a conversation. It describes the economic context for a CBDC, key policy considerations, and the potential risks and benefits of a U.S. CBDC. It also solicits feedback from all interested parties. The Federal Reserve does not intend to proceed with issuance of a CBDC without clear support from the executive branch and from Congress, ideally in the form of a specific authorizing law.

The Existing Forms of Money

Money serves as a means of payment, a store of value, and a unit of account. In the United States, money takes multiple forms:

• Nonbank money is digital money held as balances at nonbank financial service providers. These firms typically conduct balance transfers on their own books using a range of technologies, including mobile apps.

The U.S. payment system connects a broad range of financial institutions, households, and businesses. Most payments in the United States rely on interbank payment services—such as the ACH network or wire-transfer systems—to move money from a sender’s account at one bank to a recipient’s account at another bank.

Challenges for the Payment System

Cross-border payments currently face a number of challenges, including slow settlement, high fees, and limited accessibility. The sources of these frictions include the mechanics of currency exchange, variations in different countries’ legal regimes and technological infrastructure, timezone complications, and coordination problems among intermediaries, including correspondent banks and nonbank financial service providers. Regulatory requirements related to money laundering and other illicit activities introduce further complications. Finally, certain destination countries for cross-border payments have limited competition, allowing existing providers to charge high fees. As of the second quarter of 2021, the average cost of sending a remittance from the United States to other countries was 5.41 percent of the notional value of the transaction. These high costs have a significant impact on households that make remittance transactions.

Technological innovation has recently ushered in a wave of digital assets with money-like characteristics. These “cryptocurrencies” arose from a combination of cryptographic and distributed ledger technologies, which together provide a foundation for decentralized, peer-to-peer payments. Cryptocurrencies have not been widely adopted as a means of payment in the United States.

They remain subject to extreme price volatility, are difficult to use without service providers, and have severe limitations on transaction throughput. Many cryptocurrencies also come with a significant energy footprint and make consumers vulnerable to loss, theft, and fraud. Stablecoins are a more recent incarnation of cryptocurrency that peg their value to one or more assets, such as a sovereign currency or commodity. Stablecoins pegged to the U.S. dollar are predominantly used today to facilitate trading of other digital assets, but many firms are exploring ways to promote stablecoins as a widespread means of payment.

A full discussion of stablecoin arrangements is outside the scope of this paper. However, the President’s Working Group on Financial Markets (PWG), along with the Federal Deposit Insurance Corporation (FDIC) and the Office of the Comptroller of the Currency (OCC), recently published a report on payment stablecoins.

The Federal Reserve will continue to explore a wide range of design options for a CBDC. While no decisions have been made on whether to pursue a CBDC, analysis to date suggests that a potential U.S. CBDC, if one were created, would best serve the needs of the United States by being privacy-protected, intermediated, widely transferable, and identity-verified.

Privacy-protected: Protecting consumer privacy is critical. Any CBDC would need to strike an appropriate balance, however, between safeguarding the privacy rights of consumers and affording the transparency necessary to deter criminal activity.

Identity-verified: Financial institutions in the United States are subject to robust rules that are designed to combat money laundering and the financing of terrorism. A CBDC would need to be designed to comply with these rules. In practice, this would mean that a CBDC intermediary would need to verify the identity of a person accessing CBDC, just as banks and other financial institutions currently verify the identities of their customers.

Potential Benefits of a CBDC

A CBDC could potentially serve as a new foundation for the payment system and a bridge between different payment services, both legacy and new. It could also maintain the centrality of safe and trusted central bank money in a rapidly digitizing economy.

Cash is currently the only central bank money that is available to the general public, and it remains an important and popular means of payment. According to a 2020 survey, U.S. consumers used cash for 19 percent of total transactions (6 percent by value). The Federal Reserve is committed to ensuring the continued safety and availability of cash and is considering a CBDC as a means to expand safe payment options, not to reduce or replace them.

Banks currently rely (in large part) on deposits to fund their loans. A widely available CBDC would serve as a close—or, in the case of an interest-bearing CBDC, near-perfect—substitute for commercial bank money.

This substitution effect could reduce the aggregate amount of deposits in the banking system, which could in turn increase bank funding expenses, and reduce credit availability or raise credit costs for households and businesses. Similarly, an interest-bearing CBDC could result in a shift away from other low-risk assets, such as shares in money market mutual funds, Treasury bills, and other short-term instruments. A shift away from these other low-risk assets could reduce credit availability or raise credit costs for businesses and governments. These concerns could potentially be mitigated by CBDC design choices. A non-interest-bearing CBDC, for example, would be less attractive as a substitute for commercial bank money. In addition, a central bank might limit the amount of CBDC an end user could hold.

Safety and Stability of the Financial System

Because central bank money is the safest form of money, a widely accessible CBDC would be particularly attractive to risk-averse users, especially during times of stress in the financial system. The ability to quickly convert other forms of money—including deposits at commercial banks—into CBDC could make runs on financial firms more likely or more severe. Traditional measures such as prudential supervision, government deposit insurance, and access to central bank liquidity may be insufficient to stave off large outflows of commercial bank deposits into CBDC in the event of financial panic.

Over the long term, the Federal Reserve might have to increase the size of its balance sheet to accommodate CBDC growth, similar to the balance-sheet impact of issuing increasing amounts of physical currency. This need would be mitigated to the extent that demand for the CBDC represented a shift, directly or indirectly, away from the Federal Reserve’s nonreserve liabilities, including physical currency. Additionally, the Federal Reserve would likely need to increase the level of reserves on average, in order to provide an adequate buffer against unanticipated increases in CBDC. Such surges could otherwise push the aggregate quantity of reserves in the banking system below the “ample” level and put upward pressure on the federal funds rate.

The interactions between CBDC and monetary policy implementation would be more pronounced and more complicated if the CBDC were interest-bearing at levels that are comparable to rates of return on other safe assets. In this case, the level and volatility of the public’s demand for CBDC could be quite substantial. Consumers, businesses, and potentially others could decide to pare their holdings of bank deposits, Treasury bills, and money market mutual fund investments and increase holdings of CBDC.

First, the Fed produced a generally well-balanced synopsis, especially of the benefits.

Its concerns on the risks are due primarily to its interest rate manipulation schemes, inflation bias, and fractional reserve lending in general.

The white paper also made a huge error in its assertion “Banks currently rely (in large part) on deposits to fund their loans.”

The Bank of International Settlements publication The Bank Lending Channel Revisited gets the horse in front of the cart.

Banks lend when they perceive they have good credit risks, provided they are not capital impaired.

It is very disconcerting that the Fed seems to have no idea how lending works.

I have commented on this many times before but the Fed’s fear of deflation is also ass backward.