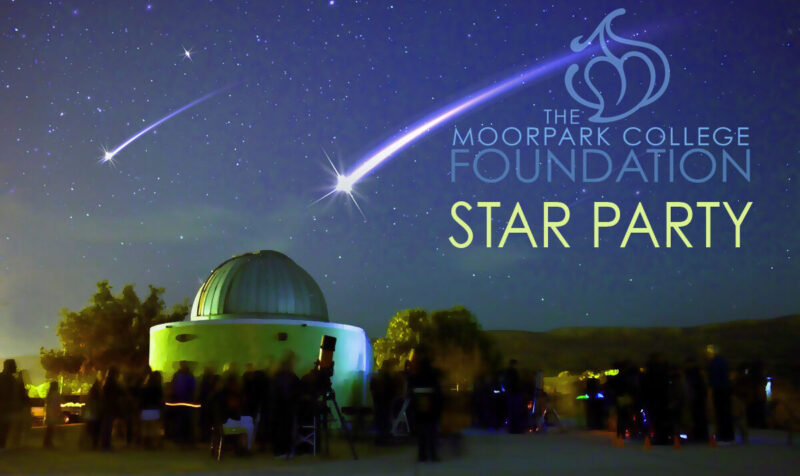 Moorpark College Astronomy faculty and the Ventura County Astronomical Society will kick off the summer’s final Star Party with guest speaker Kevin McKeegan, who will provide a short lecture on meteorites.

McKeegan is a Professor of Geochemistry and Cosmochemistry in UCLA’s Department of Earth, Planetary, and Space Sciences, where he served as Department Chair from 2012-16.

The event will take place at 6:30 p.m., Saturday, Sept. 17, at the Moorpark College Observatory.

Moorpark College Astronomy Professor Hal Jandorf will provide a walk through the summer stars, constellations, planets, and other objects in the evening sky at 7:30 p.m.

Saturn, nebulae, star clusters, and galaxies will be visible through the telescopes set up by the VCAS. A trip through the observation dome will be the evening’s highlight.

“Star Parties are always special because the community can learn about the night sky, learn the constellations, look through dozens of powerful telescopes, and learn more about the universe. Wait until you see Saturn for the first time! It’s not a photo in a book or on a computer monitor. It’s a real image in your retina,” Jandorf said.

The event is free for all ages (ages 6 and up are recommended). Seating is first come, first served. Attendees are advised to bring cushions for the concrete seating, a light jacket, and binoculars. No pets are allowed.

This year’s series of star parties have drawn crowds of 250 to 300 people at each event with the help of the Moorpark College Foundation and the VCAS.

“We were overwhelmed by the number of interested families and visitors that attended the events. The observatory is waking up from a lack of use during the pandemic and is a wonderful tool for education and outreach for the public,” Jandorf said.

“I think the combined efforts of VCAS and the Foundation will make the observatory a shining star again,” he said.

Debi Klein, Chief Development Officer of the Moorpark College Foundation said the observatory enables students to participate in courses and labs and allows the college to share this experience with our neighbors and the community.

“The observatory provides a valuable resource for learning about the cosmos, but it’s also a way the college can share its resources with the community at large. Facilities like this allow us to be a part of the community. The Moorpark College Foundation has proudly sponsored the observatory and astronomy programs for more than three decades.” she said.

While this is the last event of the year at the observatory, Molly Shelton, a Power Systems Engineer at NASA’s Jet Propulsion Laboratory in Pasadena will speak at 7 p.m., Friday, Oct. 21, at the Moorpark College Forum in the Applied Arts Building. The Astronomy Department, VCAS, and the Moorpark College Foundation coordinate the event.

Kevin McKeegan is a Professor of Geochemistry and Cosmochemistry in UCLA’s Department of Earth, Planetary, and Space Sciences, where he served as Department Chair from 2012-16. McKeegan earned a bachelor’s of science from St. Lawrence University and his doctoral degree. from Washington University (St. Louis) in 1987. He is co-director of the National Science Foundation/UCLA National Ion Microprobe Facility and is an expert on the isotopic and chemical compositions of a wide variety of extraterrestrial samples.

McKeegan held a Roger Chaffee Astronaut Fellowship at Washington University and is a Fellow of the Meteoritical Society, the American Geophysical Union, the Geochemical Society, and the European Association of Geochemistry. In recognition of his contributions to meteorite science, asteroid 5663 was named McKeegan by the International Astronomical Union in 2002.

Molly Shelton is a Power Systems Engineer at Jet Propulsion Laboratory in Pasadena. She is an early career hire, graduating from college with a bachelor’s of science in physics in 2016 and joining the Power and Sensor Systems group to design, build and test hardware for missions throughout the solar system. She has worked on a handful of projects in her four years at JPL including Dawn, SHERLOC, and Europa Clipper. She started her path to JPL in a high school robotics club and is honored to be able to share her story thus far with those who yearn for the stars in the same way.