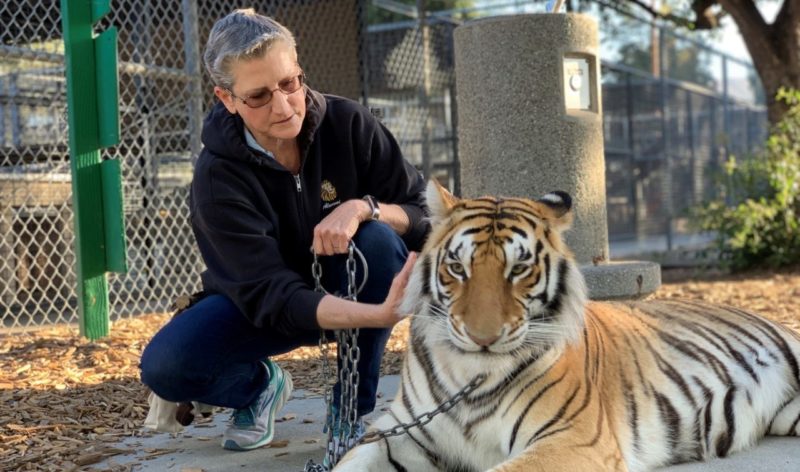 Moorpark, Calif. (June 28th, 2021) –After a 40 year career in the animal care field, Operations Supervisor Michlyn Hines has been awarded the American Association of Zoo Keepers (AAZK) Lifetime Achievement Award for her commitment to the animal care profession and contribution to the zoological community. She is the first person at America’s Teaching Zoo at Moorpark College to receive this prestigious honor.

“Michlyn started in July of 2001, coming to Moorpark College from the Los Angeles Zoo. She has blessed the zoo with her determination, organization and love of wildlife. Some of the projects Michlyn implemented have been huge improvements for the animals, zoo guests and students,” said Zoo Development Coordinator Mara Rodriguez. “America’s Teaching Zoo will miss Michlyn Hines and congratulates her on her well-deserved retirement!”

Hines will be retiring this year after 20 years at Moorpark College. She has been instrumental in the execution of Ira’s Kingdom, the Alumni Aviary and the paved zoo roads, just to name a few projects she has overseen from start to finish.

She has spent her last days working at the zoo and is tirelessly moving forward with the zoo’s maintenance and operations supervisor on the plans and bids for the zoo’s new tiger habitat, to begin construction in 2022.

Hines learned she was nominated and selected during an intimate retirement gathering organized by the zoo staff.

The AAZK Lifetime Achievement Award was established in 1993 by the Awards Committee and is awarded to deserving professional members during the last phase of their careers, early in their retirement or posthumously. Professional members can be nominate for the award after a minimum of 20 years or have been employed for 20 years of combinative service within the zoo or aquarium profession. They can be nominated by two of their peers who have also been employed at the same facility at the same time as the nominee.

Moorpark College is one of three colleges in the Ventura County Community College District and annually serves more than 14,000 students. Founded in 1967, Moorpark College is fully accredited and has the highest six-year completion rate within the California Community College System. The Campaign for College Opportunity named Moorpark College a 2019 Champion of Higher Education for the Associate Degree for Transfer Pathway. It is also a designated Hispanic-Serving Institution. The college’s signature career/technical programs include nursing, radiologic technology, biotechnology and journalism. The college’s America’s Teaching Zoo is the only associate degree exotic animal training program in the country. To learn more, visit MoorparkCollege.edu or follow @MoorparkCollege on social media.