Movie Theaters Vs. The Studios 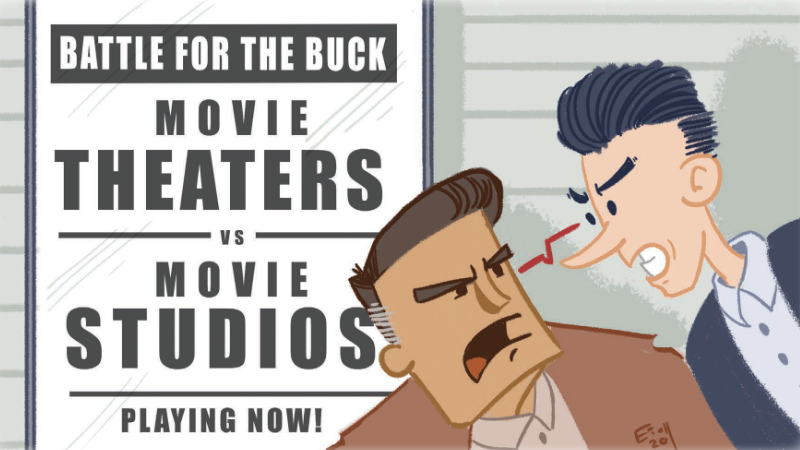 In 1905, the first movie theater in the United States opened in Pittsburgh. Before 1905, there were little picture show houses in Frontier Cities in the West, but this 1905 year is looked at as the beginning of what we would consider the dawn of movie theaters.

On July 28th, Universal Studios and AMC Theaters made a landmark deal: Universal’s films would only have to play in AMC’s theaters for three weeks, after that, their movies are free to move onto home entertainment. This decision was seen as a surprise on account of the fact that AMC and Universal were engaged in a public spat, over the fact that Universal has been publicly pushing harder than any other studio to reduce the amount of time a film has to be in theaters before it can go to home entertainment. The movie theater industry has been fighting this move as hard as they can, because once film studios start bypassing them and go directly to the consumer with their best products (big-budget films), they know that their time of existence becomes limited.

The other film studios and other large movie theater chains have slammed this agreement, and the conflict between how long a film has to be out before leaving theaters has been heating up all year long. Needless to say, this decision may end changing the industry forever.

The 2020’s film lineup did not look as good or as promising as 2019’s, on account of the biggest superhero movie ever, ‘Endgame,’ the live-action versions of ‘The Lion King’ and ‘Aladdin,’ and the sequel to ‘Frozen’ all coming out in 2019. With that said, 2020 was slated to have a fairly decent, if not somewhat weaker film lineup, but it was not forecasted to be a disastrous year for films. From ‘Tenet,’ to ‘Top Gun 2,’ to ‘The Black Widow’ standalone film, to the ‘Sonic the Hedgehog’ movie, there was some optimism for the movies that were supposed to be released this year.

This all changed when COVID-19 made its way to America.

The virus has had many significant and negative impacts on American society. One problem that it has caused, that has gone under the radar, is the growing all-out-war between Movie Studios and Movie Exhibitors, i.e., Movie Theaters.

Without becoming overly specific about the film industry, the biggest thing to take note of is that the movie exhibitors/movie theater industry has a different model for making money than the film studios do. Movie theaters only make money by showing the big studios’ films at their cineplexes (and the concession sales they make at their locations). Studios have different arrangements with movie theaters, but typically, there is some kind of deal made for every dollar that movie theaters bring in where the studios will get their cut, and then the movie theaters will get their money. Studios make money by offering numerous products and services, and the money they make from the box office is just one source of revenue for them.

This leads us to the agreement that Universal and AMC have made; the decision to reduce the release window, by which a film has to abide, before it is allowed to move onto home entertainment platforms.

From the studios’ standpoint, since March, they are losing money like never before, and since they are such large entities, they need to do anything and everything they can to make money. With the advent of streaming services, consumers have more access than ever to high-quality content all in one place (at least each streaming service offers hours and hours of entertainment, even if a great deal of what they are offering is mediocre at best). One way that they can make money is by bringing in and keeping people on their streaming platforms, and the best way to do that is by adding new content on a regular basis. That content can be in the form of shows, documentaries, and of course films.

The conflict between the studios and movie theaters boils down to money. The studios want to move their films onto their platforms faster because they want to keep their monthly subscribers subscribed by adding new content that will keep them around, movie theaters need movies to say in their cineplexes because they only make money when someone buys a ticket and sees a movie in-person.

As time goes by, the conflict between these two sides will most likely dissipate, and if the film studios are allowed to purchase movie theaters (about which there have been talks), then more likely than not, the studios will simply add another branch in their sprawling web of businesses and services by purchasing cineplexes.