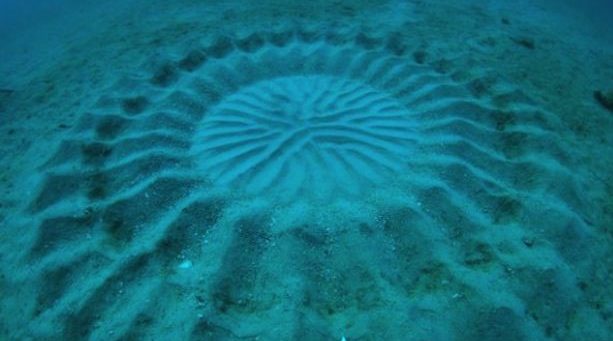 As an anomaly typically considered to be a generally British phenomenon (with sprinklings of occurrences throughout Europe and the United States), crop circles are typically discovered in crop fields, hence the name. With the recent discovery of a crop circle-esque formation found off the coast of Western Australia, however, it appears that this on-land anomaly has decided to make its way “down under”- both figuratively and literally.

This article was originally published on Medium.com.

An underwater research crew has discovered what appears to be crop circle formations and, while we typically attribute the emergence of crop circles to the work of extraterrestrials (though this hasn’t been proven), these underwater crop circles are certainly the work of something “alien”.

Upon observing the video of the crop circles taken by marine ecologist Todd Bond and researchers from the University of Western Australia in Perth at a depth of 100 meters on Australia’s North West Shelf, behavioral ecologist Elisabet Forsgren said that, “It is surprising to find the circles … at a depth where there is not much light.”

Todd Bond and his team, however, knew what these circles were almost immediately. In coming across these underwater crop circles while conducting a marine life survey on the North West Shelf, he and his team found an unusual pattern on the ocean floor that almost appeared man-made. Upon closer examination, it was hard to deny how similar these markings appeared to the crop circles that have become wildly popular in today’s pop culture. Further, Bond could say with confidence that the patterns were in fact the work of an “alien species”.

“We were doing a survey of fish on subsea infrastructure and I knew exactly what they were straight away,” Bond said. “As far as we know, up until now, there’s only one species of pufferfish that makes these circles and that’s the white-spotted puffer. We recognized the circles from a BBC documentary which had some amazing footage of how these pufferfish make these circles in Japan.”

In watching a BBC documentary centered around the white-spotted pufferfish, a species found exclusively in the waters of Japan, Bond remembers seeing very similar patterns which the fish make on the ocean floor in order to communicate about, strangely enough, growing crops. “The males take about a week to make these quite elaborate nests and then the female will go from nest to nest. She’ll decide which one she wants to lay her eggs at and she’ll lay her eggs at the center of the circle,” Bond says.

Similarly to how we view the purpose of on-land crop circles as being a way for extraterrestrials to communicate with each other (or even us), the male white-spotted pufferfish makes elaborate patterns on the ocean floor in order to attract their female counterparts into laying their eggs there, becoming a nest for the next “crop” of white-spotted pufferfish. That being said, we know what is responsible for the underwater crop circles found off the coast of Australia and it isn’t quite as exciting as off-world visitors (depending on how you feel about fish, of course). Still, there is one mystery that remains surrounding the emergence of these underwater crop circles. If white-spotted pufferfish are exclusively found in Japan, what are they doing all the way in Australia? That, it appears, is where Bond and his team find themselves scratching their heads.

In Bond’s personal opinion, the most likely explanation for the formation of these mysterious underwater crop circles can be attributed to either a new species or a mutant alien-esque version of the Japanese white-spotted pufferfish that we know of today. This is because the Australian crop circles were found at around 100 meters while the Japanese white-spotted pufferfish is known for never creating their elaborate designs below a depth of 30 meters at most. On top of that, there has never been any reported sightings of a pufferfish species seen swimming at such a depth. The underwater camera used to capture footage of the mysterious crop circles, however, did capture a few pufferfish fleeing the area- further reinforcing Bond’s assumption that the species responsible is something we have yet to discover.

So why are white-spotted pufferfish, if they are the culprit, suddenly appearing all the way in Australia? If they are not responsible and a mutant version of their species is swimming in the depths of Australia’s waters, where are they? While these are interesting questions that go unanswered for now, it would seem that they offer a more realistic explanation of these mysterious underwater crop circles than extraterrestrials leaving each other notes in cornfields.

Until we can find the answer, marine biologists are hard at work searching for more of these fascinating underwater crop circles in Australia’s waters in an effort to uncover a previously undiscovered species. Considering that we know more about the surface of the moon than we do about what is lurking in the depths of our world’s oceans, they clearly have their work cut out for them. I wonder what else they may uncover in their search.